Billionaire Tax Cheat Travels to Space for a Few Minutes 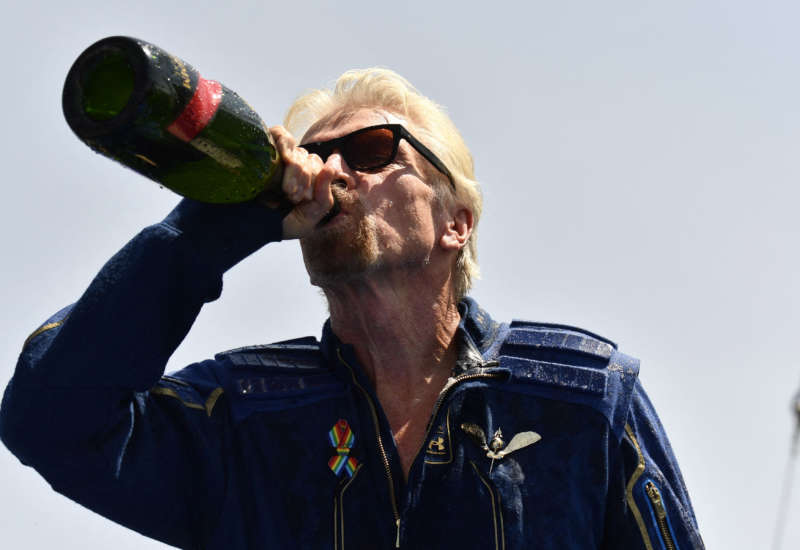 It isn’t often that we see a New York Times paragraph so freighted with syrup and honeyed goo, but there it was on Sunday afternoon, like something you’d order at IHOP to beat back a hangover: “Soaring more than 50 miles into the hot, glaringly bright skies above New Mexico, Richard Branson at last fulfilled a dream that took decades to realize: He can now call himself an astronaut.”

Better lede: “Fulfilling his desire to beat a fellow billionaire into the lowest verge of space, notorious tax cheat Richard Branson burned some of the money he owes his home country in order to fling himself past the troposphere so he could experience weightlessness for as much time as it takes to make a decent bowel movement. An achievement that will go down in corporate history, Branson now holds bragging rights over the guy whose monopolies are eating the economy alive.”

Not what I’d call the right stuff.

When I was 12 years old, I got in trouble because of space. In 1983, my friend Andrew and I went to the Circle Cinema to see The Right Stuff for real, Philip Kaufman’s soaring film based on the Tom Wolfe book about the early days of space travel. I didn’t tell the person picking us up that the movie was more than three hours long, because I didn’t know, and didn’t notice once I was inside. I was utterly captivated from the moment Levon Helm spoke the opening words: “There was a demon that lived in the air. They said whoever challenged him would die.” I emerged from the theater with stars in my eyes to find my ride, who had been lapping the block for more than an hour, red-faced and furious from having been made to wait.

I was gone, and a fair portion of me still resides in the little palace of wonder that was constructed 37 years ago by that masterpiece of propaganda… because it happened. Astronauts strapped themselves to the nosecones of fluky missiles and dared the thing to kill them before they got home again. Later, they jumped into shuttles that got more perilous to fly with each passing year, and some of them came home in tiny smoldering pieces.

In the intervening years, we have borne witness to moonwalks, Mars landings, the exploration of Saturn, the majesty of the Hubble telescope, and the daunting yet thrilling idea that somewhere out there, farther from Earth than anyone has ever been, the Voyager deep space probe — seeking other intelligent life — is carrying music made by Aboriginal Australians, percussion from Senegal, Mozart, Bach, a Navajo night chant, and the blues lamentations of Blind Willie Johnson, who died penniless in 1945 after sleeping in the rainy ruins of his burned-down house.

I get the argument against space exploration: Public money should be used to help people here on Earth instead of chasing stardust beyond the atmosphere, and the “space race” lionized by The Right Stuff was a well-orchestrated propaganda arm of the Cold War. Shifting the burden of financing these endeavors to the private sector frees up desperately needed funds for, well, everybody. So they say, anyway.

Something in me still cleaves to the dream of space exploration, however, and no amount of pragmatism about funding can shake it loose.

Because of the Hubble Deep Field.

This corporate billionaire space race? You can keep it.

Please look at this image closely. First taken by the Hubble Space Telescope in 1995, the “Deep Field” is a series of pictures of a black spot of space the size of a grain of sand held at arm’s length. Once the exposures were done, the pictures revealed thousands of galaxies in that one tiny dot. Thousands of galaxies, with millions of stars and billions of planets. Spread that dot across 360 degrees of sky, and you are confronted with an incredibly crowded universe and the astonishment of time travel — the galaxies shown are billions of years old now — wonders stacked upon wonders, and the likelihood of life somewhere out there if the Law of Large Numbers has any meaning.

The Hubble Deep Field altered my perspective forever. It happened because public money was spent on it. The spark of discovery fires the imagination. I bow to the counter-argument about funds needed elsewhere, but I will always be that kid in the dark theater way back in Reagan’s first term when we all expected to die in a pillar of nuclear fire. On that screen was wonder, a reach for achievement, and hope. There is something magical about that aspect of the human experience.

But this corporate billionaire space race? You can keep it. Billionaire Jeff Bezos is slated to blast off on his own tax-free ego project in nine days, and the corporate media will fawn over it as they did for Branson on Sunday. Corporate news treating a corporate space race like the Armstrong landing? Sounds like savvy marketing to me, but it leaves inspiration in ashes.

What’s to follow? The first trillionaires racing each other to the moon to see who can carve their corporate logo into the dust and rock so the whole planet can see it every night, whether they want to or not? You know that’s next, right? Of course it is, and the corporate media will lavish praise on it like they did all day on Sunday. Never mind that space is the most inhospitable environment we’ve ever encountered as a species, so billionaire dreams of sipping poolside champagne with a full view of Earth are, to be blunt, unrealistic.

Space travel used to be about “us,” a collective effort by the country to reach beyond previously unreachable limits. That was the Cold War propaganda, anyway, and it had an unavoidable allure. Now, it’s about “them,” the 0.1 percent who hide their fortunes and use those revenues to give their egos a televised tongue-bath in zero-g, followed by a gala event suffused with celebrities. Space exploration is now a plaything for those who already exist in an alien atmosphere. I’m pretty sure Chuck Yeager would not be impressed.