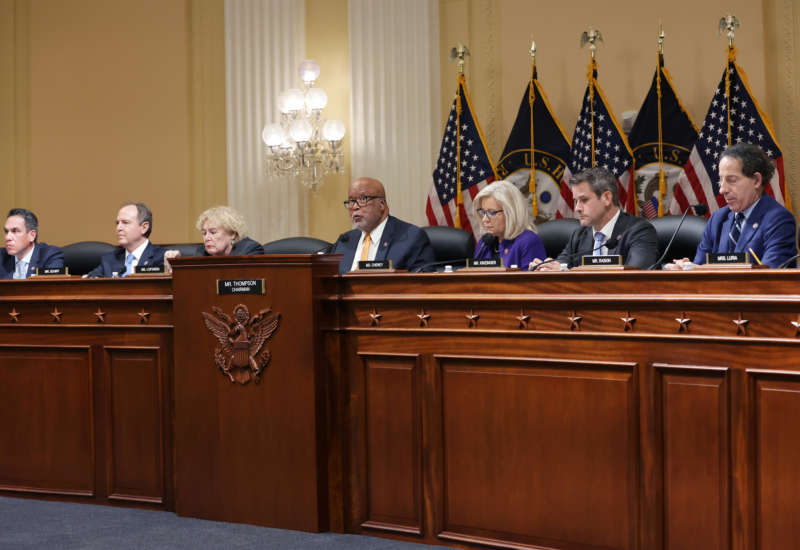 The U.S. House Select Committee to Investigate the January 6th Attack on the United States Capitol is looking to boat a big, weird fish. John Eastman, a true bat from the conservative D.C. think tank belfry, is expected to be subpoenaed by the committee over his role in attempting to overthrow the results of the 2020 presidential election. More specifically, the committee would like to have words with Mr. Eastman over the memo he wrote for Trump’s legal team that was nothing more or less than a blunt blueprint for toppling the certification of a free and fair election.

A product of the Federal Society’s right-wing lawyer assembly line, Eastman is one of a thousand GOP lawyers slobbering around the nation’s capital providing grist for the nonsense mills at Fox News, OAN and a galaxy of talk radio shows. If the name rings a bell, it’s because he gained some notoriety in 2020 by writing an op-ed for Newsweek claiming that Kamala Harris was not a true U.S. citizen, and therefore could not serve as vice president. Yeah, that guy.

Over the course of his career, Eastman clerked for Justice Clarence Thomas, worked at the law firm of Kirkland & Ellis (made famous by one of its former partners, Ken Starr), and did some nationally syndicated radio with Hugh Hewitt. He got his ass beat sideways in a 1990 House race and a 2010 run for California attorney general, with the latter eventually being won by none other than Kamala Harris. He is chairman of the board of the National Institute for Marriage, which opposes same-sex marriage, and is a director with the Public Interest Legal Foundation, which exists to attack elections with frivolous lawsuits.

It was likely his work with Public Interest that drew him into the spiraling orbit of Trump’s frantic post-election attempts to overthrow the results, and it was the memo he wrote for Trump’s doomed cause that has brought him to the attention of the select committee. Titled “January 6 scenario,” the document does not equivocate about its purpose and ultimate goal.

“There is very solid legal authority,” reads the opening paragraph, “and historical precedent, for the view that the President of the Senate does the counting, including the resolution of disputed electoral votes (as Adams and Jefferson did while Vice President, regarding their own election as President), and all the Members of Congress can do is watch.”

Eastman then dives in with both feet, citing the Electoral Count Act even as he declares it “likely unconstitutional.” He then lays out a step-by-step process by which then-Vice President Mike Pence refuses to certify the Electoral College votes in seven states, including Arizona. This would knock the total Electoral College vote count down to 454, and thanks to the seven states chosen to be withheld, this new accounting awards Trump the presidency by a count of 232 to 222.

A product of the Federal Society’s right-wing lawyer assembly line, Eastman is one of a thousand GOP lawyers slobbering around the nation’s capital.

“Howls, of course, from the Democrats,” begins Eastman’s explanation of the second phase of the operation, “who now claim … that 270 is required. So Pence says, fine. Pursuant to the 12th Amendment, no candidate has achieved the necessary majority. That sends the matter to the House, where the ‘the votes shall be taken by states, the representation from each state having one vote….’ Republicans currently control 26 of the state delegations, the bare majority needed to win that vote. President Trump is re-elected there as well.”

This was the mind bomb that was dropped on Pence prior to the January 6 certification of the election. According to Trump and his team of legal galaxy brains, the Eastman document was all the justification Pence needed to overturn the results. Pence wobbled badly, but ultimately refused to go along with the scheme.

On that day, on the other side of town, Eastman was one of the speakers who helped whip Trump’s followers into the violent frenzy that resulted in the sacking of the Capitol, and could possibly have resulted in Pence’s murder had the former vice president not been so fleet of foot.

You can see why the select committee wants to have Eastman in for a chat. Eastman, for his part, has been contorting himself into bold new shapes trying to dodge the idea that he wrote the roadmap for democracy’s Armageddon. In an unusually pugnacious National Review interview, Eastman tried to argue that a push to get Pence to overturn the results was “not viable,” dismissing anyone who thought otherwise.

The Claremont Institute, which employs Eastman, took this absurd argument to new heights by claiming the memo did not, in fact, ask Pence to overturn the election. “The defense is among the most carefully worded straw-man arguments in modern political history,” argues Aaron Blake for The Washington Post. “Essentially, the [Claremont] statement isn’t disputing that Eastman provided a ready-made procedure for Trump and Pence to get the election overturned — he clearly and unambiguously did so — it’s that he didn’t explicitly say Pence should overturn it himself.”

These are the fun details the select committee would like to parse with Mr. Eastman. They are prepared to subpoena him but would prefer if he testified voluntarily. To date, at least five Trump administration staffers have volunteered their testimony in this fashion.

“That engagement, be it voluntary or compelled, already appears to be yielding damning information,” writes Eric Lutz for Vanity Fair, who points to the explosive recent report by Rolling Stone as evidence. Only former Trump adviser Steve Bannon has refused to comply with a subpoena, and he now has a whole new legal adventure rolling out before him. Stay tuned.