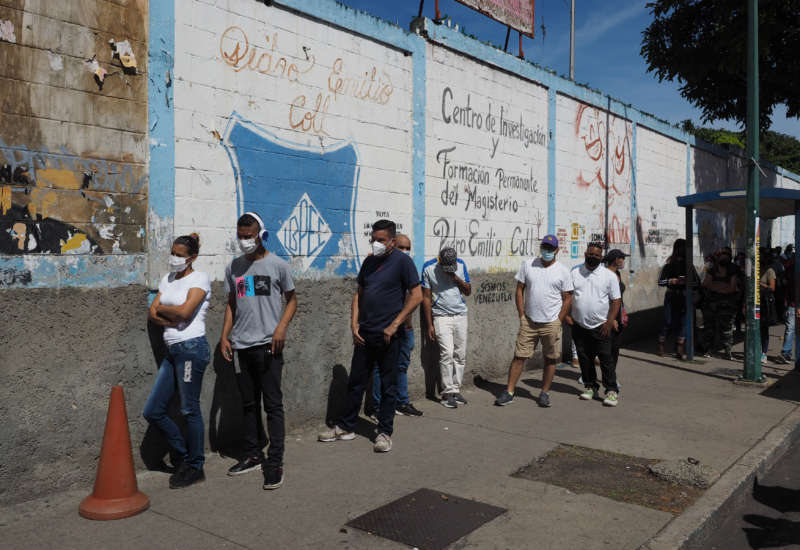 The United Socialist Party of Venezuela secured a resounding victory in Sunday’sregional and local elections, which were defined by the return of obstinate far-right political parties to Venezuela’s democratic process after years of United States-backed destabilization efforts and violent regime-change plots.

Preliminary results from the country’s electoral authority showed Chavistaswinning up to 20 of the 23 governorships that were up for grabs. The results cemented the ruling socialists’ dominance over a political opposition that has struggled to unite under a cohesive strategy and banner after years of violent political schemes that failed to oust President Nicolás Maduro from power despite the opposition having considerable bipartisan support from the U.S. political establishment, which maintains a punishing sanctions regime on the country.

United Socialist Party of Venezuela supporters and sympathizers celebrated their victory, taking to the streets even before results were announced.

“We believe it is significant that we won 20 of 23 of the state contests — the math does not lie,” said Abril Viscaya, a political organizer and member of FrenteRevolucionario Artístico Patria o Muerte (or “Homeland or Death Revolutionary Artistic Front”), in an interview with Truthout. “We must remain on this pathway of participation; we are a people that are not willing to surrender in the face of unilateral coercive measures by the United States government.”

A Venezuelan voter searches for his name on the voter list at the Liceo Pedro Emilio Coll in the Coche Parish in Caracas, Venezuela during elections on November 21, 2021.José Luis Granados Ceja

These elections saw races for 3,082 public offices, including 23 state governors, 335 local mayors, 253 regional legislators and 2,471 local councilors, and were accompanied by more than 300 international visitors invited by the National Electoral Council and political parties in Venezuela, as well as delegations from the European Union, the Carter Center and the Latin American Council of Electoral Experts (CEELA).

Martin Sereno, a regional lawmaker from the province of Misiones, Argentina,who accompanied the electoral process told Truthout that the vote was well organized, peaceful and marked by a festive atmosphere. “We also saw many adults and seniors that came to vote, and that speaks to the enthusiasm of the people to be able to elect their representatives and authorities,” said Sereno.

Nicanor Moscoso, head of the CEELA delegation, praised the organization of the election and said in a press conference that the process met international standards.

Venezuela has a rigorous system to prevent fraud, with voters having to present their identification, have their fingerprints scanned, and both sign and leave a thumbprint on a paper record. The South American country is one of few in the world that has an entirely electronic voting system which automatically produces a paper record that is then deposited into a ballot box in case of an audit. Political parties are also invited to have a representative at every polling location to supervise the process and the count.

Cybel González, one of the citizens tasked by the electoral authority with supervising a voter center in the municipality of Carrizal in the state of Miranda, told Truthout that in her center the process had taken place without incident with representatives from four political organizations present to scrutinize the vote.

Carlos Ruiz Patiño, a voter in the city of Los Teques, just outside the capital of Caracas, said he found the organization of the election to have been excellent, despite the additional safety protocols implemented in light of the pandemic.“Going out to vote is the most important thing,” said Ruiz.

The End of Violence in Venezuelan Politics?

With a history of sabotage by political forces interested in disrupting elections and rumors of potential violence, Venezuela mobilized a significant number of state security forces to provide security at the voting centers.

Venezuelan Defense Minister Vladimir Padrino López, visiting one of the polling locations in the Coche Parish in Caracas, told Truthout that there had been no significant incidents in the country. “The people are the ones who will be the protagonists on this day, and they are doing it. The people of Venezuela have always demonstrated their civic duty,” said Padrino.

Certain elements of the political opposition, particularly those close to self-declared “interim” President Juan Guaidó and his Popular Will party, have in the recent past staged months-long violent street protests known as guarimbas. Guaidóhimself, along with his mentor, former Chacao Municipality Mayor Leopoldo López, unsuccessfully tried to stage a military coup.

The insurrectionary strategy proved unsuccessful, being largely rejected by the Venezuelan people, leading Guaidó to tepidly endorse a return to an electoral strategy, with other hardline parties more emphatically calling for an end to violent tactics.

“The people of Venezuela have said ‘no’ to that violence and have come out in massive numbers to vote,” said Padrino. “They have said ‘no’ to interventionism, ‘no’ to political violence, ‘yes’ to democracy, ‘yes’ to harmony, ‘yes’ to coexistence, and this is another example of what the Venezuelan people want.”

A sizeable portion of the opposition had, until recently, opted for the insurrectionary strategy and called on their supporters to boycott the election over the past three electoral cycles, which played a role in a drop in voter turnout.

As a result, with the return of nearly all of the political parties, much attention was paid to the voter turnout in these elections. The National Electoral Council reported a turnout of nearly 42 percent, a figure in line with turnout in previous regional elections in Venezuela and notably, higher than the turnout in presidential elections in neighboring Chile, which also held its vote on Sunday.

The participation by nearly 100 EU observers is widely considered a first step for the lifting EU sanctions, which together with U.S. sanctions, have significantly contributed to rising poverty and hunger in the country as the government struggles to sell oil, Venezuela’s single most important export commodity.

Nonetheless, ahead of the vote there was significant tension between Venezuelan politicians and Josep Borrell, the high representative of the Union for Foreign Affairs and Security Policy, with President Maduro and even representatives of the moderate opposition Democratic Alliance emphasizing that Venezuelan elections are sovereign processes, and that their legitimacy would not derive from the EU or its mission.

Those tensions largely dissipated during Sunday’s vote with the head of the EU mission, Isabel Santos, saying the vote was proceeding “calmly” and Maduro noting that the mission had respected the Venezuelan constitution. The EU is expected to release its full report this week.

U.S. Secretary of State Antony Blinken condemned the vote, saying that the Venezuelan government “deprived Venezuelans yet again of their right to participate in a free and fair electoral process” but did not point to any flaws in the voting process. Instead, he alleged the government “grossly skewed the process.”

Blinken also reaffirmed U.S. support for Popular Will opposition leader Guaidó’s claim to the presidency and gave no indication there would be any easing of sanctions. The statement also pinned the blame for the lack of opposition unity on Maduro. The Venezuelan opposition is notorious for its infighting, a fact made evident by an incident just days before the vote with an opposition activist assaulting a rival candidate in the state of Bolívar.

The disappointing result for the opposition and the U.S.’s affirmation of support for Guaidó’s claim despite a lack of support inside Venezuela paints a grim picture for the opposition’s future. With part of the opposition betting on participating in elections and the Guaidó camp clinging to its claim to the presidency despite not exercising any real power, the opposition continues to send contradictory messages to its supporters.

Meanwhile, the United Socialist Party of Venezuela has emerged from this contest all the more stronger.