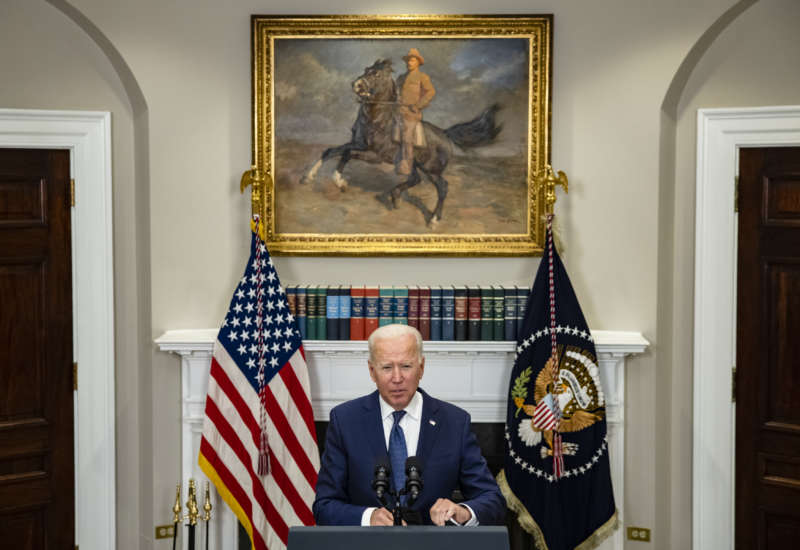 Given the brutish approach of his predecessor, many expected President Joe Biden to shift away from the worst practices in U.S. foreign policy and at the border in the previous four years. Indeed, in the first weeks of his presidency, the Biden administration signaled changes. In Secretary of State Antony Blinken’s first press briefing, the State Department announced that it was reviewing weapons sales to Saudi Arabia and the United Arab Emirates (UAE) — which have led the catastrophic war on Yemen with essential U.S. partnership.

A week later, Biden declared in his first foreign policy address as president that “We are ending all American support for offensive operations in the war in Yemen, including relevant arms sales.”

Regarding its practices at the border, Biden administration officials promised a shift away from Trump’s practices of separating families and caging children, calling them a “moral failing.” He said that the new White House would “deal with immigration comprehensively, fairly, and humanely.”

As 2021 comes to a close, however, we are seeing the latter part of a trajectory that settles into familiar, disastrous militarism.

These arrangements come as Saudi Arabia is escalating its devastating bombing in Yemen. In November, Saudi forces carried out the largest number of air strikes since Trump’s last year in office.

These bookends — Biden’s early announcement of an end to U.S. support for the war in Yemen and his subsequent robust material support of that war — capture the set of practices that the Biden White House is settling into, not only in Yemen, but also in the realm of war and imperialism more broadly.

Consider the White House’s approval of a $23 billion weapons sale to the U.A.E., which provides the Emirates with attack drones and F-35 fighter jets. The arrangement was negotiated under the Trump administration as the prize for the U.A.E.’s role in leading the normalization of diplomatic relations between Israel and itself, Bahrain, Morocco and Sudan, despite Israel’s deepening violence against Palestinians.

In November, Saudi forces carried out the largest number of air strikes since Trump’s last year in office.

The Biden administration embraced the normalization agreements, along with Trump’s other actions meant to consolidate U.S. support and extend legitimacy to Israel in a time when Palestinian protest presents a steady challenge to Israeli apartheid, and global Palestine solidarity campaigns have gained more traction than ever.

Trump fulfilled longstanding wishes of the Israeli right wing, including moving the U.S. embassy to Jerusalem from Tel Aviv, declaring the legality of Israeli settlements in the occupied Palestinian West Bank — which are considered unambiguously illegal according to international law — and endorsing the Israeli occupation of the Syrian Golan Heights. The crudeness with which Trump performed these acts — framing them nakedly as pandering to right-wing evangelical Christian voters, and declaring himself the “King of Israel” — may contrast with Biden’s rhetoric. Yet when it comes to concrete action, Biden has accepted and continued along his predecessor’s path.

This continuity is also painfully evident regarding Biden’s actions toward migrants — many of whom have been displaced due to U.S. imperialist policies. For example, in the face of severe social, political and economic crises in Central America — which are driven by decades of Washington-directed economic policies and brutal repression carried out by U.S.-armed regimes in Honduras, Guatemala and El Salvador — Kamala Harris, in Guatemala City on her first overseas tour as vice president, presented the U.S.’s policy in succinct cruelty: “Do not come.”

Once they approach or enter the country, migrants face a complex of forces that remains in place to detain, incarcerate, and deport migrants and prevent their entry into the United States.

Biden has maintained the use of Title 42 — a statute that allows the federal government special powers in public health emergencies — to deny migrants, including asylum seekers, access at the U.S.-Mexico border, in violation of international law. Biden is thus continuing Trump’s use of the measure, which was invoked when the COVID-19 pandemic began. Public health professionals and scholars have argued that the measure cannot be justified in the name of public health and have called upon the administration to end it.

Biden has also reopened some of the most notorious detention sites highlighted in the Trump era, including Florida’s Homestead Shelter for Unaccompanied Children. The numbers of people in detention by Immigration and Customs Enforcement (ICE) have swelled to 22,000 under Biden — marking a 56 percent increase since the day the new president took office.

Biden’s most dramatic and revealing act at the border this year was his handling of the arrival of thousands of primarily Haitian asylum seekers at Del Rio, Texas, in September. From Border Patrol agents on horseback whipping the Black migrants, to their confinement in squalid conditions on riverbanks and under a bridge, the U.S. government and its police forces engaged in racist violence, treating the Haitians as a criminal threat to be contained, rather than vulnerable people with the right to seek refuge and asylum. Biden deported the group of thousands to Haiti in an operation that revealed the logistical capacity at his disposal — which could, of course, instead be used to welcome people and support their survival.

Finally, the Biden administration has resumed Trump’s infamous “Remain in Mexico” policy, which forces people seeking asylum at the U.S.-Mexico Border to apply in Mexico and wait there while their applications are processed. The policy goes against U.S. law, which guarantees people the right to apply for asylum inside the U.S. — regardless of how they entered. Biden initially opposed the program, suspending it in February. In the face of rulings by the Fifth Circuit Court of Appeals and the Supreme Court, however, the White House negotiated a new version of the policy with the Mexican government, and has begun to administer it. The program — which made tens of thousands of asylum seekers vulnerable to kidnapping, assault and other hazards in Mexico under Trump — is now Biden’s.

Biden did follow through on his promise to withdraw U.S. troops from Afghanistan. But even that long overdue and necessary move for a war that was unjust from its first day was done with such careless disregard for the lives of Afghans that it sparked a new and escalating humanitarian crisis. U.S. forces even killed several Afghans — including seven children in a single family — in the chaotic withdrawal of ground troops. While State Department officials failed Afghans made suddenly vulnerable by the haphazard withdrawal — with no plan to evacuate the many who sought exit — the Pentagon secured its ability to continue carrying out air missions in Afghanistan through its bases in the region and by positioning an aircraft carrier in the Arabian Sea weeks in advance.

At the moment, Afghanistan faces mass hunger and an economic catastrophe as billions of dollars belonging to the Afghan Central Bank sit in the United States, frozen by order of the Biden administration.

Yet, amid these blatant continuations of state violence, grassroots pressure has clearly made an impact on U.S. policy.

Biden’s rhetorical vows to end U.S. involvement in the war in Yemen, for example, empty as they were, were responses in significant part to a years-long, consistent and vocal challenge of U.S. support for the war. This has been led by Yemeni activists in the U.S., journalists, and UN and other aid workers in Yemen calling attention to the catastrophic humanitarian crisis there and the U.S.’s central role. Activism has continued with Biden in the White House, including a hunger strike earlier this year led by activists in the Yemeni Liberation Movement.

Mass mobilization is necessary to stop the violence that the U.S. carries out and supports around the world and at its borders.

Similarly, 2021 saw an increasingly critical and widespread challenge to U.S. support for Israel, especially during its horrific attack on Gaza and repression of Palestinians in Jerusalem during Ramadan this May. The ice cream company Ben and Jerry’s could no longer reconcile its progressive brand with doing business in Israel’s illegal settlements in the occupied territories, and announced the end of its operations there. And though it ultimately passed, congressional approval for an additional $1 billion to Israel to replenish its missiles after the attack was more controversial and faced more direct opposition than any funding proposal for Israel in U.S. history.

These formidable challenges to U.S. support for Israeli apartheid stemmed from many years of Palestine-solidarity organizing, as well as a more widespread anti-racist consciousness in the U.S. driven by years of Black-led resistance to police violence and other forms of racism.

On the subject of popular resistance, it is important to remember that the greatest moments of setback for Trump’s anti-immigrant agenda came when people mobilized en masse. This happened in response to the anti-Muslim travel ban, when thousands took to airports to express solidarity with those targeted — and then again in rallies across the country in response to the separation of families and cruel detention of children at the border. These moments of protest disrupted those policies, albeit temporarily.

As we enter a new year, we are challenged to build movements with capacity expansive enough to build and sustain solidarity with those targeted and displaced by U.S. policies. Mass mobilization is necessary to stop the violence that the U.S. carries out and supports around the world and at its borders.