Labor Board: Starbucks Must Reinstate 7 Workers the Company Fired in Memphis 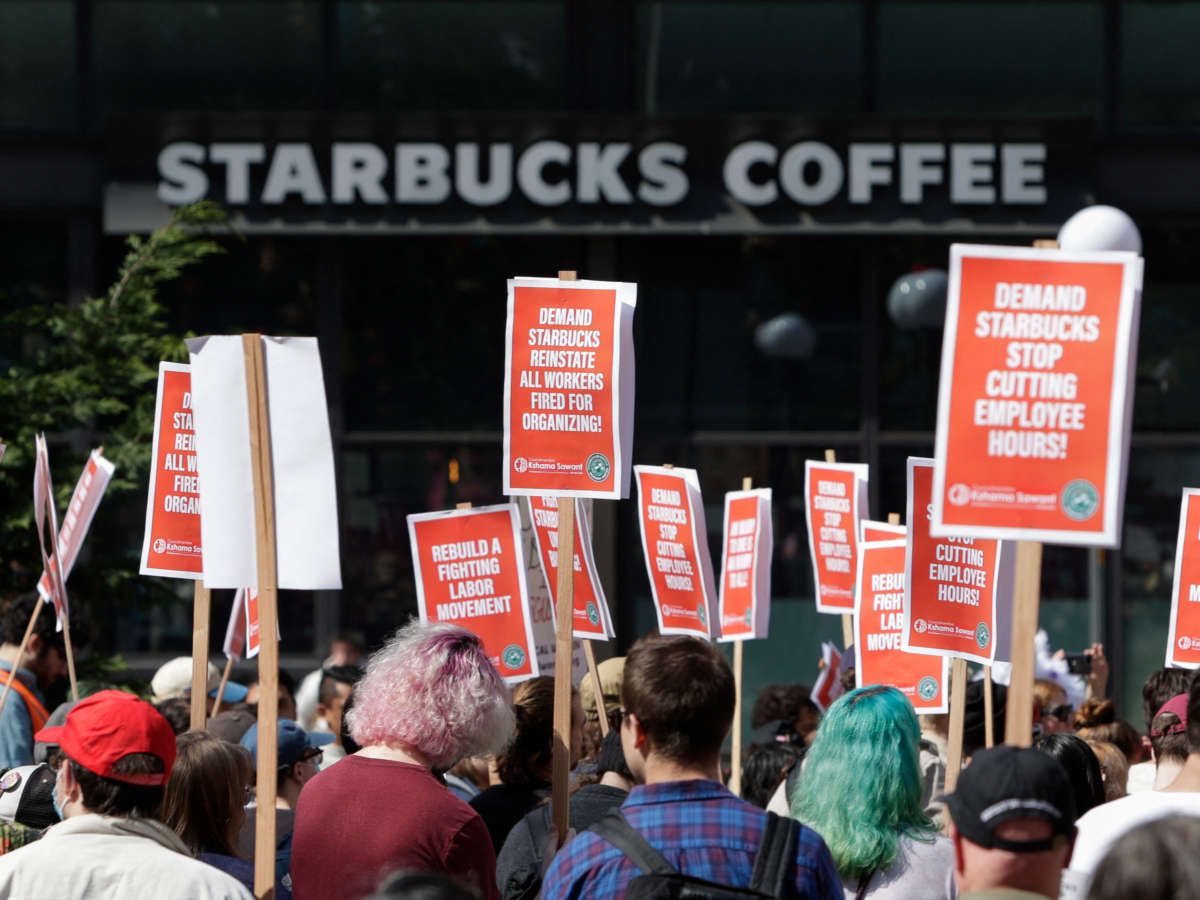 In a potential major win for unionizing workers, Starbucks may soon face legal consequences for the high-profile termination of seven employees in Memphis, Tennessee, who were in the midst of unionizing their store.

On Tuesday, the National Labor Relations Board (NLRB) filed an injunction in federal court against the company arguing that it must face consequences for firing the employees, dubbed the Memphis Seven by the union, in retaliation for their union activity. Five of the terminated workers made up nearly the entirety of the organizing committee at the store.

The petition, filed by the NLRB’s New Orleans Regional Director Kathleen McKinney, says that prior to being fired, the workers faced a variety of unlawful anti-union actions from the company, including coercion, surveillance and unequal treatment of known pro-union employees. The company had disciplined the employee who first started the union campaign at the store and took steps to prevent customers from voicing their support for the union campaign.

McKinney asked the court to order Starbucks to reinstate the workers and immediately cease other unfair labor practices that it’s carrying out in the store.

“Given Starbucks’ egregious conduct interfering with the federally protected rights of its employees, we are asking the Court to swiftly grant the injunction,” McKinney said. “Without immediate interim relief from this Court, Starbucks could irreparably harm the campaign in Memphis, and send a chilling message to its employees across the country that they too will suffer the same fate as the terminated Memphis employees if they dare to exercise their right to engage in protected activities.”

The Memphis Seven were among the first employees that the company fired in its union busting drive. At the time, in February, the union called the move the “most blatant act of union-busting yet,” and said that the company was frivolously citing supposed internal policies in their reasons for firing the employees. Since then, the company has fired many more pro-union employees.

It is illegal for employers to retaliate against employees for organizing a union, which the NLRB has found that Starbucks has done dozens of times in its anti-union campaign that spans across the country. Starbucks has denied the labor board’s allegations that the firings crossed legal boundaries.

This is the second injunction that the labor board has filed against Starbucks. Last month, the NLRB petitioned to have three fired pro-union workers in Phoenix, Arizona, to be reinstated and their internal records expunged. If the judge grants that injunction, the company will also have to have a high-level executive read the court order in front of employees with a member of the labor board present, or have a labor board official read it before employees in the presence of a company executive.

On the same day that the latest injunction was filed, 14 Senate Democrats and progressives sent a letter to CEO Howard Schultz asking him to immediately cease union-busting efforts and voluntarily recognize stores that have filed for union elections. So far, workers have filed over 250 union petitions to join Starbucks Workers United, which has successfully unionized over 60 stores so far.

The lawmakers, led by Sen. Cory Booker (D-New Jersey), asked Schultz to begin pursuing a nationwide plan to allow Starbucks workers to seek union representation. “[W]e are deeply troubled by reports that, on the heels of the stock buyback announcement, Starbucks has taken steps to undermine nation-wide, worker-led union campaigns,” the letter reads. The letter was signed by Senators Bernie Sanders (I-Vermont) and Elizabeth Warren (D-Massachusetts), among others.

“[B]y offering to increase benefits for your workers, Starbucks is doing what the union campaigns have said all along: Starbucks can and should provide better working conditions and benefits for its workers,” the letter writers continue, referring to a recent announcement that the company is only raising wages for stores that aren’t unionizing or already unionized. “It is unfortunate that Starbucks has chosen to do this now seemingly to interfere with the union campaigns, since such action would constitute impermissible interference in a union organizing drive.”