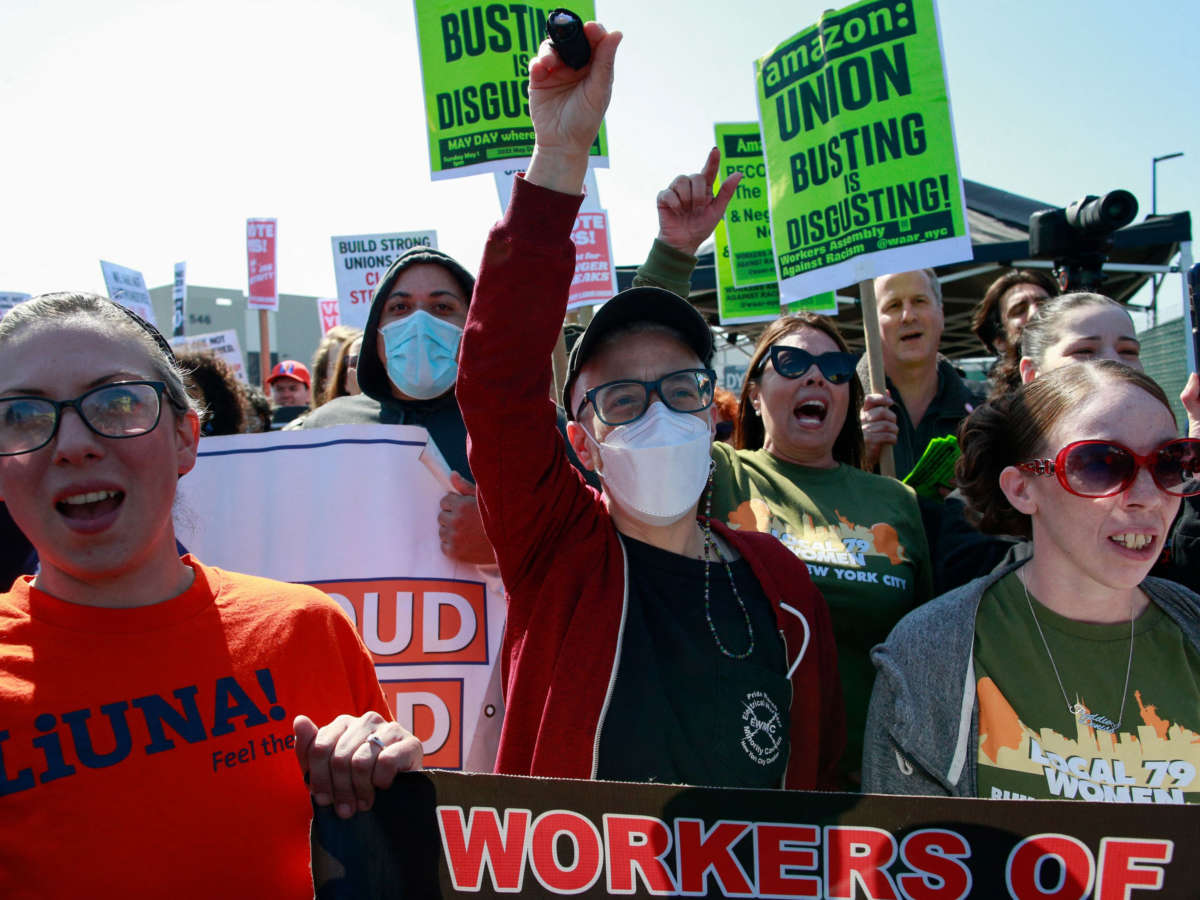 Labor officials have found merit in claims that Amazon illegally threatened workers during a warehouse’s union drive in Staten Island, New York, confirming allegations that the company made threats to withhold benefits from union workers during captive audience meetings.

As first reported by Bloomberg, National Labor Relations Board (NLRB) officials informed Amazon Labor Union (ALU) of its findings after the union brought a slew of illegal union-busting claims to labor officials. The NLRB is prepared to issue a formal complaint about the alleged violations unless the company settles, a spokesperson said on Thursday. Complaints from labor prosecutors are submitted to agency judges.

The agency’s Brooklyn-based regional director found that Amazon had illegally threatened to withhold benefits and cut workers’ wages to the local minimum wage during mandatory anti-union meetings prior to the vote at the company’s JFK8 warehouse, which voted to form the company’s first-ever union last month.

Labor officials also found that the company implied that workers’ grievances with their working conditions could be resolved if they voted against unionizing, according to labor reporter Steven Greenhouse.

Amazon told workers that it may take years for the company to agree to a contract with unionized workers — or that they may never get a contract at all, despite the company’s federal mandate to bargain for a contract with workers. Although contract negotiations are currently underway, the company additionally threatened that workers would not see improvements to their working conditions, the NLRB spokesperson said.

It is illegal for companies to threaten to withhold benefits or wage raises from workers if they vote for a union. The company, which has filed to challenge New York workers’ union victory, has denied wrongdoing.

Earlier this month, the NLRB found that the captive audience meetings held by the company during the JFK8 union drive were illegal, and officials said they’d issue a complaint if the company doesn’t agree to a settlement. Meanwhile, NLRB General Counsel Jennifer Abruzzo has been leading the agency in a recent push to declare all mandatory anti-union meetings “inherently” illegal.

These findings are just the latest in a pile of allegations from the labor board that Amazon has engaged in illegal conduct throughout recent union drives. In January, the labor board filed a complaint against the company, accusing Amazon of illegally surveilling and threatening workers during the JFK8 drive.

“We just hope that Amazon is held accountable,” Amazon Labor Union president Christian Smalls said at the time. “We hope that other union-busters as well learn their lesson and that workers are encouraged to speak up.”

Amazon has faced increased scrutiny from politicians over its union-busting moves in recent weeks. Recently, President Joe Biden and Labor Secretary Marty Walsh met with Smalls and union organizers from Starbucks in support of their efforts in the face of aggressive anti-union campaigns. “Chris Smalls is making good trouble and helping inspire a new movement of labor organizing across the country,” the president wrote on Twitter after the meeting.