In the Face of Israel’s Violence, Being a Good Parent Means Fighting Colonialism 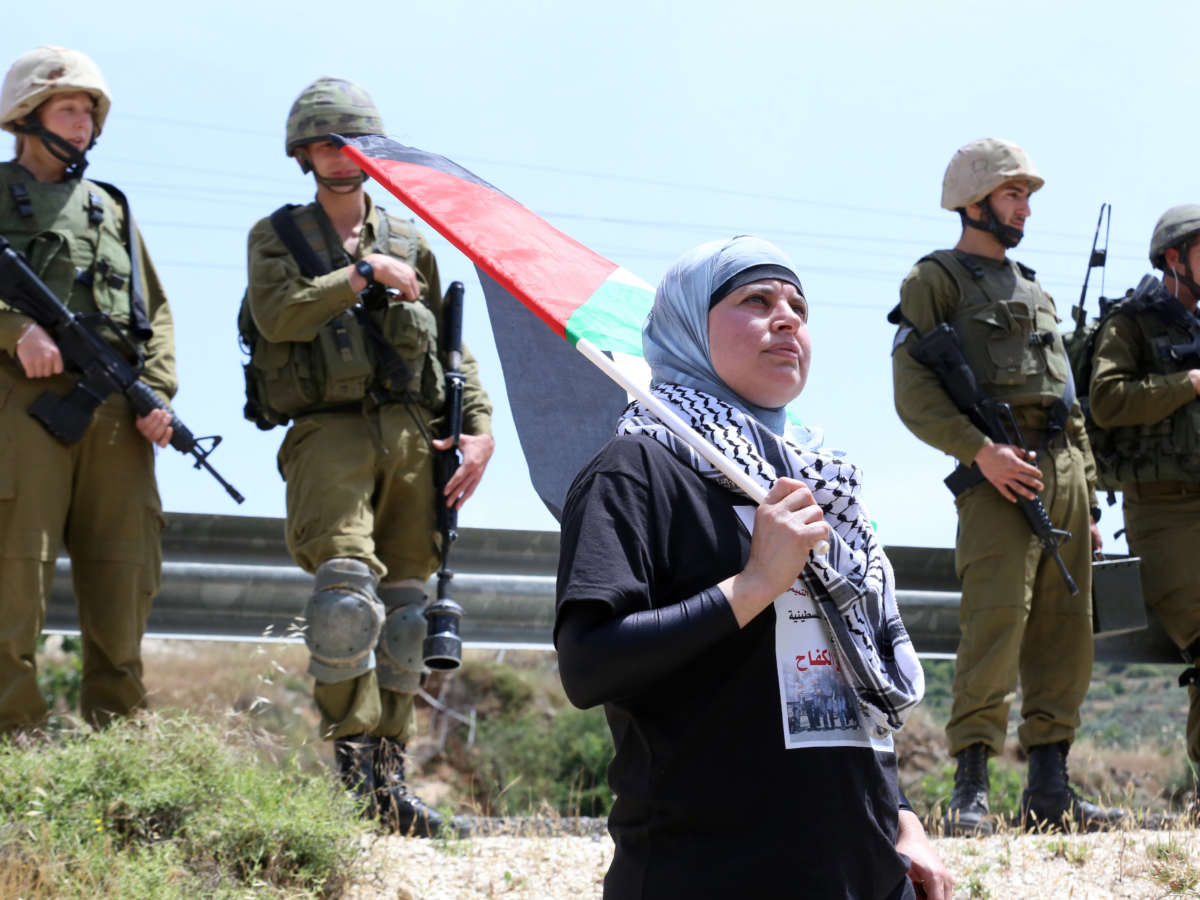 What does it mean to be a parent in the face of colonial violence? Parents all over the world are united in their tireless efforts to protect their children from harm and surround them with the conditions they need to thrive. But parents who live in a society structured by settler-colonialism are repeatedly robbed of their capacity to protect their children.

Amid Israeli brutality, land grabbing, detention, torture and the dehumanization of Palestinians, parents (mothers especially) are forced to conceive of the work of parenting as indistinguishable from a broader struggle to defend Palestinian lands, families and communities. Through grassroots collective initiatives like labor strikes and boycotts of Israeli goods, to mobilization of the masses in the streets, to the podium in leadership positions — as scholars and activists in the classrooms, and as protectors and anchors in their homes — mothers creatively and radically organize around the barriers of the colonialist, racist and sexist Zionist project.

As a mother and human rights defender in the occupied West Bank, I (Manal Tamimi, one of the coauthors of this article) have been arrested three times by Israeli soldiers. The first arrest occurred in January 2010 when I was protesting in my village. The next occurred in December 2017 in front of Ofer Prison in the West Bank as I protested for the freedom of my niece Ahed Tamimi. The third arrest occurred on International Women’s Day in 2016, when Israeli soldiers raided my home at 3 a.m., accusing me of incitement on social media. And in April 2015 I barely survived an assassination attempt by an Israeli sniper. I had received a threatening message on Twitter that day saying my blood would be spilled in the streets. Then, as I participated in a protest in my village, an Israeli sniper shot at me and hit me in the leg.

But the horror I experienced in those moments pales in comparison to the time when my mother and I watched my son shackled in an Israeli military court — part of the two-tier legal system of apartheid Palestinians face. Broken and bruised after 25 days of interrogation and torture, my traumatized son could not even recognize his own grandmother. He told us that the torture tactics committed by the Israeli Security Agency had involved its officers threatening to rape his mother (me) if he didn’t provide the statement that Israeli authorities were looking for. In the short period of time it took us to compose this piece, my son, Osama, and my nephew, Waleed, were viciously attacked by Israeli occupying forces with live ammunition that pierced their legs and arms.

In their brief time on this Earth, the glow of youth has abandoned Osama, Waleed, and many other Palestinian youth who have witnessed and survived the merciless edge of Israel’s state violence. This violence works through Israel’s laws and maintains structural racism via the militarized colonization of Palestinian land and the Palestinian people. The “legality” of it all is rarely challenged by Western governments, but frequently abetted by them.

With no external protection for their children — certainly not from President Joe Biden — and no accountability for the crimes Israel commits, Palestinian mothers have had to devise programs that no parent should ever contemplate. They began organizing workshops facilitated by former political prisoners, lawyers and psychologists and aimed at teaching children as young as 10 years old how to survive the many types of psychological abuse and physical violence utilized by the occupying forces during arrest, interrogation and detention.

The workshops were created as an initiative led by Nabi Saleh families starting in 2013 after the Israeli army began to intentionally and aggressively arrest children in Nabi Saleh as a form of collective punishment and as a way to incriminate adults by pressuring and instilling fear in minors to provide statements.

The workshops are akin to “the talk” that Black parents in the United States are forced to have with their children regarding how to interact with racially charged law enforcement that systematically, intentionally and violently targets them.

Exposure to state-sponsored Israeli violence results in profound psychological distress. Palestinian children and their parents are traumatized by the severe losses and disruptions in their lives. They often suffer from post-traumatic stress disorder symptoms. To ease the psychological suffering of their children, parents in Tamimi’s village, Nabi Saleh, also collaborated with trauma counselors from The Palestine Institute at An-Najah University and the Treatment and Rehabilitation Center for Victims of Torture. The trauma counselors have sought to help children struggling with high forms of stress and anxiety process their experiences and provide them with stress managing strategies to cope with the violence perpetrated against them and their families.

With the prevalence of video technology, parents’ efforts to help their children survive settler-colonialism includes training Palestinian children on how to use their cellphone cameras to document the egregious acts committed by the racist state and its apartheid policies in the occupied West Bank. My (Manal Tamimi’s) niece, Janna Jihad, the inimitable teenage Palestinian journalist, uses her phone as a tool to broadcast the Israeli army’s oppressive and often deadly treatment of Palestinians.

Similarly, viral phone videos are used to film U.S. police brutality against Black people: Two years ago, teenager Darnella Frazier captured the final, agonizing moments of George Floyd’s life. Without the bravery of children like Jenna and Darnella who secure the footage in risky situations, people around the globe would have a narrower view of how a militarized occupation has devastated the lives of millions of Palestinians, and disrupts every aspect of daily life for people of color in the U.S. Without video, these cases would simply disappear or never register properly in the first place.

While some tenets of parenting are universal, the tragic reality is that there’s an additional layer for Palestinian parents and parents of color living in the U.S. who are actively dismantling the systems of white supremacy and colonization.

While Palestinians have always tended to their crops, and cultivated their orange groves and olive trees, Palestinian mothers accelerated their home gardening during the first intifada as a means to boycott Israeli products, resist occupation and raise awareness of Israel’s oppressive actions. In the city of Beit Sahour, Palestinian families refused to pay taxes to Israel in order to slow the economy fueling the annexation of their land. When education itself became criminalized during the first intifada, and Israeli officials closed schools and universities indefinitely, parents carved out innovative paths by developing underground education programs, a mind-saving movement.

Despite the shootings and brutal beatings that were encouraged by then-Israeli Defense Minister Yitzhak Rabin, who ordered Israeli forces to “break the bones” of Palestinian protesters, mothers were also massively represented in the streets directly confronting belligerent Israeli soldiers.

Moreover, we would be remiss not to recognize the mothers in Gaza, one of the most difficult places on Earth to mother and be mothered. For the past 15 years, they have been held captive by a devastating land siege and naval blockade which leaves mothers with insufficient resources to meet the basic needs of their loved ones — food insecurity, clean water and limited access to health care and medical supplies. Yet, in the face of this deadly blockade and heavy-handed military operations, we witness mothers and community caretakers like Rouzan al-Najjar, the paramedic, who was deliberately shot at and killed while providing life-saving emergency medical assistance during the Great March of Return in 2018. We took notice of Al-Najjar’s mother who amid her grief donned a medic’s vest and joined the protests to complete her daughter’s mission of attending to the injured.

These indispensable and essential acts of mothering carry immense power and form effective political strategies for resisting settler-colonial occupation. They build on a proud history of putting economic and international pressure on Israel to negotiate and recognize freedom and equal rights for Palestinians.

Palestinian mothers continue on the front lines despite the failures of the Oslo Accords. These negotiation efforts were largely determined by Israel’s political ambitions of complete and total domination rather than freedom for Palestinians. In those negotiations, for all their shortcomings, Palestinians refused to relinquish their right of return or rights to self-determination and independence.

Today, Israel insists on advancing its political ambitions by escalating its repression and assault on parenting with an aggressive removal campaign in East Jerusalem neighborhoods like Sheikh Jarrah. While raising their children in the most oppressive conditions, parents confront the expansionist project and displacement of their families in the courts and on the streets. Their deliberate actions are a symbol of our people’s insistence on complete liberation, and 74 years later, they continue to resist settler-colonialism in both visible and invisible ways — they resist as matriarchs, community organizers, scholars, artists, writers, and more.

Consequently, when we talk about justice for Palestine we must reinforce and uphold that the liberation of Palestine is a feminist and reproductive justice issue by acknowledging Israel’s assault on Palestinian women and children. Despite the devastating toll occupation has on the physical and emotional health of parents, they continue to engage in the struggle for the right of return, self-determination and an end to apartheid Israel’s occupation and colonization of Palestine. This cannot be accomplished without the political interventions, sacrifices, wisdom and leadership of Palestinian mothers.

The assault on Palestinians and their ancestral lands with U.S. weaponry continues unabated. It is inconceivable that members of Congress like Jan Schakowsky refuse to do the bare minimum and sign the Palestinian Children and Families Act (House Resolution 2590). With the stroke of a pen, U.S. lawmakers can fundamentally change this country’s relationship to the apartheid state. If passed, this life-affirming bill could protect and save the lives of children like Ahmad Manasra, who remains captive in solitary confinement despite his deteriorating mental health condition, his symptoms likely exacerbated by the abuse perpetrated against him by Israeli prison authorities.

Palestinians’ lives are being stolen and kidnapped. They are under constant threat of being expelled from their homes and lands in areas like Masafer Yatta and Sheikh Jarrah, and journalists such as Shireen Abu Akleh are deliberately targeted for exposing the atrocities committed by the racist state. The U.S. government is complicit by not standing up to these abuses even when U.S. citizens are fatally killed by Israeli forces — as was also the case this year with Palestinian American grandfather Omar Assad.

Despite the spectacle of inhumanity, Palestinians refuse to submit to Israel’s escalation in violence. They will not sit idly by as U.S. lawmakers debate — or ignore — the merits of HR 2590. Instead, they respond to Zionism and apartheid with popular resistance.

Living under Israeli colonization and in the face of enormous human rights violations necessitates resistance and direct-action campaigns by exiles, refugees and those living under Israeli occupation. Palestinian parents, particularly mothers, are rising to this challenge. President Joe Biden’s recent trip to the region, however, makes clear that not only will his administration not help such efforts, it will directly stand in the way of Palestinian liberation. In this, Biden and his predecessor are united. The disastrous consequences will be borne by Palestinian young people and the parents who seek both to protect them and to advance their liberation.