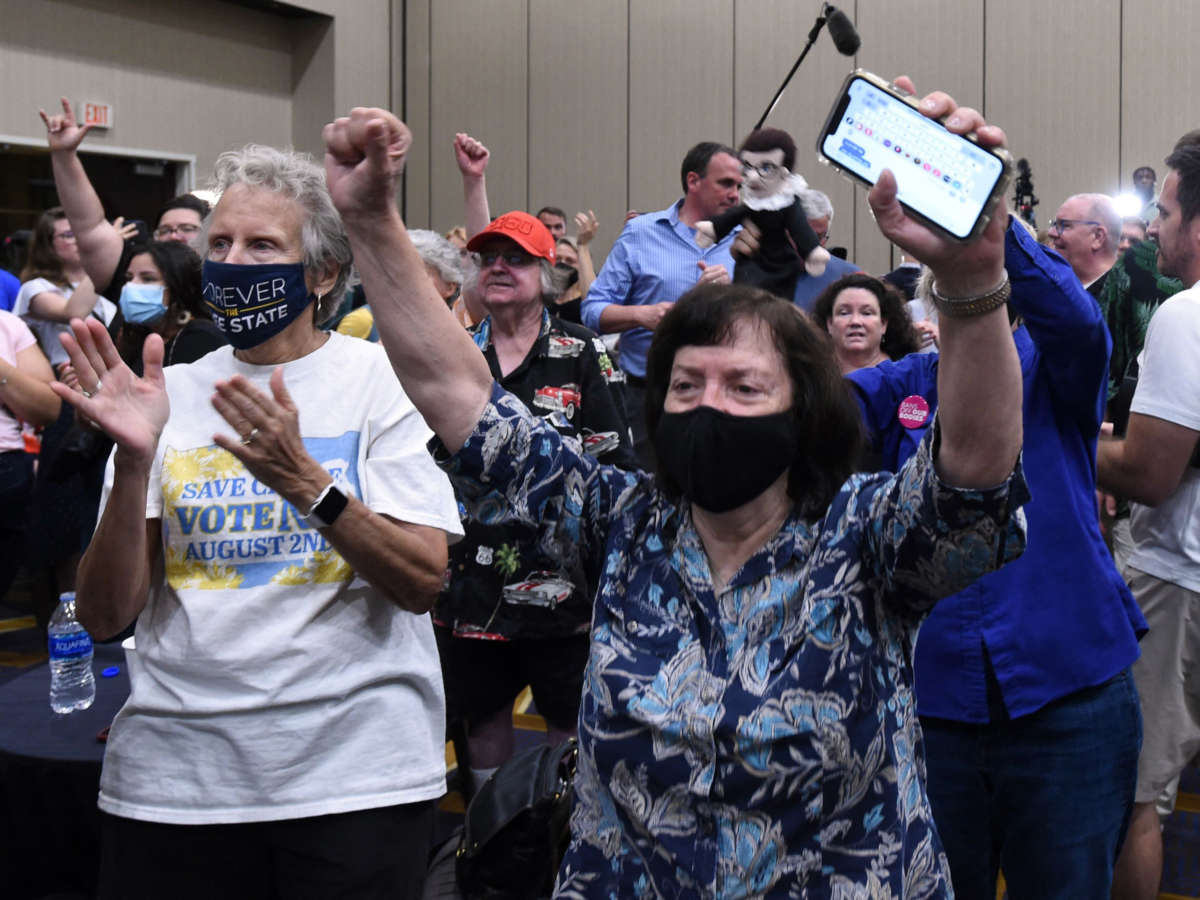 On Tuesday, Kansas residents overwhelmingly voted against an amendment to their state constitution that likely would have paved the way for the state’s majority-Republican legislature to implement an abortion ban in the near future.

In 2019, the Kansas Supreme Court recognized abortion rights as being protected in the state’s highest governing document, essentially keeping the procedure legal in the state, even after other states’ conservative lawmakers began banning abortions when the federal Supreme Court overturned protections from the 1973 decision Roe v. Wade earlier this summer. Had the amendment passed on Tuesday, it would have changed the state constitution to supersede the state Supreme Court’s ruling from three years ago and open the door to dangerous abortion bans in the state.

As of 9 am Eastern Time on Wednesday, with 95 percent of the vote tabulated, 58.8 percent of Kansans voted “no” on the amendment to keep abortion protections recognized by the state’s highest court in place. Only 41.2 percent voted “yes.” More than 900,000 individuals took part in casting a ballot on the question, coming close to numbers seen in past general election contests – meaning that turnout for the ballot measure was abnormally high for a non-general election.

Beyond being a decisive outcome, the vote also transcended what political commentators say is the typical urban-rural divide seen in U.S. politics, with several rural counties in the state voting against the amendment as well. The outcome suggests that, as polls have also found, restrictive abortion bans are unpopular among voters across the political spectrum.

This is truly a historic day for Kansas and for America. Freedom has prevailed. The constitutional rights of Kansas women have been protected. Thank you to everyone who took part in this movement. pic.twitter.com/9ZVI2rF0Fh

The vote was the first statewide ballot on the issue of abortion since Roe was overturned in June. More than $12 million were spent by both sides in the race.

Supporters of abortion rights in the state, which typically trends more conservative in its elections than the rest of the country, praised the outcome of the vote.

“It’s sort of unbelievable,” said Iman Alsaden, chief medical officer at Planned Parenthood Great Plains. “I’m so proud to be able to go to work tomorrow and talk to my staff and give everyone a hug.”

“The deck was stacked against us from the beginning,” said Rachel Sweet, campaign manager with Kansans for Constitutional Freedom, the organization that spearheaded support for the “no” vote. “But we didn’t despair. We put in the work, and the numbers speak for themselves.”

Several factors were indeed working against organizers hoping to protect abortion freedoms. The wording of the ballot itself was purposefully problematic and confusing, including telling voters that a “yes” vote would ban “government funding of abortion” – a rule that’s already being implemented in the state and that wouldn’t be changed by supporting a “no” vote.

Abortion advocates also criticized the timing of the ballot initiative. Rather than holding the referendum during the general election in November, the vote took place during the partisan primary election this week. There wasn’t a contested election for governor on the Democratic Party’s ballot, but there were several contested elections (including for that office) on the GOP side, which meant more Republican-leaning and assumed anti-abortion voters were expected to take part.

Those working for the Value Them Both campaign, an anti-abortion organization that campaigned to get the amendment passed, attempted to blame the outcome on other factors beyond Kansas residents being supportive of abortion rights. The group misleadingly said that its electoral loss was due to “an onslaught of misinformation from radical left organizations” that were aided by the “mainstream media.”

However, it was Value Them Both that was deceitful during the campaign. The organization claimed on its website, for example, that the 2019 ruling from the state Supreme Court “removed the legal foundation for all existing laws that permit basic regulations on abortion,” and that the amendment would “simply allows for these existing laws to be protected.” But the organization wasn’t fighting for “basic regulations” – it was actively telling its allies that it would be pressing for a bill to ban virtually all abortions in the state after the amendment got passed.

Though basic human rights, including reproductive rights, should not be subject to a vote, polling on the issue of abortion shows that it is supported across the entirety of the country. A Pew Research Center poll published in June, for instance, showed that 61 percent of Americans supported keeping abortion legal in all or most cases, while only 37 percent said it should be illegal in most or all cases.