Schumer: Inflation Reduction Act Has Votes to Pass After Concessions to Sinema 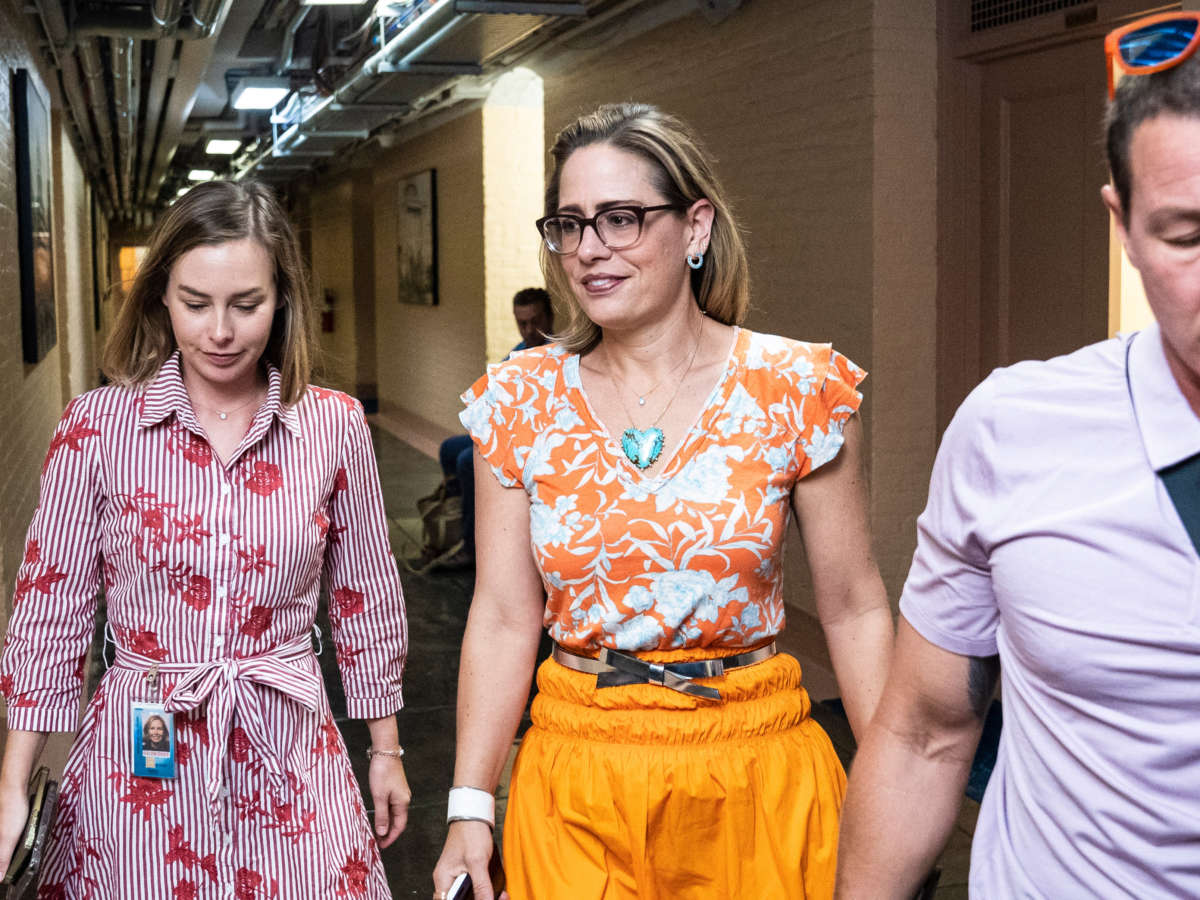 Conservative Democrat Sen. Kyrsten Sinema (Arizona) announced on Thursday that she will support the Inflation Reduction Act (IRA) after Democratic leaders agreed to take out proposals to raise taxes on businesses and the wealthy in order to fund the bill.

Sinema said in a statement that, after the Senate parliamentarian reviews the budget package, she will “move forward” with the bill. With Sinema’s support, Senate Majority Leader Chuck Schumer (D-New York) says that the Senate now has all 50 Democrats on board to pass the bill via a simple majority vote, with Vice President Kamala Harris’s vote being the 51st.

Sinema’s opposition was likely the last roadblock Democrats needed to clear after they announced the bill last week following negotiations with conservative Sen. Joe Manchin (D-West Virginia). Among the many large concessions made to appease Manchin are fossil fuel industry giveaways and the exclusion of a host of proposals to support middle- and lower-income Americans. In order to get Sinema’s support, Democrats also had to nix plans to close a tax loophole that allows the wealthy to dodge millions of dollars in taxes.

The carried interest loophole, which allows private equity investors and hedge fund managers to pay a lower tax rate on their incomes due to lower taxes on capital gains, was slated to raise $14 billion in funds over the next decade.

But lobbyists have long lobbied against proposals to close the loophole, and many of those same lobbyists have targeted Sinema in particular on the IRA, taking out ads in Arizona to sway the lawmaker against the proposal. Instead of the carried interest proposal, Democrats have added a 1 percent excise tax on companies’ stock buyback plans to raise funds, according to CNN.

Sinema had also raised concerns about the 15 percent corporate minimum tax proposal, which is the main revenue raiser in the bill. In fact, lobbyists said that she had directly asked business groups in private calls if the proposal was “written in a way that’s bad” for the businesses. But nixing the minimum tax would weaken Manchin’s goal of reducing the deficit, and it’s unclear if the proposal is still in the bill.

Currently, the bill contains about $433 billion in new spending, $369 billion of which will be directed toward climate initiatives that it is estimated will reduce greenhouse gas emissions by 40 percent by the end of the decade. But the bill also includes major giveaways to the fossil fuel industry — giveaways so significant that executives at major oil and gas companies like Exxon have thrown their support behind the package.

Another proposal to allow Medicare to negotiate a limited number of prescription drug prices made it into the bill, which is a mere shadow of last year’s Build Back Better Act. At its smallest, that bill was worth $1.75 trillion, and included a wide range of proposals that are now off the table, like guaranteed paid family leave.

Schumer announced on Thursday that the Senate will be taking the first steps to pass the bill when the chamber reconvenes on Sunday. If it passes with all 50 Democratic votes, the chamber will begin a “vote-a-rama,” an often cumbersome process during which lawmakers can introduce an unlimited number of amendments to the bill. The bill will then go to the House.

Some such amendments will come from Sen. Bernie Sanders (I-Vermont). Because Democrats have made significant concessions to Manchin and his corporate and fossil fuel donors, the bill is now much weaker than what progressives had originally wanted last year. As such, Sanders announced on Wednesday that he would be introducing provisions to remove proposals to expand the oil and gas industry from the bill and to expand Medicare and the drug price plan, and encouraged others to introduce amendments to strengthen the package.