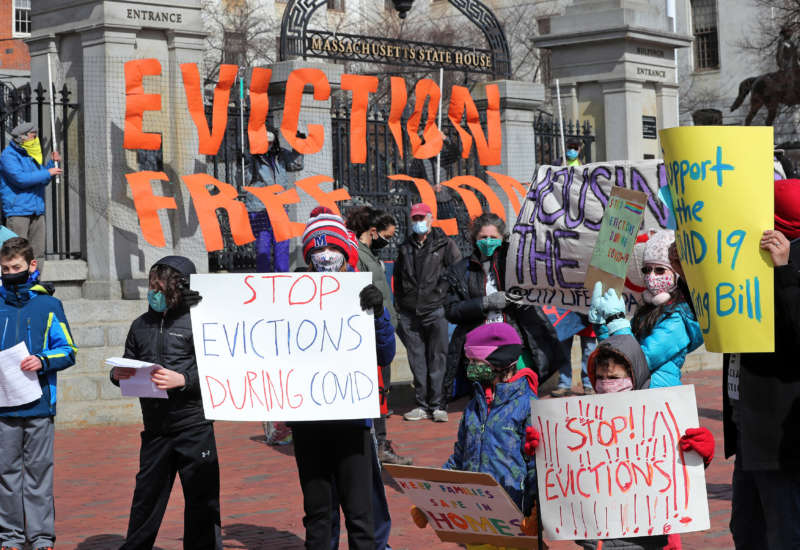 Delivering another blow to people across the United States still struggling financially during the coronavirus pandemic and related economic crisis, a Trump-appointed federal judge on Wednesday vacated the Centers for Disease Control and Prevention’s temporary federal eviction moratorium, which was set to expire at the end of next month.

“The Covid-19 pandemic has presented a historic threat to the nation’s public health. Keeping people in their homes and out of crowded or congregate settings — like homeless shelters — by preventing evictions is a key step in helping to stop the spread of Covid-19,” CDC Director Rochelle P. Walensky said in March, when the agency extended the moratorium until June 30, amid estimates that 12 million U.S. tenants were behind on rent.

Go back to work (laid off, oh well!), sacrifice your health and put your life on the line during a pandemic or else….

Property must be obeyed. That’s #capitalism.@DemSocialists

In a 20-page ruling (pdf) expected by legal experts, Judge Dabney Friedrich of the U.S. District Court for D.C. wrote: “The court recognizes that the Covid-19 pandemic is a serious public health crisis that has presented unprecedented challenges for public health officials and the nation as a whole. The pandemic has triggered difficult policy decisions that have had enormous real-world consequences. The nationwide eviction moratorium is one such decision.”

“It is the role of the political branches, and not the courts, to assess the merits of policy measures designed to combat the spread of disease, even during a global pandemic. The question for the court is a narrow one: Does the Public Health Service Act grant the CDC the legal authority to impose a nationwide eviction moratorium? It does not,” concluded the Trump appointee, confirmed in 2017 by a 97-3 vote in the U.S. Senate.

A US Court with a Trump appointed Judge vacated a nationwide eviction moratorium. The Courts were packed for a purpose and prioritizing wealthy over the poor is part of the payback. #EndTheFilibuster #ExpandTheCourts https://t.co/R52RaphZig

Friedrich’s ruling comes in response to one of multiple legal challenges to the moratorium, including another in which an Ohio-based federal judge determined that the CDC overstepped its authority. The U.S. Department of Justice, which represents the CDC in such disputes, is appealing a similar ruling by a federal judge in Texas.

In a series of tweets about the development, Diane Yentel, president and CEO of the National Low Income Housing Coalition, said it is “infuriating” that landlords are continuing to push for evictions during the pandemic just as $46 billion in rental assistance slowly reaches renters in need.

“Several district courts have attempted to strike down moratorium, but all had limited application,” Yentel noted. “There are now numerous conflicting court rulings at the district court level, with several judges ruling in favor of the moratorium and several ruling against.”

The DOJ should immediately appeal the flawed ruling & Biden admin should continue to vigorously defend and enforce the moratorium, at least until emergency rental assistance provided by Congress reaches the renters who need it to remain stably housed.

Like Yentel, Emily A. Benfer, a law professor and expert in health and housing justice, urged the Justice Department to appeal Friedrich’s decision:

In a decision that jeopardizes U.S. ability to control the pandemic, U.S. District Court for DC vacated the CDC moratorium. @DOJPH must file for stay pending appeal; Congress must ratify the moratorium (again); states must adopt moratoriums. pic.twitter.com/nY3c8Vtrts

Other advocates and reporters also took issue with the judge’s reasoning and warned of the impact that the ruling could have on renters.

Jennifer Epps-Addison, co-executive director of Center for Popular Democracy, said the ruling “will cause irreparable harm to millions of families across the country who have been devastated by the economic and global health crisis.”

“Right now, nearly one in seven renters are behind on rent and the eviction moratorium provided temporary relief for families who were on the brink of losing their homes,” she said. “This ruling has stripped critical housing relief from millions of families and will force them and their children into homelessness or unsafe housing. This decision will remove the precarious safety net that has kept families in their homes and will have long-term consequences for them and their children.”

Calling on the Biden administration and Congress to take immediate action, she added that “the Covid-19 pandemic has laid bare the inequalities in our housing system” and emphasized the need for long-term protections for tenants during the crisis.

“Our families voted for support and guidance through this pandemic,” Epps-Addison said, “and it is the Biden administration’s responsibility to ensure they continue receiving it.”

Just as America is starting to turn a corner on coronavirus, the CDC’s eviction moratorium was struck down under the sweeping theory that it does not regulate economic activity or substantially affect interstate commerce. That is flatly incorrect as a matter of law and economics. pic.twitter.com/ESoAKSI41O

A potential victory for landlords but a jolt for renters as a federal judge vacates CDC’s eviction moratorium that was put in place to help people keep their homes during the pandemic. #evictions #CDC #renters #landlords #COVID19 #coronavirus #pandemic https://t.co/gElPPzac8j

The Hill noted that the ruling comes as landlords are trying to throw out tens of thousands of tenants for nonpayment, citing a study from the Private Equity Stakeholder Project that found across just seven states, corporate landlords filed more than 56,000 eviction actions since the moratorium first took effect last September.

Renters and housing advocates, meanwhile, have argued that the CDC’s moratorium is far from enough and called on Congress to also cancel rent and enact housing debt forgiveness during the public health crisis. In March, Rep. Ilhan Omar (D-Minn.) and other progressives reintroduced the Rent and Mortgage Cancellation Act.