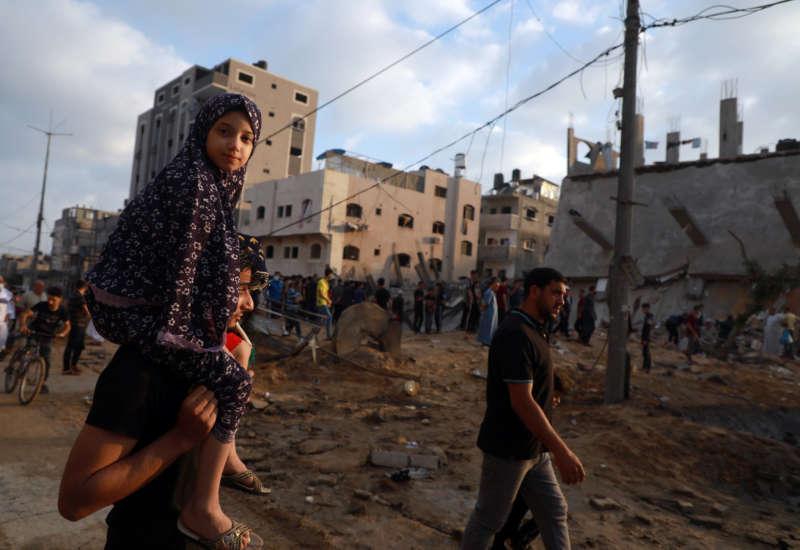 Speaking to reporters, Biden said that “Israel has a right to defend itself” from rocket attacks emanating from Gaza and expressed hope that the latest round of violence — which observers fear could descend into all-out war — will “be closing down sooner than later.”

But the president, who mentioned his earlier phone call with Israeli Prime Minister Benjamin Netanyahu, notably did not denounce Israel’s attacks on worshipers at the Al-Aqsa Mosque compound earlier this week, nor did he condemn Israel’s killing of civilians and destruction of residential buildings with airstrikes on Gaza — an ongoing bombing campaign that has left more than 80 Palestinians dead.

“Blanket statements like these with little context or acknowledgement of what precipitated this cycle of violence — namely, the expulsions of Palestinians and attacks on Al-Aqsa — dehumanize Palestinians and imply the U.S. will look the other way at human rights violations. It’s wrong,” said Ocasio-Cortez, echoing other critics’ depiction of Biden’s comments as a “green light” for Israel to continue its deadly attacks.

“By only stepping in to name Hamas’ actions — which are condemnable — and refusing to acknowledge the rights of Palestinians, Biden reinforces the false idea that Palestinians instigated this cycle of violence,” the New York Democrat continued. “This is not neutral language. It takes a side — the side of occupation.”

Blanket statements like these w/ little context or acknowledgement of what precipitated this cycle of violence – namely, the expulsions of Palestinians and attacks on Al Aqsa – dehumanize Palestinians & imply the US will look the other way at human rights violations. It’s wrong. https://t.co/afCgoGdiMG

Jewish Voice for Peace Action, a progressive advocacy organization, applauded Ocasio-Cortez’s response to the president, tweeting: “This is not a complicated situation. The Biden administration is defending a government that is forcibly displacing Palestinians from their homes, assaulting Palestinian worshipers, and raining bombs on an open air prison.”

In a readout of Biden’s call with Netanyahu on Wednesday, the White House said the president “conveyed his unwavering support for Israel’s security and for Israel’s legitimate right to defend itself and its people, while protecting civilians.”

Earlier this week, a State Department spokesperson refused to say whether the Biden administration believes that Palestinians have the same right to self-defense as the Israelis.

As U.S. officials publicly insist they are doing all they can to deescalate the violence, the Biden administration on Wednesday continued to block the release of a United Nations Security Council statement aimed at reducing tensions. Agence France-Presse reported that 14 of the 15 members of the body supported adopting the joint statement, with the U.S. remaining the lone opponent.

“During a first emergency meeting on Monday, the United States also refused to back a text proposed by Tunisia, Norway, and China calling on all parties to refrain from provocation,” AFP noted.

Kate Kizer, policy director with U.S.-based advocacy group Win Without War, slammed the Biden administration’s stonewalling of the U.N. Security Council statement, warning that “shielding other governments from accountability for violations of the ‘international rules-based order’ simply because it’s politically expedient gives a blank check for others to do the same.”

“We are actively creating the culture of impunity that drives our collective insecurity,” Kizer said.