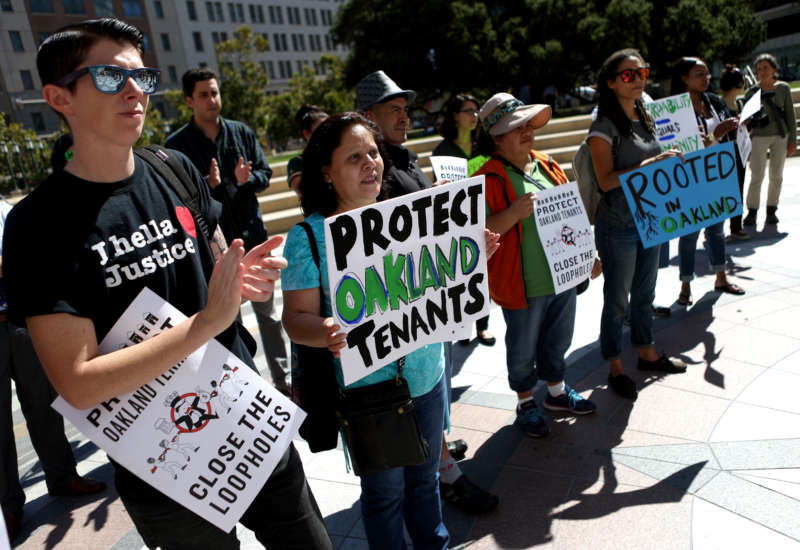 Fifty billion dollars. That’s the amount of past-due rent accumulated during the first year of the pandemic, according to some estimates. And with the Centers for Disease Control and Prevention’s (CDC) eviction moratorium now facing trouble in court and set to expire at the end of June, the situation for renters in this country has become even more precarious.

Just in the past few months, two federal relief bills have allocated $50 billion toward rent relief — pretty much exactly what the over 10 million “delinquent” renters in this country owe to their landlords. On the surface, these bills seem like a straightforward solution to the rent crisis — a measure that could stop millions from being evicted. However, upon closer examination, things aren’t quite that simple. Yes, the relief money is there, but will it actually get to the renters who need it the most? That’s a whole different story.

The problem is that each state has its own way of distributing the funds to tenants and landlords, and in some states like California, the relief is means-tested and subject to certain conditions that can make it extremely difficult to acquire. For example, California’s Senate Bill 91, which passed in January, approves paying landlords 80 percent of their tenant’s back rent, but only if they agree to forgive the remaining 20 percent.

This stipulation puts tenants in the difficult position of having to negotiate with their landlords, some of whom are unwilling to forgive any of their tenants’ debt and would rather see them evicted. Further, to qualify for the federal funding, the unpaid rent must be owed by a tenant who earned less than 80 percent of the area median income in 2020 or at the time of application.

“A lot of tenants are finding themselves not able to qualify and are having a really difficult time navigating the arcane bureaucracy,” Justin Gilmore, co-founder of Oakland-based Tenant and Neighborhood Councils (TANC) told Truthout. “Many tenants are being denied these funds for reasons that are correct or not correct — from the tenant movement’s perspective, it doesn’t matter if the tenant qualifies or not under this bill; the rent should be canceled regardless.”

TANC is a tenant-run, -operated and -funded tenant union built out of the East Bay Democratic Socialists of America chapter. Responding to the housing and rent crisis that has been plaguing California’s Bay Area for decades now, and which has only been exacerbated by COVID, TANC is part of a growing tenants’ rights movement in the United States which encourages tenants to form unions to collectively bargain with landlords to win rent reductions, end discrimination and evictions, and ultimately transform the housing sphere into one which prioritizes people over profit.

“S.B. 91 has created a nightmare situation for tenants — it strikes me as a classically neoliberal solution to a problem that is not going to go away any time soon,” Gilmore said. “It’s a quasi-optional program that allows landlords to recoup money, but with strings attached. And it puts the onus of doing all of this on tenants.”

Further, Gilmore and others at TANC believe that the bill not only does not go far enough, but that it also was in fact created in a way that “depoliticizes and individualizes the burgeoning tenant movement, because now tenants, instead of trying to address their direct situations, are trying to plead with their landlord to go through a bureaucratic process with them so that they can get some rent relief.”

TANC has been working with tenants across Oakland to make sure that they are able to navigate the bureaucracy around S.B. 91 and also to use the bill as a strategic opportunity to organize more tenants into “councils” so that they can collectively bargain with their landlords for favorable concessions. The idea is, if a single tenant is up against a single landlord, the landlord holds most of the power. But if an entire building rises up against a landlord, suddenly the power shifts dramatically.

“There’s this groundswell of organization that has challenged the landlord-tenant relation.”

For example, according to Gilmore, while negotiating over S.B. 91, one group of tenants was able to demand the cancelation of 30 percent of their back rent as a condition for applying for federal funds, instead of just 20 percent. Others are even negotiating for rent reductions moving forward.

“There’s this groundswell of organization that has challenged the landlord-tenant relation that circumscribes a process between an individual tenant and an individual landlord,” Sam Lefebvre, a TANC member, told Truthout. “But through organizing, tenants have really challenged that. And that’s important to recognize because when we look at S.B. 91, or the ‘landlord bailout,’ as I call it; it really is a sort of militancy-quelling piece of legislation meant to maintain the landlord-tenant relation as it was pre-COVID. It reasserts that one-to-one landlord-tenant dynamic, which is fundamentally disempowering and exploitative for tenants.”

It’s unclear why California’s legislature decided to shape S.B. 91 the way they did, although it might have something to do with lobbying efforts by groups like The California Apartment Association, the state’s most powerful landlord lobbying group. Other states have much more straightforward and tenant-friendly rent relief programs. New York’s program, for example, pays landlords 100 percent of the rent they’re owed — not just 80 percent. If landlords don’t agree to accept the relief, they are deemed to have waived the rent, and their tenants’ debt becomes uncollectible.

Another issue that arises with California’s rent relief program is ensuring equitable access, particularly when it comes to information barriers. The application, for example, is only available online, not on paper, and for now, the website is only in English and Spanish.

These information barriers aren’t unique to California — they permeate all of the rent relief efforts coming out of Washington: According to an Urban Institute study, fewer than half of landlords and fewer than a third of tenants surveyed know about rental assistance. The survey also revealed that tenants with challenges paying rent — disproportionately Black and Latin American tenants — are less likely to know about the assistance than those who are not struggling.

“Race equity has really been the untold story during the pandemic,” John Pollock, coordinator of the National Coalition for a Civil Right to Counsel, told Truthout. “There has been some reporting on the disparate impact of COVID itself on communities of color, but the effect that that then has subsequently on an already disproportionate eviction system has not really gotten the discussion it deserves.”

According to data from the Household Pulse Survey, which began in mid-2020, there is a consistent gap between Black and Latin tenants versus white tenants in terms of their exposure to eviction risk. Mostly, people of color have been twice as likely to report that they’re unable to make rent or that they fear eviction. And with the CDC’s eviction moratorium set to expire soon, the threat of eviction is on the horizon for millions of households.

“If the moratorium does get lifted, it’s going to be a disaster,” Pollock said. “The process of getting rent relief is not fast — tenants have to complete a fairly complex application, there are some fairly substantial documentation requirements, and then the states have to actually receive them all and review them and process and cut checks. And what we know right now is that there’s a big lag between when people are applying and when they get a check.”

Without the moratorium, it’s possible that landlords might not be willing to wait for this whole process to be completed and instead opt to evict their tenants.

“In fact, some landlords are already evicting their tenants,” Pollock said. “Either in violation of the moratorium, or because they’re relying on certain exceptions to the moratorium.’

Although there are unique municipal-level and county-level moratoriums, California’s statewide eviction moratorium is scheduled to expire at the end of June — the same time as the CDC’s federal moratorium. This makes it that much more important for tenants to continue organizing and building collective power to ensure they have a roof over their heads come July.

“Our power as tenants rests in our ability to collectively exert social pressure,” Lefebvre of TANC told Truthout. “During COVID in Oakland, like many places, there was an upsurge in tenant organizing. We’ve seen our membership swell by hundreds, with people coming together with their neighbors and making demands of their landlords.”

“We’re seeing the start of a tenant movement, something historically new in this country,” Gilmore of TANC told Truthout. “It’s picking up pace, and though still small, it’s acquiring some power. This is just the beginning of what is going to be a longer struggle that tenants, in the long term, intend to win.”