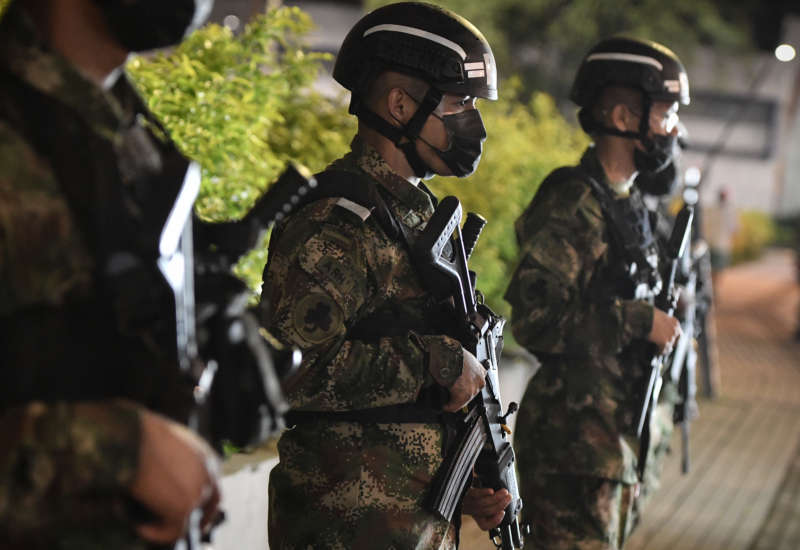 United Nations High Commissioner for Human Rights Michelle Bachelet responded to the Colombian president’s decision to deploy thousands of troops after a month of protests by calling for an end to all violence and urging negotiations over key national policies, which had stalled but were set to resume Sunday.

Bachelet, in a statement Sunday, specifically expressed concern about reports that since Friday, at least 14 people have died and 98 people have been injured in the Colombian city of Cali — one of the primary protest sites over the past month — and that an off-duty judicial police officer and others have fired at demonstrators.

“These events are all the more concerning given the progress that had been made to resolve, through dialogue, the social unrest that erupted a month ago, following the start of a nationwide strike against several social and economic policies of the government,” she said. “It is essential that all those who are reportedly involved in causing injury or death, including state officials, are subject to prompt, effective, independent, impartial, and transparent investigations and that those responsible are held accountable.”

“I call for an end to all forms of violence, including vandalism, and for all sides to continue talking to each other, and to ensure respect for the life and dignity of all people,” she continued. “I welcome the commitment voiced by several actors, in Cali and at the national level, to find a negotiated and peaceful solution to the social unrest through talks.”

Referencing reports that at least 30 people were arrested Friday, Bachelet added that “the fair trial and due process rights of those detained need to be ensured.”

.@UNHumanRights chief @mbachelet voiced her “deep concern” at recent events in the Colombian city of Cali that include reports of several deaths and violence.

She called for an end to all forms of violence, including vandalism: “dialogue is the only way”.https://t.co/ksJq8aKFfJ

The events in Cali and other parts of Colombia show the need to “strengthen dialogue as a fundamental instrument to resolve conflicts,” he said. “In any circumstance, even the most difficult, we must promote dialogue. Consolidating a stable and lasting peace in the country is my greatest wish and, I am sure, that of all Colombians.”

The demonstrations that began on April 28 were initially sparked by a now-postponed tax reform plan, but protest leaders have since shifted the focus to poverty and police violence in the South American country. World leaders and human rights defenders across the globe have condemned the state’s deadly crackdowns on the protests.

Citing interviews and video analysis, the New York Times reported that Colombia’s “police officers have fired bullets at peaceful protesters, beaten demonstrators in custody, and fired tear gas canisters or other forms of ‘less-lethal’ ammunition at people from close range.”

While Colombian demonstrators continue to face police violence the US government continues to sell weapons to Colombia. @POTUS cannot allow this to continue. https://t.co/xR95Dorvdi

After a month of protests and street blockades, Colombian President Iván Duque on Friday ordered a military intervention. According to the Wall Street Journal, “Some 7,000 soldiers were to be sent out Saturday and in the coming days in the southwestern province of Valle del Cauca and the city Cali.”

Duque said he would send a “maximum deployment” of troops to Cali “as a measure to protect citizen rights.” He added that “islands of anarchy cannot exist in our country” and “we must always maintain a spirit of understanding the clamor of citizens, of interpreting it and listening to it — but never because of violence.”

The deployment order intensified concerns about the safety of demonstrators. José Miguel Vivanco, the Americas director for Human Rights Watch, tweeted that Duque’s decree contains a “dangerous void” and could have “irreparable consequences.”

“The orders issued do not include any explicit reference to prioritizing dialogue, avoiding excessive force, and respecting human rights,” Vivanco noted.

Some Colombians are fed up with the roadblocks — which, according to Reuters, have caused shortages of food and key supplies. The outlet reported that “waving flags and dressed in white, thousands marched in Colombia’s capital Bogota on Sunday to demand an end to protests and roadblocks, as well as to express support for security forces.”

More than 1,140 troops have arrived in Cali and begun dismantling the roadblocks that antigovernment demonstrators have assembled on major thoroughfares. The plan is 7,000 troops in all in that province and thousands more in nine more provinces. https://t.co/w2giTykmB0 via @WSJ

The demonstrators who have spent over a month in the streets, meanwhile, are fed up with the long-term conditions of their country.

“There’s no future for young people as things are now,” Sergio Briceño, a 20-year-old laborer at a roadblock near Bogotá, told the Journal. “This is why we’re fighting here for a future.”

The newspaper noted that protest leaders initially made a list of over 100 demands “that included a prohibition on hydraulic fracking, new restrictions on mining, an end to certain taxes, and limits on the privatization of state firms” to end demonstrations, but it has since been pared down; the list reportedly still includes “a basic guaranteed income for more than half of the country’s 50 million people, a moratorium on home-mortgage payments, a range of subsidies, and a free university education.”