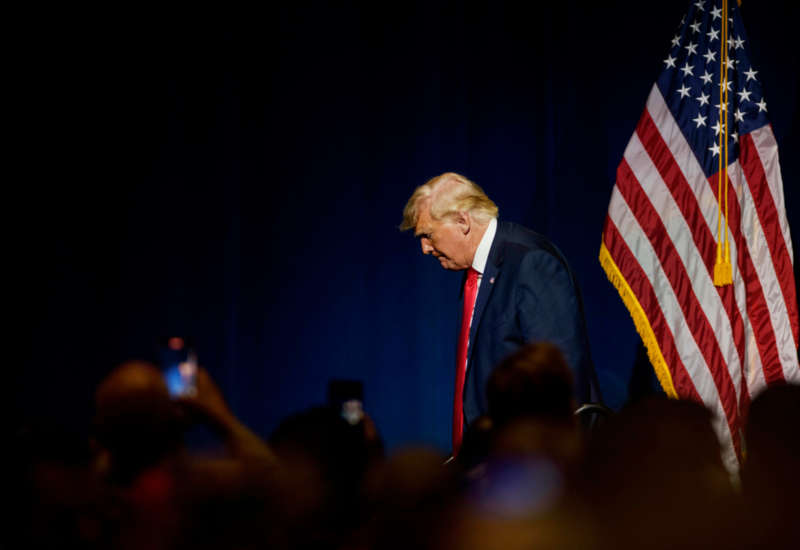 I have mostly failed to be impressed by the “blockbuster” books about the Trump administration that have come out over the years. Part of it is simple exhaustion; the man was screaming at me from the TV when most of these books came out, so who needs it? The “revelations” were few and far between because Trump’s White House was itself an open book thanks to the leaks and the former president’s own unfiltered bluster. He’s a venal racist sexist blowhard who can’t be trusted? GET OUT NO WAY.

Of all the Trump books that have emerged, only Bob Woodward’s Rage really brought the lumber when it came to new information. Somehow, Woodward got Trump on tape admitting that he knew COVID-19 was incredibly lethal and transferred via aerosol in February of 2020, right when Trump was publicly downplaying the menace posed by the virus. Again, people knew Trump had bungled the COVID response badly, but to hear him say these things three months before the 2020 election was devastating.

There’s a new Trump administration book coming out next week, and I’ll be reading this one. Washington Post journalists Yasmeen Abutaleb and Damian Paletta gathered more than 180 interviews with senior staff and leading medical experts to create Nightmare Scenario: Inside the Trump Administration’s Response to the Pandemic That Changed History. The Post published an article about the book today, and that small glimpse is harrowing.

I enjoy learning new things, but I never wanted to know that Trump tried to send infected American cruise ship passengers to Guantánamo Bay, Cuba. “Don’t we have an island that we own? What about Guantánamo?” he asked in February of 2020, the same month he was accidentally telling Bob Woodward the truth. Trump’s aides were horrified, but he kept pushing the idea, relenting only when some other shiny object diverted his attention.

“Testing is killing me!” Trump railed at then-Health and Human Services Secretary Alex Azar on March 18. “I’m going to lose the election because of testing! What idiot had the federal government do testing?” Azar was forced to remind Trump that Jared Kushner, his son-in-law and Jack-of-No-Trades, had announced he was taking charge of a national testing program just five days earlier. Trump’s response: “This was gross incompetence to let CDC develop a test.”

That paragraph is the distilled essence of the Trump administration’s handling of the COVID-19 pandemic. Seventy-four words, and all the truth you can stomach. The failure to roll out even the most gossamer testing program in the early phases of the pandemic put hundreds of thousands of people in the ground, and the dying is not over. Why? Because high numbers of positive tests might make Trump look bad before the election.

That was Trump’s only priority throughout, and we are still dealing with the aftermath. Matters have improved dramatically, to be sure. The Biden administration is investing billions into viral research. Testing rates are higher, just about half the country is vaccinated, and only 90 people died of COVID yesterday. “Only”? Yes, only: Some 5,077 people died on February 4, 2021, a year after Trump told Bob Woodward he was hiding what he knew to be the truth.

Meanwhile, Trump deliberately poisoned half the country with the idea that science is the enemy and coronavirus is no big deal. It’s a political statement of freedom to refuse the mask and the vaccine, he not so subtly inferred day after day after day — all, again, to help win the election — and million of people rallied to his banner.

“Don’t we have an island that we own? What about Guantánamo?”

Now, many of those people continue to die. Infection rates in high-vaccination areas are plummeting, while infection rates in low-vaccination areas are climbing with fearful intensity. As it turns out, most of those states were carried by wide margins by Trump in November of 2020. “So Connecticut, for example, where I am, shows no upsurge of infection,” former Food and Drug Administration (FDA) head Scott Gottlieb told Face the Nation on Sunday, “but Mississippi, Alabama, Arkansas, Missouri show very substantial upsurges of infections. That’s based entirely on how much population-wide immunity you have based on vaccination.”

The Delta variant of COVID is making itself at home in these places, and young people are getting sick in disturbing numbers; Delta is more contagious, and most young people are not vaccinated yet. President Biden, speaking at a Friday news conference at the White House, implored young people to get the shots. “The data is clear,” he said. “If you are unvaccinated, you’re at risk of getting seriously ill or dying or spreading it.”

I’ll buy the book by Abutaleb and Paletta, I’ll read it, and like as not I’ll damage the wall plaster with it when I’m done. Their book may be finished, and I hope it is a great success, but our story is far from over.

We are all characters trapped within the passion play of an autocratic dunderhead who gets his ass kissed more than the Blarney Stone because there’s money to be made, and the entire Republican Party knows it full well. If COVID comes roaring back in unvaccinated pro-Trump communities when the weather turns this fall, nobody should be surprised. It did not have to be this way.

Square to buy Afterpay, which offers a ‘buy now, pay later’ service, for $29 billion in stock