Mitch McConnell Says Bipartisanship Is “Over.” Believe Him. 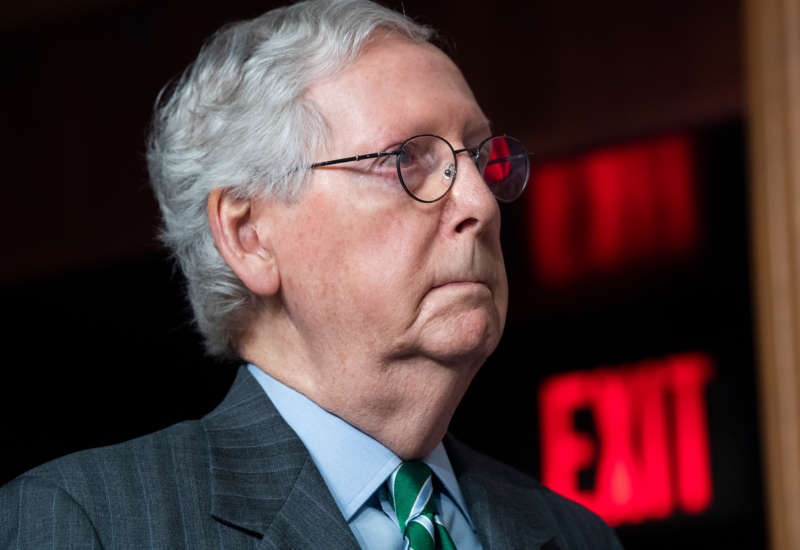 The seemingly ceaseless Biden administration push to find bipartisanship in the piranha pool of Congress is going to have to deal with Rep. Chip Roy first. Roy, a Republican congressmember from Texas, was caught on hidden camera holding forth on the GOP’s plans for the long months between now and the 2022 midterm elections.

Speaking specifically about the dual infrastructure proposals put forth by the administration, Roy made the Republican position abundantly clear. “Honestly, right now, for the next 18 months, our job is to slow all of that down until we get to December of 2022, and then get in here and lead,” said Roy. Responding to a later question about infrastructure, Roy dismissed the administrations proposals as “liberal garbage” before saying, “I actually say, ‘Thank the Lord. Eighteen more months of chaos and the inability to get stuff done.’ That’s what we want.”

Clearly, the “18 months” reference indicates this video was taken back in May, but absolutely nothing has changed in the intervening weeks. If you doubt this, look no further than Kentucky, home state of Senate Minority Leader Mitch McConnell. McConnell returned to the Bluegrass State for the two-week July 4 congressional recess to brag about the money Kentucky would get from the stimulus bill he voted against, and to promise that nothing else like that was coming if he had his way about it.

NBC News national political reporter Sahil Kapur recently attended a question-and-answer session between McConnell and Kentucky voters. Either McConnell was channeling Chip Roy or Roy was channeling McConnell, but both of them appear to be reading from the same script.

“[The stimulus bill] passed on a straight party line vote,” said McConnell. “So you’re going to get a lot more money. I didn’t vote for it, but you’re going to get a lot more money. Cities and counties in Kentucky will get close to $700-800 million. If you add up the total amount that’ll come into our state: $4 billion…. So my advice to members of the legislature and other local officials: Spend it wisely because hopefully this windfall doesn’t come along again…. We’ve floated entirely too much money.”

Not that we needed further clues here. McConnell’s game plan has been vividly obvious for 13 years now, and he shows no signs of relenting just because President Biden’s approval ratings are high and his infrastructure proposals are wildly popular, even among Republican voters. That is not the game for Mitch, and make no mistake: For him, it is all a game.

McConnell has pledged to cause the death of Biden’s infrastructure plans, not because he believes they are bad for the country, but because he flatly refuses to let “the other side” have anything close to a victory.

McConnell has pledged to cause the death of Biden’s infrastructure plans, not because he believes they are bad for the country, but because he flatly refuses to let “the other side” have anything close to a victory.

McConnell’s best protection from any consequences for his actions lies in the elemental nature of his party. According to a swath of recent polls, a quarter of the U.S. population now qualify as “highly right-wing authoritarian.” Nearly half of Republicans believe state legislatures should have the power to overturn elections. Close to 40 percent of Republicans support acts of violence to “protect the country.” Some 70 percent of Republicans believe Donald Trump is still the president, and 30 percent of them believe he will be returned to office somehow in August.

These people are not going to punish McConnell for his intransigence, even if it causes them pain in their everyday lives. Biden’s mistake is emblematic of a broader misstep that impedes Democrats and liberals when they confront “fascists, authoritarians and other illiberal forces,” warns Salon’s Chauncey DeVega. “Yes, the economy and ‘class’ are important, but fascist movements are also fueled by dreams of a fictive past and a return to ‘greatness,’ power, and dominance for one’s social or demographic group.”

That sounds exactly like Trump’s campaign platforms from 2016 and 2020. If he runs in 2024, it will be his platform once again. This is the monster in the room, and McConnell is prepared to ride it for as long as he can stay in the saddle.

A recent announcement by the so-called Problem Solvers Caucus — five Democratic senators and five GOP senators — endorsed a framework for the first half of Biden’s infrastructure plan that would not include new taxes, the version Biden will probably have to settle for if he wants any form of this legislation to see the daylight. The second half of the proposal — the “human infrastructure” bill filled with what Chip Roy calls “liberal garbage” and what many of the rest of us call basic human needs — will pass by way of reconciliation or will not pass at all, period, end of file.

I suspect the coming weeks may see McConnell doing a rope-a-dope on the first half of the infrastructure plan, the one the “Problem Solvers” have endorsed, before ultimately doing all he can to undermine and eventually kill it. While this should harden Democrats’ resolve to pass the second half by way of reconciliation — and perhaps, God willing, finally inspire them to try and dismantle the pestiferous filibuster — there will be no true bipartisanship anytime soon.

That era is over. Mitch McConnell said so into a live microphone, and on such matters, I take him entirely at his word. Biden should stop fishing for these piranhas. All they want to do is eat him and his policies down to the bone.