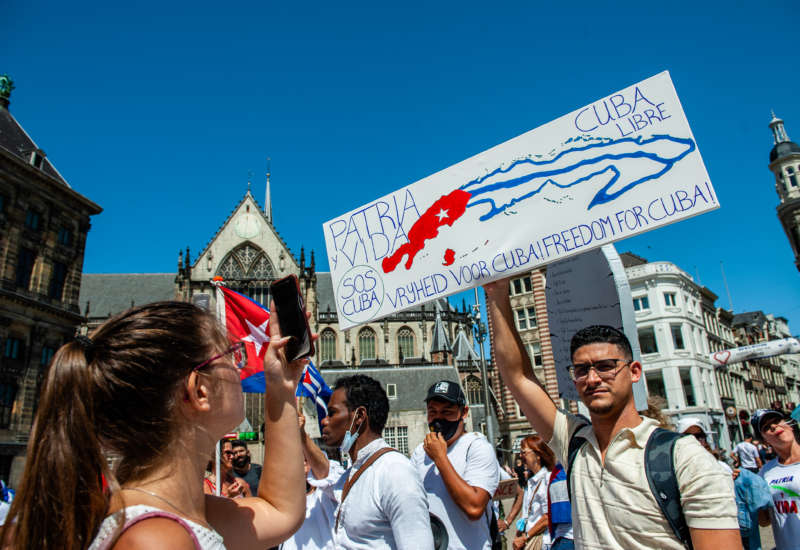 My mother is 68 and is now alone in Havana, Cuba. Since the beginning of the pandemic, we have met every night thanks to WhatsApp. For a long time, these brief, daily conversations allowed me to check on her, alleviating her loneliness from the COVID-19 lockdown. But our routine was abruptly stopped a few days ago, in the afternoon of Sunday, July 11, when the Cuban government started to restrict access to the internet. We are now incomunicadas, like almost everyone else on the island. Only pain and sadness linger, as an invisible link between all Cubans.

The shutdown of the internet was the first muzzling measure. It was imposed just a couple of hours after the outbreak of the popular protests that have rattled the whole country for several days on the week of July 11. As Cubans live through the deepest socioeconomic and political crisis in decades, thousands took to the streets, peacefully asking for food, medicines, the acceleration of vaccination against COVID-19, freedom of speech, economic reforms and political change.

The habitual shortage of food and first aid products and the energetic deficit have been aggravated by the stagnation of the tourist industry due to the pandemic and the U.S. government hindering of the flow of remittances sent by Cuban-Americans to the island. This year, the Cuban government introduced a series of economic reforms that triggered inflation resulting in popular discontent. In the last weeks, Cuba has also known a cataclysmic COVID wave: Cases skyrocketed, placing the island as the fifth country with most daily infections in Latin America. The globally recognized Cuban Health System has been a source of pride for Cubans, thus the COVID crisis exacerbated became a powerful source of disillusionment. Movements like San Isidro and 27N, protesting police brutality and for more civil liberties, have been particularly active during the last months, increasingly support among the youth and intellectuals and artists.

On July 11, the people’s demands weren’t received with attentive listening, as one would expect from the leadership of a Revolution “of the humble, with the humble, and for the humble,” as Fidel Castro said in the Socialist Declaration on April 16, 1961; instead they were met with scorn, vilification and, worst, violent repression. In recent days, Cuban people have been brutally chased through the streets by the police, regular military forces and undercover agents. Even squadrons of the Special Units, with their black uniforms, threatening weapons, and unmuzzled dogs, were deployed into the streets. Also known as the Black Wasps (avispas negras), the elite combat commandos of the Revolutionary Armed Forces (FAR) are highly skilled and purposely trained to defend the island from military offensives.

However, in the rare and shocking videos leaked despite internet restrictions, anyone who dares to watch could see the patrolling troops running, threatening unarmed people and beating them. “We are not afraid,” many in the crowd shouted. After three days of protests, an estimated 200 Cubans are considered disappeared, presumably arrested. The killing of one man has been officially disclosed.

Violent confrontation between Cubans was explicitly incited by the president, Miguel Díaz-Canel, when he announced that “the combat order [was] given,” inviting “the revolutionaries” to fight in the streets. Lurking behind these words, there is a rhetorical — yet crucial — confusion.

Who are the Cuban people — the “revolutionaries” — here? Are they the middle-aged, light-skinned men comfortably sitting in a well-climatized salon in the Palace of the Revolution — or “the Palace,” as the president calls the government headquarters — to discuss the destiny of the lives of the humble, of those protesting in the streets, the lives that none of these men share? Or are they the protesters — Cubans of all races, genders, and ages, sweaty and depleted, shouting their frustration in a desperate effort to gain some control over their own lives?

They are not a politically monolithic group. A multitude of people struggling week by week to make ends meet includes Cubans of diverse ideological and political positions. In the crowd were members of the Cuban left who criticize certain aspects of their society while defending the gains of the Cuban Revolution, such as the young Marxist Frank García Hernández. He was arrested as he participated in the demonstrations in Havana, along with LGTBQ activists Maikel González Vivero and Mel Herrera. Also detained was the dissident artist Luis Manuel Otero Alcántara, leader of the “San Isidro” movement, who recently held a hunger strike in protest of state censorship. In the protests, some participants clearly voiced their thirst for freedom and desire to put an end to the Castroist regime. Others articulated their anti-government sentiment as explicitly anti-communist. Everyone, regardless of their ideological choice, seemed to share the same exhaustion and deprivation, drowned in an intolerable feeling of asphyxiation.

When the Cuban government responded with violence to the claims of the people whose interests they are supposed to defend, it acted like any other government anywhere in the world, rather than following the socialist character that once defined the revolution. For some, this is a difficult truth to accept.

I understand how hard it could be for the global left to process these unprecedented events. Aspects of Cuba’s original revolutionary project have for decades fueled leftist imaginations. Perhaps this is what has drawn some on the left to focus so single-mindedly on discussions of the U.S. embargo’s huge role in creating the economic desperation driving the protests without also wrestling with the complexity of the protest movement and the painful reality of the state repression that the protesters have faced.

I understand them, I insist, because for me, a Cuban woman born and raised on the island between the 1970s and 1990s, it’s even more devastating to see the Cuban troops intended to protect the country against its enemies instead beating their neighbors. Does this mean that the masses of Cuban people who are protesting are now seen as the enemy?

Like me, many Cubans have been sleepless lately, viscerally perturbed by those images. We are suffering, for our people in Cuba, for ourselves, for the future of the nation. Dreadfully, uncertainty looms over our days.

But, still, I understand. I can understand that, for the global left, if Cuba fails to cast the image of the socialist exception, where is then hope to be found? On what grounds to build utopia? The current situation in Cuba brings up uncomfortable emotions, steered by these questions.

Thus, many on the Left are hesitant to listen to the claims of Cuban protesters over the state’s official tale. This saddens me, even though, as I continue to make clear, I can understand the political — and existential — crisis behind their fears. But I think the Cuban people deserve better. More solidarity, perhaps. Solidarity with the hospital workers and doctors who have attained Cuba’s profound medical achievements and saved lives throughout Latin America. Solidarity with the Cubans that barely escaped death when fighting in Angola in a bloody, long civil war, whose end propitiated the termination of South African apartheid. Solidarity with the state-owned hotel employees that regularly serve contingents of European, Latin American or Canadian tourists; with the maids, cooks, gardeners always smiling, entertaining their tropical fantasy. They or their children, their neighbors and friends were the people protesting this week. Cuba’s Abdala and Soberana, the first COVID vaccines developed in Latin America, weren’t invented, fabricated and administered by the bureaucrats in the “Palace.” The Cuban people, those that took the streets to change their lives and were repressed by the government, are the ultimate generators of Cuban wealth.

Lifting the embargo would considerably contribute to the improvement of Cuban’s lives. It would also help hold the Cuban government responsible for truly providing for its people (since it would no longer be able to attribute all problems to the embargo). The terrible impact of the almost 60-year-old embargo, and particularly the tough sanctions implemented by former President Donald Trump during his tenure, is undeniable. These restrictions and sanctions must be lifted. But to limit the solution to ending the embargo is rather simplistic.

The Cuban situation is far too complex to involve only one factor. Not all its “mysteries” can be solved by removing the embargo. There are other, domestic problems, and those are the problems fueling the frustrations that launched multitudes to the streets. The government’s response to the popular upheaval unveiled some of them: If they insist that there’s no money to buy food and medical supplies, why are there enough resources for military training and to acquire the weaponry and equipment exhibited by the Special Units and deployed against people in the streets? Why is there money for weapons and not for syringes to complete the vaccination of the very same people that developed the vaccines Abdala and Soberana?

In the end, the disruption of the internet that makes my mother lonelier and more vulnerable has proved to be a successful strategy for the government. It is a twofold weapon, keeping Cubans uninformed of what is happening in their own country — as they cannot know where the demonstrations are being held and how they were crushed by the authorities — and simultaneously making it nearly impossible for outsiders to know what is happening on the island. The lack of knowledge and disinformation are certainly some of the reasons precluding the global left from realizing that it is possible to choose humanitarian internationalism over a small-minded nationalism. State violence must be denounced everywhere, even in Cuba, the last rampart of leftist hopes.

Acknowledging the mass nature of the protests in Cuba and explicitly condemning the state’s repression of the protesters does not require lessening the vehemence of their calls for the U.S. to end the embargo, or muffling their adamant opposition to U.S. intervention in Cuban politics. But it does mean that more people within the global left must make a real effort to gain an understanding of the realities on the ground in Cuba.