Expanding the Military Draft Is Not Feminism. Abolishing Draft Registration Is. 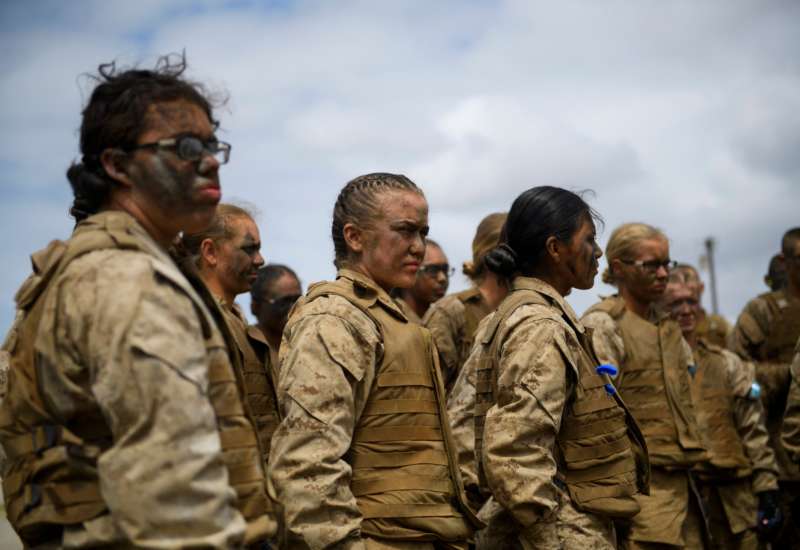 In the past year alone, nearly 3 million women in the United States have been forced out of the workforce due to coronavirus-related issues. Across the country, women are being pushed into crushing poverty as homelessness and mass incarceration rise among women and children at alarming rates, and health care, voting and reproductive rights continue to be under assault.

What’s the government’s response? Passing expanded paid family leave? No. Continuing expanded unemployment benefits? Absolutely not. Unwilling to provide solutions to the very real issues that everyday people are facing, Congress has instead found a way to suck more resources into the war machine: expanding the draft to include women.

The National Commission on Military, National, and Public Service is a task force created in response to a ruling by the courts in 2016 that the male-only U.S. military draft and draft registration was unconstitutional. This commission recently recommended that Congress expand “Selective Service” — the precursor to a general draft — to include women. Last March, despite 90 percent of public comments opposing expansion of the draft, the commission concluded its report with a recommendation to Congress to include women in the registration for the Selective Service. Too bad for them, because we know that our liberation will not be realized through war crimes.

As 18- to 25-year-olds, we are within the age range to have to register with Selective Service. As we face a global public health crisis, environmental disasters and increasing state violence, the recommendation for expanding the draft at this time should be seen as a declaration of war on all future generations.

Our generation is growing stronger. Young people are the emerging leaders of struggles for water in places like Detroit, and defenders of land and sovereignty of Indigenous nations. We have been on the streets in the battles for health care, voting rights and for a world that places life above profit. We have engaged in the Movement for Black Lives and last summer’s uprisings for George Floyd and Breonna Taylor. We have organized and participated in what have become the largest demonstrations for Palestine that the U.S. has ever witnessed.

We are a generation that understands that no matter how hard the military tries to co-opt feminism and progressive ideals, war will never be a part of a framework for imagining equity because the first casualty of war is always human dignity. As draft-age people, the only military draft system reform we support is the complete abolition of compulsory military service.

Our lives have been marked by lies, surveillance and the realization that our government is constantly trying to manufacture our consent for war.

We don’t just want to abolish selective service; we want to abolish the poverty draft, and U.S. militarism altogether. The U.S. military regularly uses economic coercion to bolster its numbers. Recruiters prey on low-income Black and Indigenous youth and communities of color who are simply trying to survive. Recruiters tell them that joining the military is the only way to achieve financial security. But if the U.S. is actually concerned about equity, it doesn’t look like selective service, and it certainly doesn’t look like an economy that forces young marginalized people to join the military.

The commission sees the draft recommendation as a “low-cost insurance policy against an existential national security threat.” We have seen how in the past, concerns about “national security” have led to atrocious civil rights violations including Japanese internment, racialized McCarthyism against Black activists and surveillance of Muslim Americans. These “concerns” have never panned out.

Our lives have been marked by lies, surveillance and the realization that our government is constantly trying to manufacture our consent for war. We know very well that the military-industrial complex is a violent and bloodthirsty monster, and we want nothing to do with it. The draft has always faced loud and public resistance, and it certainly will now too. Young people who oppose militarism will not let our friends buy into war propaganda.

In a nation that has the world’s largest military budget and more than 800 overseas military bases, we refuse to let our bodies be a source of endless cannon fodder and exploitation: One in four women in the U.S. military have reported experiencing sexual assault and more than half have experienced some form of harassment. Requiring women to register for the draft would endanger them in more than one way should they ever need to be selected.

The U.S. invaded Afghanistan by leveraging concerns about women’s rights under Taliban rule. Women’s rights will never be achieved through military occupation and bombing.

Moreover, the military shouldn’t be planning strategies that depend on having women like us available to kill, maim or morally wound. The U.S. invaded Afghanistan by leveraging concerns about women’s rights under Taliban rule. Now, after 20 years of military occupation, thousands of Afghan women have been killed and displaced by war. The Taliban was not deterred and took Kabul this week, shortly after the U.S. pulled out. Women’s rights will never be achieved through military occupation and bombing.

The words of civil rights activist Ella Baker echo in our vision for peace: “You and I cannot be free in America or anywhere else where there is capitalism and imperialism, until we can get people to recognize that they themselves have to make the struggle and have to make the fight for freedom every day in the year, every year, until they win it.”

Instead of expanding draft registration to women, Congress should abolish the Selective Service. The military doesn’t need it. The people don’t want it. Young people hate it, as evidenced by the low rate of compliance with the requirements to register and to report each change of address. Congress doesn’t want to have to pass it. Now is the time to end the draft system — in all its forms — for everyone.