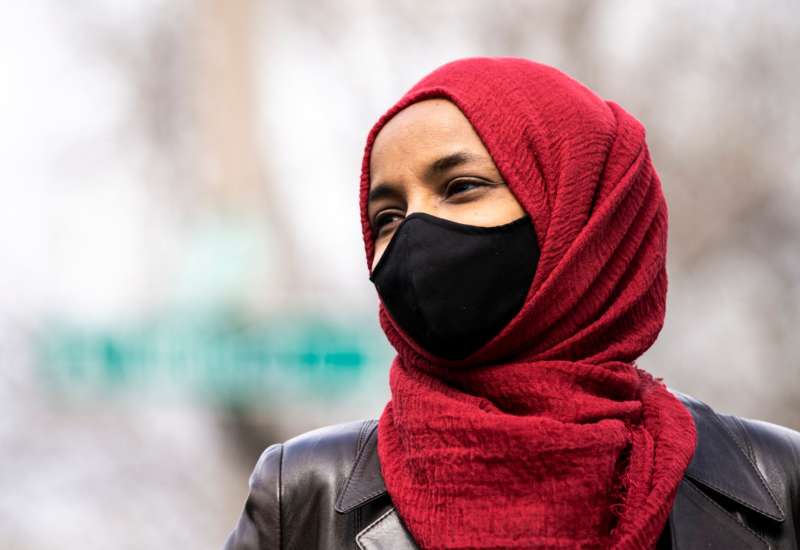 In her letter, sent to the White House on Thursday, Omar argues that Hale’s actions didn’t cause any direct harm to individuals in the U.S. and that his sentencing is more of a reflection of a Trumpian will to silence whistleblowers than it is about his crime.

Hale began leaking information during the Obama administration, which declined to prosecute him, she pointed out. “It wasn’t until 2019, under President Trump, that he was indicted. We are all well aware of the severe consequences of the Trump Administration’s chilling crackdown on whistleblowers and other public servants who they deemed insufficiently loyal,” Omar wrote, noting that she takes leaks of classified information seriously. “I believe that the decision to prosecute Mr. Hale was motivated, at least in part, as a threat to other would-be whistleblowers.”

Omar continued, saying that the intelligence made public by Hale should have been declassified to begin with. “The information, while politically embarrassing to some, has shone a vital light on the legal and moral problems of the drone program and informed the public debate on an issue that has for too many years remained in the shadows.”

In 2015, Hale leaked the truth about the U.S.’s drone program in the Middle East to The Intercept. The public learned that the Air Force had been routinely killing civilians with drone strikes, which the U.S. had sold as necessary to keep American troops out of danger in Iraq, Afghanistan, and other countries in the region. Nearly 90 percent of people killed in drone strikes, according to the leaks, were of “unintended targets.”

The drone program existed before Barack Obama took office, but Obama had ramped up the practice, according to intelligence leaked by Hale. Before the leak, the drone program had been shrouded in secrecy from even the most savvy investigative journalists.

Before he left office, Obama put in new requirements for reporting civilian deaths in counterterrorism programs, but the Trump administration quickly revoked those requirements.

“I believe that it is wrong to kill, but it is especially wrong to kill the defenseless,” Hale said in court last month. The information he leaked “was necessary to dispel the lie that drone warfare keeps us safe, that our lives are worth more than theirs,” he said. Hale was sentenced to 45 months in prison, and was being kept in inhumane conditions as of late July, when he was transferred to a Virginia prison.

Omar pointed to a letter that Hale had written before his sentence in which he outlined what he felt was a moral obligation to make the information public and his struggle with depression and post-traumatic stress disorder.

“I could only look on as I sat by and watched through a computer monitor when a sudden, terrifying flurry of hellfire missiles came crashing down, splattering purple-colored crystal guts on the side of the morning mountain,” he wrote of the first drone strike he ever witnessed. “Not a day goes by that I don’t question the justification for my actions.”

Omar said that Hale’s reasoning for his actions shows why the leak was necessary, calling his letter “deeply moving” and his motivations “profoundly moral.” While the legality of his actions have been decided, Omar said, the moral judgment from the White House remains.

“As you frequently say, the United States should lead not just by the example of our power but by the power of our example. I implore you to read Mr. Hale’s letter to the judge in full, and I believe you will agree that he was motivated by the same thing,” Omar wrote. “Acknowledging where we’ve gone wrong, and telling the truth about our shortcomings, is not only the right thing to do, but also an act of profound patriotism.”