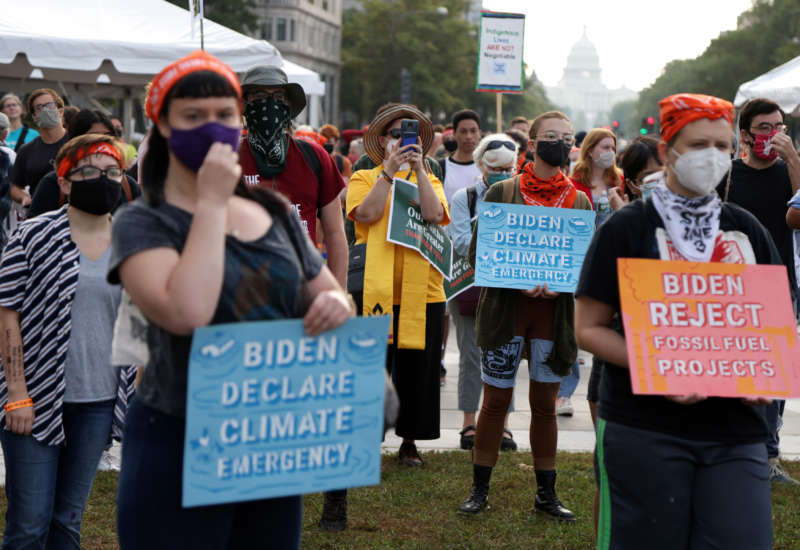 After months of waiting, environmental groups responded with disappointment tinged with outrage late Thursday after the White House released a report on the financial risks associated with the climate crisis — a document critics say would have been promising at some earlier point in history but that falls “pitifully” short given the urgency of the crisis and just ahead of a major U.N.-backed summit kicking off at the end of the month.

“It’s extremely disappointing to see this long-awaited report be so watered down by what can only be described as climate apathetic FSOC members,” said Jeff Hauser, executive director of the Revolving Door Project, in response to the “Report on Climate-Related Financial Risk” issued by the Financial Stability Oversight Council, which was created via executive order by President Joe Biden in May and chaired by Treasury Secretary Janet Yellen.

While the FSOC said in a Thursday statement that climate is “an emerging and increasing threat to U.S. financial stability,” critics say the determinations and recommendations put forth by the report are woefully inadequate give the scale of the crisis and the timeline that scientists and experts have made clear.

The report, according to Hauser, “fails to mention fossil fuels as the key driver of climate risk. It offers no specific timelines for any of its recommendations. And it does not include specific policy recommendations beyond disclosing and assessing risk. A terse summary of the report would read ‘it’s good to notice that our planet is burning, but we won’t do anything to fix it.’”

“After nearly 20% of Biden’s term in office and with only 98 months until 2030, by which time U.S. emissions must be cut in half to avoid climate catastrophe,” he said, “a report suggesting we learn more about climate risks without mitigating them is a failure.”

“This report might have been welcomed if it had been included as a memo five months ago accompanying President Biden’s executive order — but as the result of several months’ work, it is deeply disappointing,” said Reese. “FSOC’s inability to move beyond basic recognition of climate-related financial risk and refusal to recommend tangible actions to effectively mitigate that risk is woefully insufficient to meet the moment.”

Erika Thi Patterson, campaign director for climate and environmental justice at the Action Center on Race and the Economy, said the report “falls pitifully short” of the mandate which created the FSOC.

The final document on financial risk and what the U.S. is willing to do about it, she said, “leaves Biden with very little to show going into international climate negotiations in Glasgow, as it barely includes any new contributions from the U.S. government.”

What’s “even worse,” said Patterson, the report “is a slap in the face to Black, Brown, and Indigenous frontline communities that have been targeted by the fossil fuel industry and demanding that Wall Street stop funding projects like the Line 3 pipeline and Formosa Plastics.”

While CNBC’s reporting said the blueprint put forth by Yellen and the FSOC “could potentially move forward new regulations and oversight related to climate-based financial risk on Wall Street,” the critics from the environmental movement said the report should be seen as the latest example of government foot-dragging, powered by the reluctance of anyone to adequately confront the power of the fossil fuel industry.

For his part, Hauser rebuked Yellen for seeking consensus among the members of the FSOC when so many have such deep ties to Wall Street and the status quo operation of the financial industry. Hauser said:

While the report will allow do-good members such as the Securities and Exchange Commission to continue their actions to mitigate climate-related risks, it is clear that Yellen’s insistence on a consensus vote spoiled the report’s potential. Finding consensus between those who see or don’t see our climate reality is not democracy in action: it’s homicidal.”

Yellen should not have sought to appease Trump holdover members such as Federal Reserve Board Chair Jerome Powell, Federal Deposit Insurance Corporation Chair Jelena McWilliams (who voted to abstain anyways), and climate-denying Independent Insurance Expert Thomas Workman. These members are committed to upholding the myth that the financial status quo is sustainable rather than addressing the crisis before them. Yellen did not need their votes for the final report and she should not have given even an inch to get them. Yellen also may be acting to protect the renomination interests of Powell by making the report too inoffensive to oppose. For the Secretary to do so in the face of well warranted high expectations from climate finance experts shows no care for her own legacy or, more importantly, the financial and environmental health of the United States and the world.”

The White House should not have allowed Yellen to release such a pathetic report. Yellen has let down the billions of people who are counting on the U.S. to lead in mitigating climate change. This is a matter of life and death.

Brett Fleishman, head of finance campaigns with 350.org, also pointed that finger at Powell, arguing the Fed chair is a key reason for the report’s failure. His group and others have been campaigning for months for Biden to replace Powell — who was appointed by former President Donald Trump — with someone who will act more forcefully to align the U.S. economy with the imperative to rapidly transition away from a fossil fuel-based economy.

“This report affirms recognition of the dangers of the fossil-fueled climate crisis on our communities, financial system, and economy,” Fleishman said.

But because of Powell’s “historic foot-dragging,” he said, the Treasury Department “failed to live up to the bar of action” — an especially egregious missed opportunity with the COP26 climate conference in Glasgow set to begin on October 31.

If Biden wants to lead on climate, said Fleishman, the president “must replace Powell with a Fed Chair who will take climate risk seriously. Ahead of COP26, it’s time for swift and responsible transformation that steers our economy off fossil fuels, and stops the risky practices of climate destroyers on Wall Street. That’s why we’re making the Peoples’ voices heard.”