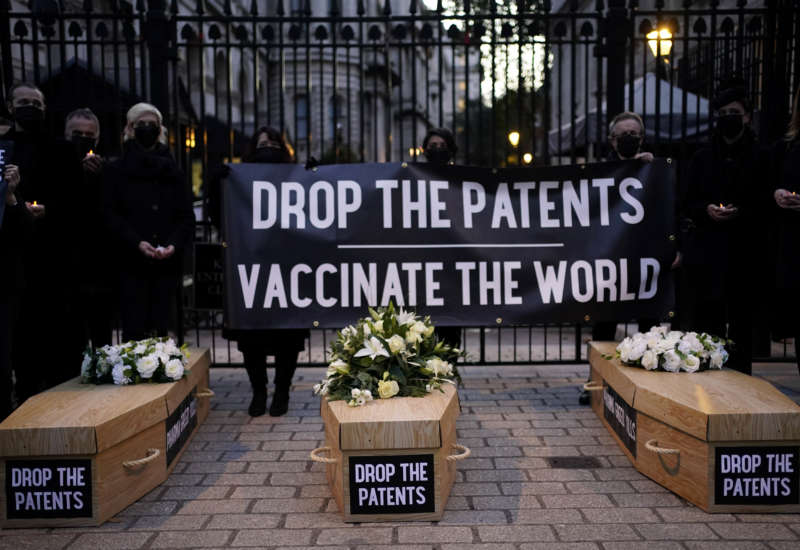 A group of over 130 national and international civil society organizations is demanding the World Trade Organization postpone its upcoming ministerial meeting unless it first agrees to adopt a patent waiver for Covid-19 vaccines seen by social justice campaigners as crucial to ending “vaccine apartheid.”

The groups laid out their demand in an open letter to WTO members just ahead of the in-person 12th ministerial conference set to begin Nov. 30 in Geneva, the latest sign of growing pressure on rich nations — including the U.S. — to move more urgently to end the pandemic.

Endorsers of the new letter include international groups such as Focus on the Global South and Friends of the Earth International as well as national groups like the Ghana Trade and Livelihood Coalition and Colombia’s Environment and Society Association.

The WTO, according to the letter, is “in crisis” and “has utterly failed to resolve the vaccine apartheid that is a direct result of the monopolies that its Agreement on Trade-Related Aspects of Intellectual Property Rights (TRIPS) confers on multinational pharmaceutical companies that have benefitted from massive public subsidies.”

A widely-backed proposed TRIPS waiver, opposed by a handful of nations including Germany and the U.K. and which needs consensus to pass, has languished without adoption for more than a year as vaccine inequity has deepened, the groups lament.

The letter pins opposition to that waiver on “the shameful refusal of a handful of powerful governments” and says it “confirms the WTO’s systemic priority of profits over people.”

Going through with the scheduled meeting as things are is problematic in light of “obvious inequities will favor those with Swiss-recognized vaccinations, ease of travel, proximity, and Geneva-based delegations — that is rich countries from the Global North,” the letter states.

A virtual or hybrid conference would be problematic as well, the groups argue, because some officials would face connectivity problems and be at a disadvantage compared to officials able to attend in person.

“Thus,” the letter states, “the institution whose rules enforce vaccine apartheid is, unbelievably, attempting to have a meeting under conditions of vaccine apartheid, without having first resolved that apartheid by agreeing to the TRIPS waiver. To proceed under these circumstances will further erode the WTO’s legitimacy, and undermine the credibility of the new director-general, at a time when the organization’s credibility is already at an all-time low.”

Member states must therefore direct their energy “on coming to urgent agreement on the TRIPS waiver.”

The open letter came as human rights defenders on Thursday threatened legal action against the German, Norwegian, and Canadian governments if they continue to oppose the TRIPS waiver, and as the Biden administration — which has endorsed the IP waiver related to vaccines — faces calls to more actively pressure European governments stonewalling the proposal.

In a letter to the White House this week, a coalition of U.S.-based organizations told Biden that “billions of people here and around the world are relying on you to deliver. Your leadership in securing a meaningful WTO waiver and helping to end the Covid-19 pandemic and the misery it is causing all of humanity is a moral necessity.”