Climate Justice Doesn’t Start With Politicians. It Starts in the Streets. 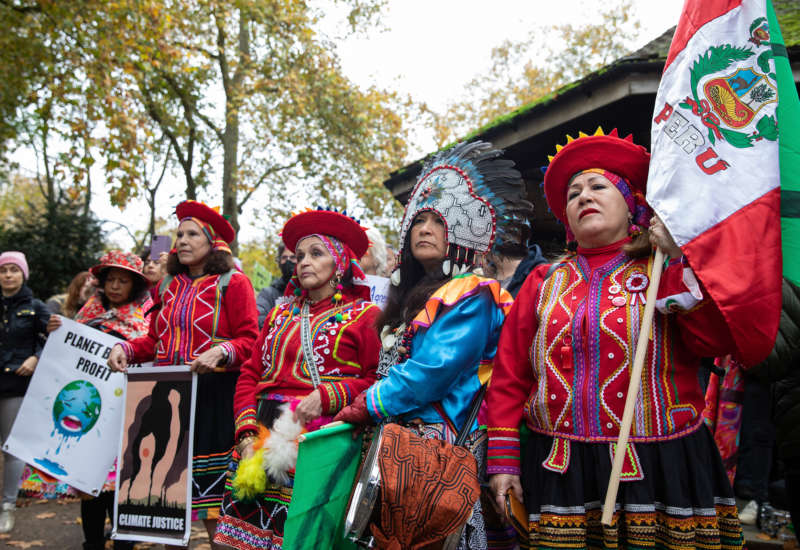 The outcomes of the 2021 United Nations Climate Change Conference (COP26) continue to be debated across the globe, although a clear consensus has emerged among activists that it was largely a failure. There may be some hope down the road, however, as coal appears to be on its way out and grassroots pressure to transform climate policy is on the upsurge.

Jennifer Morgan, executive director of Greenpeace International, attended COP26 and witnessed personally the power of protests in the streets, which, she says, was the real leadership on display in Glasgow. In this exclusive interview with Truthout, Morgan shares what transpired in Glasgow, what mechanisms can be implemented to end fossil fuel use, and how the end of the fossil fuel economy has the potential to challenge capitalism.

C.J. Polychroniou: I want to start by asking for your thoughts on COP26. What did it accomplish, and is there any reason to believe that leaders will make good on the pledges made?

Jennifer Morgan: Glasgow was meant to deliver on firmly closing the gap to 1.5°C and that didn’t happen. The final text was meek, weak and the 1.5°C goal is only just alive, but a signal has been sent that the era of coal is ending. And that matters. While the deal recognizes the need for deep emissions cuts this decade, those commitments have been delayed again until next year.

There was progress on adaptation, with the developed countries finally beginning to respond to the calls of developing countries for funding and resources to cope with rising temperatures. There was a recognition that vulnerable countries are suffering real loss and damage from the climate crisis now, but what was promised was nothing close to what’s needed on the ground, and this issue must be at the top of the agenda for developed countries.

Even though the mention of phasing out coal and fossil fuel subsidies is weak and compromised, its very existence is a breakthrough. The call for emissions reductions of 45 percent by the end of this decade is in line with what we need to do to stay under 1.5°C and brings science firmly into this deal. But what we actually need is for companies and governments to take meaningful and tangible action toward it.

The only reason we got where we did in Glasgow was because the youth, Indigenous leaders, activists and countries on the climate frontline forced concessions that were grudgingly given.

Unfortunately, while some of the worst bits have been removed, the offsets scam still got a boost in Glasgow, and there are still risks that this deal will support a greenwashing scam for the biggest polluters, with loopholes that are too big to tolerate, endangering nature, Indigenous Peoples and the 1.5°C goal itself. The UN Secretary General announced that a group of experts will bring vital scrutiny to offset markets, but much work still needs to be done to stop the greenwashing, cheating and loopholes giving big emitters and corporations a pass.

What COP26 showed was where real leadership is. The only reason we got where we did in Glasgow was because the youth, Indigenous leaders, activists and countries on the climate frontline forced concessions that were grudgingly given. Without them, these climate talks would have flopped completely. Young people who’ve come of age in the climate crisis won’t tolerate many more outcomes like this. We need to urgently mobilize to create irrepressible pressure for world leaders to act.

Those at the forefront of the fight against the climate emergency say we have to stop with the further expansion or exploitation of fossil fuels. Through what policy mechanisms can this be realized, and what is the role of Greenpeace International in helping to make this happen?

The breakup with fossil fuels is not only a necessity but also inevitable. Case in point, the compromise in the Glasgow Climate Pact on phasing out coal and fossil fuel subsidies is definitely not where we want it to be, but we have to acknowledge that it is a small victory in the sense that it’s the first time a call for coal reduction appeared on a COP final text.

But as this is a fundamental systemic change, we need all of the governments to be on board to make sure that this extractive and exploitative business of fossil fuels is well and truly choked off, and we transition as quickly as we can to sustainable sources of energy — in other words, no more money should be allowed for dirty investments.

Between the adoption of the Paris agreement in 2015 and 2019, 33 major global banks collectively poured $1.9 trillion into fossil fuels. The world needs $90 trillion in the next decade to achieve the goals set by the Paris agreement and the 2030 Agenda for Sustainable Development. Fossil fuel supply still attracts nearly three times more investments and subsidies than the solutions. Just 10 percent of these regressive subsidies could pay for the transition to a clean energy revolution — only 10 percent of the money we are dumping into outdated fossil fuels. This is why the governments must create, then properly and effectively implement policies so that no amount of money — subsidy, funding or bailout should ever reach the fossil fuel companies again.

In order to inherently gut our current neoliberal model and start prioritizing people, planetary health and international collaboration, we need a new socio-ecologically centered system that will put all living beings at the heart of it.

Fortunately, as more governments are realizing the true gravity of our climate situation, they are taking more action. In East Asia and Southeast Asia, we’ve been running campaigns against state-backed public development banks (PDBs) in China, Japan and South Korea to shift their overseas energy investments, and all three countries have announced [they will] either end or phase out overseas coal investments by the end of the year.

And through our latest Money for Change campaign, we’ve been targeting the European Investment Bank — the biggest public lender still financing fossil gas projects and some of the dirtiest companies in Europe while funding motorway expansion — by denouncing their hypocrisy and greenwashing.

But most importantly, we need to ensure that all policies have just transition at heart, and make sure we’re moving toward a more sustainable economy in a way that’s fair and inclusive for everyone. So, just as we’ve always done, Greenpeace will continue to put unyielding pressure on leaders all around the world to quit putting profit over people and the planet, as there is no money in a dead world.

A recently conducted survey reveals that the majority of people from China (93 percent), the European Union (81 percent), the U.K. (74 percent), and U.S. (59 percent) identified the climate crisis as the biggest challenge facing the world, but do not trust government officials to enact the necessary policies to combat global warming. From your own experience with the work at Greenpeace International, does strong grassroots activism increase the likelihood that governments will prioritize climate action?

The short answer is yes…. Just to reiterate what I said earlier about the real leadership at COP26, the youth, Indigenous Peoples, nations bearing the brunt of the climate crisis, and all other activists were critical to the small victory we saw. At the end of the day, there is power in numbers, and governments can only ignore truth for so long.

There are many examples that show the power people have. Movement-led climate court cases are bringing justice to those most impacted. In just three years, climate litigation cases have nearly doubled, and only last year, an unprecedented number of key judgments with potentially far-reaching impacts were issued, including the cases against Shell and against Germany.

In 2015, the world’s first investigation into corporate responsibility for the climate crisis, The Climate Change and Human Rights Inquiry, was launched in the Philippines to probe into the possible human rights violations of the 47 “Carbon Majors” — the biggest fossil fuel and cement companies. Originating from a complaint filed by typhoon survivors and civil society groups, depending on the outcome, this inquiry could have a monumental impact by rightfully placing the responsibilities of protecting human rights and achieving climate justice on the Carbon Majors and other corporations as we relentlessly face the climate crisis they have hugely contributed to.

You can also see how Indigenous-led movements are going against all odds and putting everything on the line in countries like Brazil, where the government is actively threatening Indigenous Peoples’ rights, to demand their lands and lives be protected. And [successful efforts] stopping pipelines in the United States and Canada — where 21 fossil fuel projects have been prevented or delayed — were all due to Indigenous-led resistance. This pressure works. It puts the struggles and efforts of those affected and impacted front and center, all the while exposing the systemic injustices of our current system.

Greenpeace just turned 50 this year, and for 50 years, we have been using peaceful protest and activism to bring about change. Our nonviolent direct actions have proved critical to the success of our campaigns, and we know we will continue to see bold and courageous activism beyond our work and in the wider global climate movement.

It is assumed by many analysts, commentators and even some policymakers that the end of the fossil fuel economy could bring about a transformation of capitalism. How so?

For many people today, everyday life is more often about survival, not progress. After centuries of exploitation, the same colonialistic mindset and practices continue today, threatening biodiversity, the lives of Indigenous People and vulnerable communities, and the global climate.

It’s the dark, sad truth that today’s profit-driven, extractive economic model works for the profit of corporations and the wealthy, urges destructive infinite growth, and is completely reliant on limitless extraction of natural resources.

The chaos and confusion of the COVID-19 outbreak has truly exposed some inescapable truths about how we live. It’s shown us how vulnerable, interdependent and interconnected we are. It’s clear that we can no longer continue to let a handful of the rich, including the extractive fossil fuel industry, become richer at the expense of the rest of the planet. Fortunately, we have been given a rare opportunity to reset and reimagine our future. By finally pulling away from the monocultural Western growth and development lens, we can have a future where life is not commodified, and where well-being, empowerment of people and communities are at its core, [as] opposed to infinite growth and the profit of the wealthy few. This would be a world shaped by cooperation, collaboration, solidarity, equality, dignity, adaptation and resilience.

But in order to inherently gut our current neoliberal model and start prioritizing people, planetary health and international collaboration, we need a new socio-ecologically centered system that will put all living beings at the heart of it. We must stop chasing short-term economic growth for a few, which is well exemplified by the current fossil fuel industry. Environmentalism cannot be separated from people, politics and the economy.