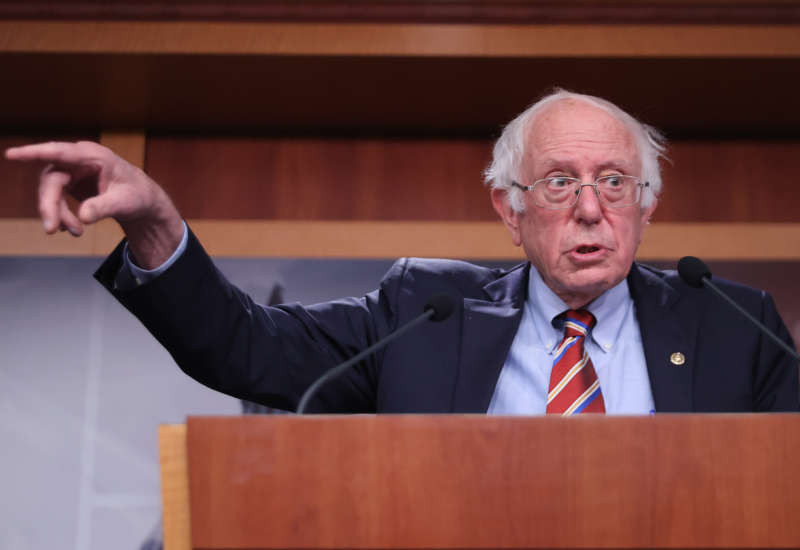 Sen. Bernie Sanders on Saturday called it unacceptable to sit back and watch the U.S. Supreme Court possibly end the right of women to access abortion care and said his colleagues in the Senate should act urgently to end the filibuster and codify into federal law the protections afforded by Roe v. Wade — the historic ruling now under the most severe threat since it was first decided in 1973.

In an email to supporters, the Independent from Vermont and former presidential candidate said a final decision by the court to uphold a Mississippi law that would ban nearly all abortions at just 15 weeks of pregnancy would “mean governments in many states would have the ability to make it virtually impossible for women to access an abortion.”

“The truth is, despite overwhelming opposition from the American people,” Sanders continued, “there is a very strong chance that this conservative Supreme Court will vote to overturn Roe v. Wade.”

Such an outcome is “not acceptable,” he said. “We cannot sit back and allow this Supreme Court to put in jeopardy the privacy rights of all Americans and a woman’s right to control her own body.”

Warning that the consequences of Roe being overturned “would be disastrous and threaten the very lives of American women — and that’s not an exaggeration,” Sanders said the obvious new reality is that the courts can no longer be trusted to defend a women’s fundamental right to choose.

“So Congress must act,” he said. “We must pass legislation that codifies Roe v. Wade as the law of the land in this country. And if there aren’t 60 votes to do it, and there are not, we must reform the filibuster to pass it with 50 votes.”

While the U.S. House in September passed the Women’s Health Protection Act (WHPA), mostly along party lines, the U.S. Senate remains the only obstacle to establishing a federal law.

In a tweet Saturday, Sanders suggested nobody in 2021 should accept the U.S. going backward on fundamental reproductive rights.

We can’t go back to the days when women had to risk their lives to end an unwanted pregnancy. We must pass legislation that codifies Roe v. Wade as the law of the land. And if there aren’t 60 votes to do it, and there are not, we must reform the filibuster to pass it with 50. pic.twitter.com/FNRsYED5Ct

In his letter, Sanders said the history of the GOP attack on reproductive rights has not only been relentless for half a century, but their entire assault ranks as “extraordinary hypocrisy”:

When it comes to ending the disgrace of the United States being the only major country on Earth that does not guarantee health care as a right, their response: “Gotta keep the government out of people’s lives.”

When it comes to stopping the drug companies from being able to charge outrageous prices for the lifesaving medicine people need in this country: “Gotta keep the government out of people’s lives.”

When it comes to asking people who want to buy a handgun or an assault weapon to pass a simple background check: “Gotta keep the government out of people’s lives.”

But when it comes to telling every woman in America what she can or cannot do with her own body, about whether or not she can access reproductive health care, now all of a sudden my Republican colleagues are exponents of very big and oppressive government. Whether it is at the local, state or federal level they believe that politicians should make the decisions regarding what is a deeply personal decision for women.

Earlier this week, following oral arguments Wednesday as the U.S. Supreme Court heard the Mississippi case known as Dobbs v. Jackson Women’s Health Organization, Sen. Elizabeth Warren (D-Mass.) was among the many who expressed alarm by indications that the right-wing justices on the court are more than willing to gut the protections provided by Roe.

One by one, the Republican-appointed justices came before the Senate and promised they’d respect precedent. They’d respect settled law. Well, Roe v. Wade has been law for nearly 50 years. So let’s see that respect. But we can’t wait—we must #EndTheFilibuster so we can codify Roe.

Appearing on MSNBC later that evening, Warren said that if the high court does overturn Roe there will be a run in GOP-controlled states to destroy access to abortions completely and it will be the poorest in those states hardest hit.

Asked if there was a legislative solution, Warren responded, “It is a filibuster problem.”

Like Sanders, Warren cited the existing Women’s Health Protection Act that she said “just says as a matter of federal law the decision to continue a pregnancy is a woman’s decision” and nobody else’s.

“We’ve gotten it through the House,” said Warren. “I believe we could pass it in the Senate but we can`t get 60 votes to get past a filibuster. This is one more time when we see the filibuster blocking the will of the majority. You know, anything that enjoys support across this nation at the level of 70 percent to 80 percent is something we ought to be able to bring to the floor of the United States Senate and vote on it.”

If WMPA was passed, she added, “the rule of Roe would then be the rule not just in Massachusetts or California or New York. It would be the rule all across the country. We’ve got to get rid of the filibuster.”