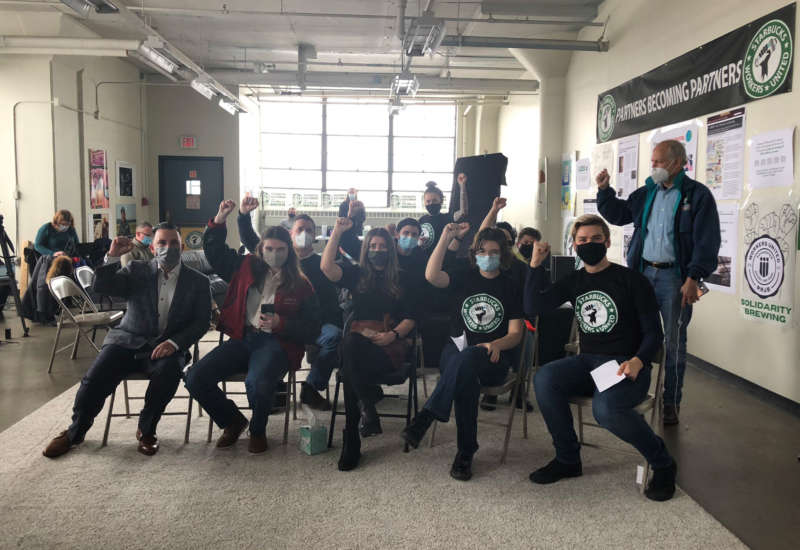 In a historic victory for the labor movement, workers at one of Starbucks’s 9,000 corporate-owned locations have voted to form the first-ever Starbucks union in the country, after facing tough opposition and union-busting efforts from the company.

Workers at the Elmwood location in Buffalo voted 19 to 8 in favor of unionizing under Starbucks Workers United, which is under the Service Employees International Union. Camp Road, the second store whose votes were being counted on Thursday, voted against the union 12 to 8.

Genesee Street, a store by the Buffalo airport, had several ballots that were disputed by the union and the company; as of Thursday, these ballots were not yet counted. Three other stores in the Buffalo area are in the midst of the unionization process but have not yet held an election.

The union drive has garnered national attention, with the support of Sen. Bernie Sanders (I-Vermont) and Rep. Alexandria Ocasio-Cortez (D-New York). Sanders congratulated Starbucks workers for their win on Thursday and called unionizing workers an “inspiration” at a town hall to support the drive earlier this week.

Congratulations to @SBWorkersUnited on the HISTORIC achievement of organizing the first-ever union at a company-owned Starbucks in the US. The company should stop pouring money into the fight against the union and negotiate a fair contract now. pic.twitter.com/yNiXOjzy2v

For years, Starbucks workers have spoken out about poor labor conditions, including issues with chronic understaffing, which were only intensified by the pandemic. Workers hope to negotiate for higher pay, better benefits, sick leave and more.

Employees previously told Truthout’s Candice Bernd that the pandemic has exacerbated already-hectic working conditions, with the company giving out fewer and fewer incentives even while it posts high profits as pandemic restrictions ease. Workers — or “partners,” as Starbucks refers to them — have also said that the company is sending waves of new employees to unionizing locations.

In the last month alone, employees have said that the company added around 30 new workers to unionizing locations in order to dilute the vote. According to Vice, Genesee Street is one of those locations.

The company has taken other steps in fighting hard against the union drive, resorting to tactics like filing a last-minute delay request in the union election, holding mandatory anti-union meetings and outright telling employees to vote “no.” The company has also sent former CEO Howard Schultz to speak to employees in relation to the drive and has deployed executives in undercover roles to talk to and surveil employees in unionizing stores.

In October, the company closed two unionizing locations for reasons it claimed were unrelated to the union drive. But workers disagreed, saying that it was an attempt to throw off organizing efforts.

Part of what allowed organizers to prevail was holding the company accountable to its own stated values, some workers said. Despite repeatedly taking steps that likely impede upon its workers’ right to form a union, Starbucks often claims to be a progressive company.

“Partners are standing up to say, ‘No, the company needs to be better. That’s why we came to this company in the first place, because it said it would be better,’” Camp Road shift supervisor Gianna Reeve told Truthout’s Bernd. “Essentially, put your money where your mouth is.”

The union formation is a watershed moment in the U.S. labor movement, which has been in the midst of a resurgence. It comes as other union drives have recently fallen victim to union-busting efforts by corporate behemoths, like the unionization effort of Amazon workers in Bessemer, Alabama.