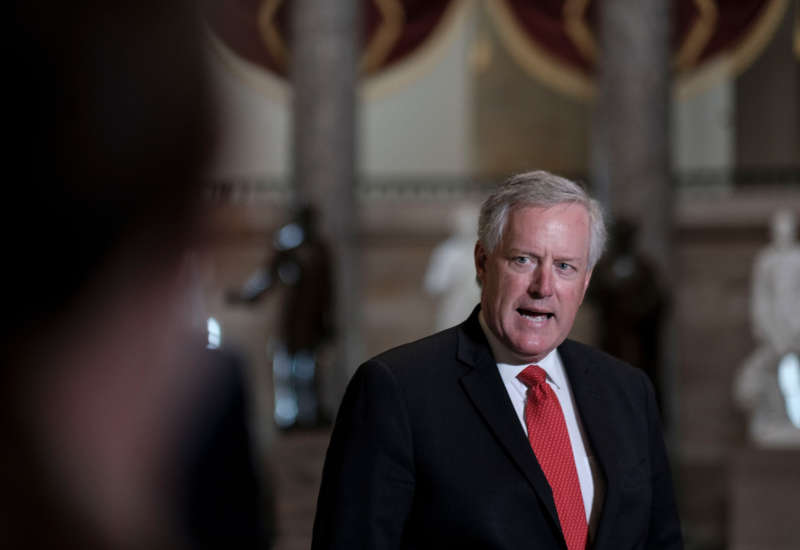 Mark Meadows, who previously served as chief of staff to former President Donald Trump, is suing the House select committee investigating the January 6 Capitol attack, alleging that the subpoena orders he was served are in violation of Trump’s executive privilege.

Meadows’s lawsuit, which also lists Speaker of the House Nancy Pelosi (D-California) as a defendant, claims the January 6 commission “lacks lawful authority” to compel him to testify or share records relating to the Capitol breach. The lawsuit also alleges that the subpoenas are “overly broad and unduly burdensome.”

“The Select Committee acts absent any valid legislative power and threatens to violate longstanding principles of executive privilege and immunity that are of constitutional origin and dimension,” the lawsuit contends.

Earlier this week, Meadows refused to testify regarding material he had already shared with the commission. Rep. Liz Cheney (R-Wyoming), who serves as vice chair of the commission, said that the former Trump official’s claims are invalid, noting that the panel’s investigators are mostly asking Meadows to elaborate on information he’s already provided to them.

“The committee has received a number of extremely interesting, non-privileged documents from Mr. Meadows,” Cheney has said. “These include text messages and emails from his private cell phone and private email account. He’s produced these documents, they are not privileged. They include documents that are directly related to what President Trump should have been doing on January 6 during the attack, and now he is refusing to appear to answer questions about those non-privileged documents.”

“We will fight it out in court, and we will move with as much expeditious format as we can,” commission chair Rep. Bennie Thompson (D-Mississippi) said.

The lawsuit came just hours after the select committee suggested that it would move forward with contempt of Congress charges against Meadows. Thompson sent a letter on Tuesday to Meadows’s lawyer, George Terwilliger, warning that if his client refused to cooperate with the investigation, he would face contempt charges.

Legal experts panned Meadows’s lawsuit against the commission for being “frivolous.”

The lawsuit’s “obvious motive is to try getting Trump back on his good side after outraging the former President with his tell-all book,” opined Laurence Tribe, Professor Emeritus at Harvard University.

Others noted that it was an odd legal strategy for Meadows to provide materials to the commission, only to turn around and say he wouldn’t discuss them.

“Mark Meadows cooperated with the January 6 committee, provided materials, then changed his mind and refused to come in for depositions. So he gave the receipts — and then skips his date to testify, so he’ll get indicted for contempt,” said attorney Tristan Snell.

Presidents often claim executive privilege to prevent communications they don’t want the public to know about from being released. Trump himself has sued to conceal documents from his final weeks in office, in spite of the fact that only sitting presidents have the formal right to make such claims of privilege. Biden formally rejected Trump’s executive privilege assertions back in October.

That lawsuit is still working its way through an appeals process, but last month, a federal judge rejected Trump’s complaint, noting in pointed terms that the former president was arguing for broad and expansive powers beyond his tenure in office.

“[Trump’s] position that he may override the express will of the executive branch appears to be premised on the notion that his executive power ‘exists in perpetuity,’” wrote Judge Tanya S. Chutkan of the U.S. District Court for the District of Columbia in her opinion last month. “But Presidents are not kings, and Plaintiff is not President. He retains the right to assert that his records are privileged, but the incumbent President ‘is not constitutionally obliged to honor’ that assertion.”

Goddess Diana Rituals and the Death of Anne Heche

Denmark Wants to Give Toddlers Access to Legal Gender Change

Goddess Diana Rituals and the Death of Anne Heche