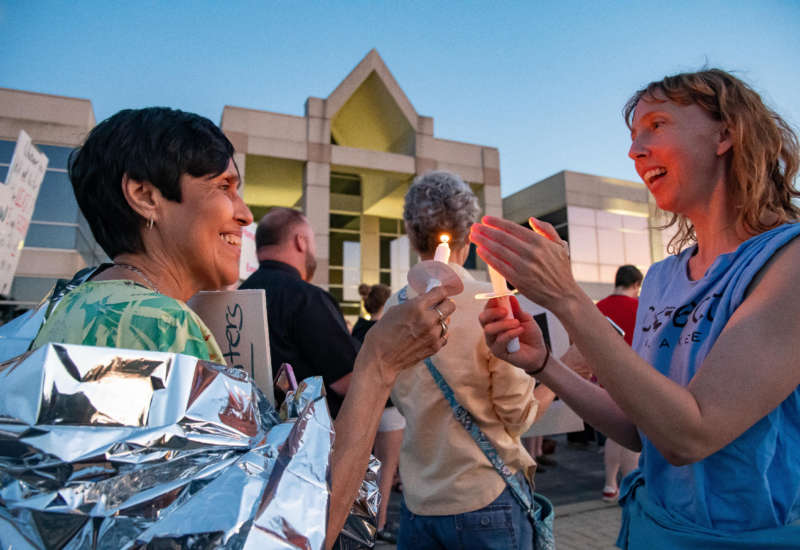 A federal judge dismissed a lawsuit against the Illinois Way Forward Act on December 6, 2021, making immigrant detention illegal in the state after the new law takes effect in the new year. The suit was filed by McHenry and Kankakee Counties, which were holding Immigration and Customs Enforcement (ICE) detainees at their local jails. Pending any further court action, the counties will need to end their contracts with ICE by the end of this year.

Johannes Favi spent 10 months and two weeks inside the Jerome Combs Detention Center in Kankakee, located an hour south of Chicago. He was released at the height of the COVID-19 pandemic because he had underlying conditions putting him at higher risk of death or health complications. “I’m very happy that the judge did what was right,” Favi told Truthout. Originally from Benin, West Africa, he now lives in Indianapolis, Indiana, on a work visa with his three kids. “It is time to advocate for the release of those people,” said Favi. “Families should be reunited.”

President Joe Biden initially came out opposing for-profit prisons and restored the Obama-era Sally Yates memo banning federal private prisons that Trump had undone. Since then, immigration leaders have been disappointed with Biden, whose administration has increased immigrant detention numbers by 70 percent and opened a new ICE jail in Pennsylvania. Thanks to the efforts of these advocates, states have passed legislation to push back against federal immigration policy.

Most recently, the Maryland General Assembly voted to override the governor’s veto of a similar bill prohibiting local jails from housing ICE detainees. New Jersey passed legislation banning any new contracts between ICE and local and private jails. Earlier this year, Washington State passed a bill shutting down for-profit detention centers in the state by 2025, and the privately run GEO Group was recently fined $23 million by a federal jury for exploiting immigrant prison labor. After a 2019 bill (based in California) banning private prisons, a legal battle ensued, with the Biden administration siding with the GEO Group.

In Illinois, activists have waged a 10-year battle against establishing an ICE detention center in the state. Chicago has historically had a large immigrant community, with the second-largest population of Mexican immigrants in the U.S. ICE has been searching to find a nearby place where it can hold its detainees. In 2019, Illinois Gov. J.B. Pritzker signed HB 2040, a bill outlawing for-profit ICE facilities in Illinois. ICE has been relying on anti-immigrant sheriffs to hold detainees at county jails in McHenry County, northwest of Chicago; Kankakee County, an hour south of the city; and Pulaski County, in far southern Illinois.

People in these communities, working with immigration groups and legislators in Chicago, advocated for the Illinois Way Forward Act, which passed this past spring and was signed into law by Governor Pritzker. Among other things, it prohibits local governments from entering into or renewing a contract to jail individuals for federal civil immigration violations, and requires that such begin the process of ending their contracts by January 1, 2022.

A letter signed by more than 60 organizations was sent to the Biden administration calling for the review and release of all ICE detainees in Illinois.

McHenry and Kankakee Counties filed a lawsuit against the state on September 1, 2021, claiming the Illinois Way Forward Act was unconstitutional. In early December, the lawsuit was dismissed by Judge Philip G. Reinhard, a federal judge in the Northern District of Illinois, who was appointed by President George W. Bush. In his eight-page ruling, he mentioned the recent challenge to California’s legislation limiting ICE detention, in which a federal appeals court ruled in favor of the federal government and GEO, citing the “Supremacy Clause” of the U.S.Constitution. Judge Reinhard distinguished the California law from Illinois Way Forward, characterizing federal and state powers as a relationship of “dual sovereignty.” While states are sovereign, he stated, “counties are not.”

Fred Tsao, senior policy counsel at the Illinois Coalition for Immigrant and Refugee Rights, told Truthout he was not surprised by the decision, saying, “The claims made by the counties were fairly weak.” The judge was clear, Tsao said, “States have authority to regulate what county jails do; it was nothing to do with federal functions.”

McHenry County State’s Attorney Patrick Kenneally and Sheriff Bill Prim, both Republicans, released a joint statement saying they were disappointed and would appeal. They called the Illinois Way Forward Act a product of one of the “most partisan and dogmatically rigid” legislatures in the state’s history. Kankakee County Sheriff Mike Downey feigned concern for immigrant families. In a press release, Downey said detainees would not be released, but transferred to other states, “all the while forcing families of these detainees to travel much farther to visit their loved ones.” However, Kankakee jail only has video visitations; there are no in-person visits. And Favi disputed the claim that detainees would be transferred further away from families: “90 percent of detainees are not from McHenry or Kankakee, but already coming from far away.”

Downey, a Trump supporter, has previously made inflammatory remarks about immigrants, characterizing them as criminals and rapists. At a county board meeting, he responded to activists by referring to immigrants as child molesters, saying, “If they really want people who commit sexual assault against 5-year-olds to get out of prison, then come out and say it.” Kankakee Board Chairman Andy Wheeler, also a Republican, said they would take the lawsuit as far as they could, “up to and including the U.S. Supreme Court.”

“ICE’s default is to transfer rather than release — so we will need longer-term cultural change at ICE to make sure that when facilities close, the people there go free.”

Since getting out of the Kankakee jail, Johannes Favi has become an advocate for other incarcerated immigrants. He serves on the boards of several organizations, including Connect Kankakee, an immigrant solidarity group. Dave Volden, also with Connect Kankakee, said the organization has held protests outside of the Jerome Combs Detention Center, used social media to draw attention, and gone to Springfield to lobby. He called Sheriff Downey one of the “most powerful politicians in the county.” No one was being jailed by ICE for violent criminal offenses, he said. “They are being held, often for years, for residency violations, such as entering the country without documentation.” Speaking with immigrants at the jail and their families, Volden found that, “many families, including children, are being irreparably harmed by detention while just trying to earn a living, pay their taxes, raise a family and contribute to their communities.”

The Coalition to Cancel the ICE Contract in McHenry County released a statement following the judge’s decision, saying they were “overjoyed” and “celebrate with all people impacted by unjust immigration policies.” The campaign has faced several setbacks, said a leader in the coalition, Amanda Hall, who lives in Woodstock, Illinois, the county seat. In May 2021, it was hard to watch the McHenry County Board vote in favor of “institutionalized racism” and keep the contract with ICE. It was another “low point” when the county decided to file a lawsuit.

But the judge’s decision shifted the ground for the immigrant rights movement.“It’s great to know that our immigrant community doesn’t have to live in fear,” said Hall, “and doesn’t have to think of Woodstock as the last stop before Mexico.” Sandra Dávila is a teacher in Elgin, Illinois, and another leader in the coalition. “It’s beautiful to know we took part in this,” she told Truthout. “ICE activity decreases when there’s no facility.”

Activists are now turning to what will happen in the new year for the approximately 130 detainees at McHenry and Kankakee jails. A letter signed by more than 60 organizations was sent to the Biden administration calling for the review and release of all ICE detainees in Illinois. They say ICE has the authority to release individuals, pointing out that most return to attend their pending court hearings. Rather than sending them far away from their home communities, the letter says, “a robust network of legal and social service providers throughout Illinois stand ready to support them.”

“I hope this court decision will act as motivation for other states to do what Illinois has done and defend their immigration populations from predatory detention contracts.”

After passage of the Illinois Way Forward Act, Pulaski County preemptively announced that it would end its contract with ICE. ICE gave a short window to review the cases of those held at Pulaski, sending immigration organizations scrambling to build cases for their release. Only three were released initially, while most were transferred to McHenry and Kankakee jails. Fred Tsao said they are trying to make sure this does not happen again. “We did not go through all the effort to pass state legislation only to see people still being detained out of state. We are already working to make sure that those people held at McHenry and Kankakee are released,” he said. “Unfortunately, ICE’s default is to transfer rather than release — so we will need longer-term cultural change at ICE to make sure that when facilities close, the people there go free.”

ICE has been trying to expand across the state line into Indiana for several years, and is now targeting Clay County, in rural west central Indiana. Sheriff Paul Harden, a Republican, already holds about 50 detainees for ICE. He is pushing for the county to spend $25 million on a jail expansion project to add 265 beds for ICE detainees. Tsao said he is working with a group of “enthusiastic leaders” opposed to immigrant detention who have been attending county commission meetings, canvassing and pursuing public records.

Illinois State Sen. Celina Villanueva, a Democrat from Chicago and co-sponsor of the Illinois Way Forward Act, reflected on the victory in an email to Truthout. “This is a win for immigrant communities not only in the state, but also throughout the country,” Villanueva wrote. “Prioritizing the safety and well-being of individuals within these communities reaffirms our commitment to safeguarding their rights, which historically have been taken from them by force and through systemic oppression. I hope this court decision will act as motivation for other states to do what Illinois has done and defend their immigration populations from predatory detention contracts.”