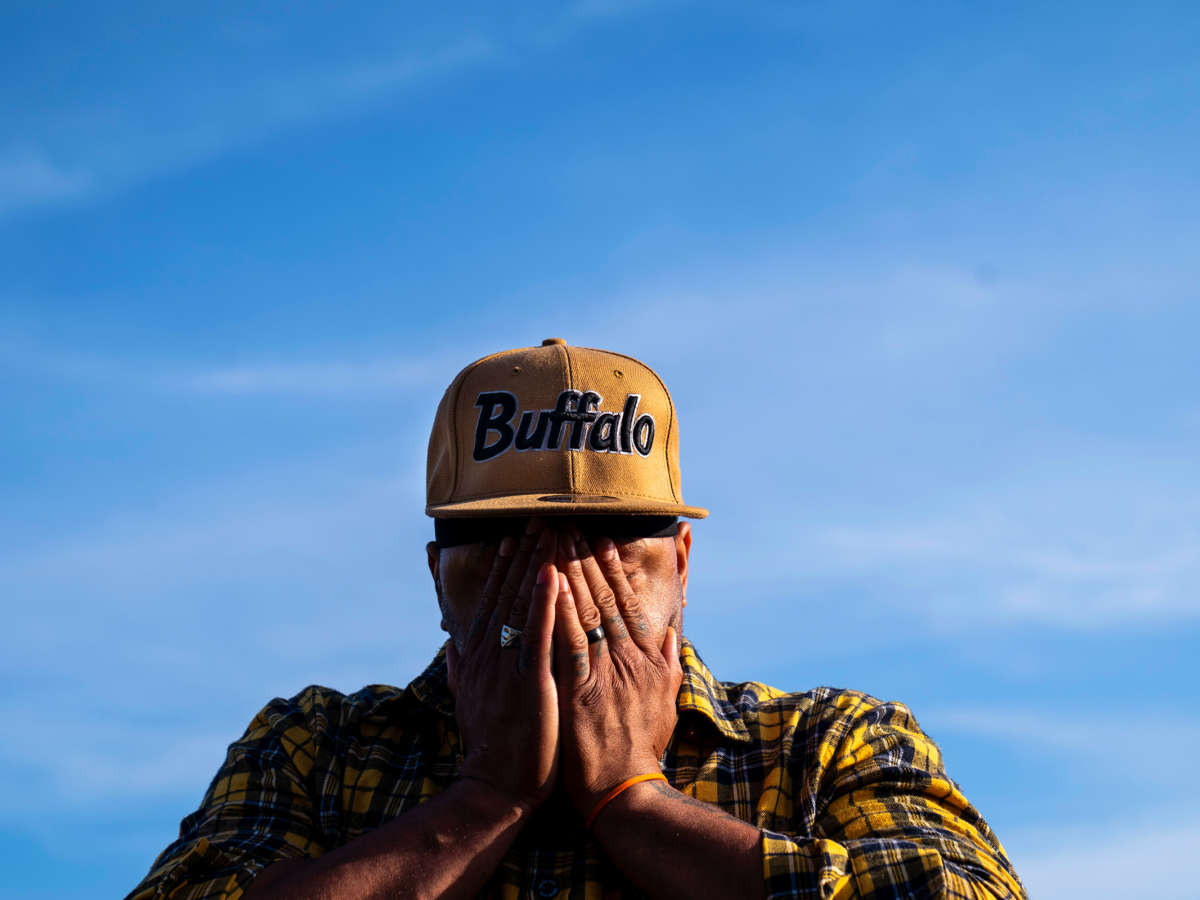 Originally published by The 19th

The young people at her high school were encouraged to take part in “circle time” where they share their feelings about the attack. Some are angry, Townsend said, and others are scared. An enhanced police presence at Buffalo Public Schools amid shooting threats have only heightened anxieties. But Townsend explained that her students have a social worker, counselors and psychologists they can turn to for help, as well as teachers like herself.

She told her students: “This is tragic for all of us to know that someone came into our community to hurt us just because of the color of our skin.”

Ten people died in the massacre. The community is still grieving. It took Townsend five days before she could drive past the supermarket, which is still closed off.

When she finally visited the site, “the emotions that flooded up in me were unbelievable,” she said. There, she saw people hugging, talking and eating together — a community trying to heal.

Outside Buffalo, students who encountered news coverage of the mass shooting also need comforting, education experts say. But educators who live in states where laws limit how they can discuss race, “divisive concepts” or current events took to social media this week to say they did not mention the racist attack in class for fear they would be penalized. It’s part of the latest wave of controversy over what parents, lawmakers and teachers say students should be exposed to when it comes to current events and the societal context surrounding them.

Scholars told The 19th that ignoring the anti-Black violence that transpired in Buffalo — and occurs elsewhere — does a disservice to students who need safe spaces to discuss real-world events and may benefit from an antiracist curriculum.

“It is important for teachers and other educators to talk about systemic oppression, but if you were to even just ask young people how they’re feeling right in the wake of what happened, that might be deemed inappropriate,” said Jinnie Spiegler, director of curriculum and training for the Anti-Defamation League’s (ADL) education division. “Talking about sensitive issues, divisive concepts, talking about structural racism, all of those topics are off limits. So, teachers are making choices, and it’s very hard because they don’t want to lose their jobs or be fined.”

Last year, 46,000 students, educators, administrators and staff in K-12 schools participated in the ADL’s anti-bias education programs, Spiegler said. But as laws are enacted prohibiting how teachers can address issues such as bias and hate, the organization has seen participation rates fall, though Spiegler didn’t specify by how much.

“We haven’t seen the effect yet of all the laws that passed this year,” she said. But she fears that what students learn about bias and hate will ultimately be determined by whether they live in a state that bans educators from broaching “sensitive” subjects.

Leah Watson, staff attorney with the American Civil Liberties Union Racial Justice Program, also decried the wave of legislation that limits discussions about race in the classroom. She said in a statement to The 19th that students and educators have a right to teach and learn in a censorship-free environment.

“Censorship bills that chill discussions about race not only impact how history will be taught in schools, but they also chill educators’ ability to help students understand how racism and discrimination manifest in current events and impact their own lives,” Watson said.

Spiegler takes issue with lawmakers leading charges to ban classroom materials and discussions about race and identity because White students might feel uncomfortable. She told The 19th that White youth are being recruited online by white supremacist extremists. In 2021, the ADL surveyed teens for the first time about whether they’ve been exposed to white supremacist ideology online, and 10 percent of them said they had. Spiegler estimates that the percentage of youth exposed to such ideologies is likely even higher; not all teens recognize white supremacist ideology when they encounter it because it is often disguised “as jokes and memes and sarcasm and humor.”

As such messages spread virtually, it is imperative that students be able to discuss bias in class and receive a curriculum that addresses these issues, Spiegler contends. When bullying, microaggressions and stereotyping are unchallenged and normalized among students, they can grow into more consequential and violent acts of bias, she said. In addition, ignoring racist violence like the Buffalo mass shooting sends a harmful message to students of color.

“It’s scary what happened,” Spiegler said. “It’s enraging. People worry about their personal safety, and if teachers are just like, ‘Open your math book,’ then what are they saying to young people? To me, it sends a message that they don’t value young people who are feeling harmed and marginalized by what happened.”

Prerna Arora, assistant professor of school psychology at Teachers College, Columbia University, said teachers enter the education profession to support students in ways that go beyond academics. Legislation that limits how educators can discuss race in class interferes with their ability to provide children with the support they need during trying times.

“My goal is to help educators and other adults help children become academically successful and socially, emotionally and behaviorally successful,” she said. “So we’re talking about how to develop the whole child, and if we restrict our ability to call out what’s happening, we hurt our efforts to help develop children who are not racist, who are anti-racist, who are understanding and loving and respectful and open to all children.”

Teachers in states with more restrictions can feel powerless to speak up — or find the context behind current events too fraught for the classroom. Verdaillia Turner, the president of the Georgia Federation of Teachers, said that she would not discuss the Buffalo mass shooting from a racial or political perspective. The gunman allegedly wrote that both of these issues influenced him to drive three hours to predominantly Black East Buffalo to hunt down residents.

“We won’t get into that racial stuff,” Turner said. “We are getting to the fact that killings are wrong. I don’t care who’s doing it.”

Blaming White people, she said, will only serve to “separate the country more.” She questioned whether students would bring up the Buffalo shooting to their teachers, saying that Atlanta children routinely face gun violence that doesn’t make national news headlines. Of Georgia teachers who are taking to social media to discuss the impact of the shooting on them and their students, Turner said they should talk to their administrators.

In her experience as an educator, she said, students don’t typically want to discuss gun violence unless they personally know the victims.

But Arora said that events like the Buffalo shooting have far-reaching effects. “It’s particularly relevant for children of color — this incident that happened,” she said.

The Buffalo gunman drew comparisons to other mass killers motivated by race, such as the White man who drove from several hours away in 2019 to kill mostly Mexican American and Mexican shoppers at an El Paso, Texas, Walmart. The COVID-19 pandemic has also coincided with a rise in anti-Asian hate crimes, including a mass shooting at Atlanta area spas with mostly Asian and Asian American workers last year.

As educators struggle with the right words to say to students or whether to comment on the mass shooting at all, Arora said they should know they are not alone, especially those coping with their own grief over the violence. She advises teachers to find like-minded educators who can offer mutual support at this time. They can also brainstorm ways to broach sensitive topics in class in a manner that won’t lead to them being disciplined.

“How do you get administrators on board? How do you discuss this in a safe way where you feel like you’re not being fired?” she said. “How do you advocate for your profession? And I think the No. 1 thing educators need to know is that they aren’t the only ones with this challenge.”

In Buffalo, Townsend is listening to students and affirming their observations. Some students, she said, have complained that the gunman is being described as “the shooter” and not as a “murderer.” Townsend told these students she understood their concerns. One student pointed out that hate crimes nearly always occur in communities of color.

Townsend told the student: “You’re right,” she said. “African Americans have been a target for a long time, but we’ve got to heal from this just like we do from everything else.”

She finds it shocking that teachers would be barred from discussing Buffalo in class and feels strongly that they should.

“How is a person going to know how to handle a situation if it’s not talked about?” she asked. “Students need to know how to move forward. If a student brings a subject up, it should be discussed, because they want to know about it. And when you have knowledge, you have power.”