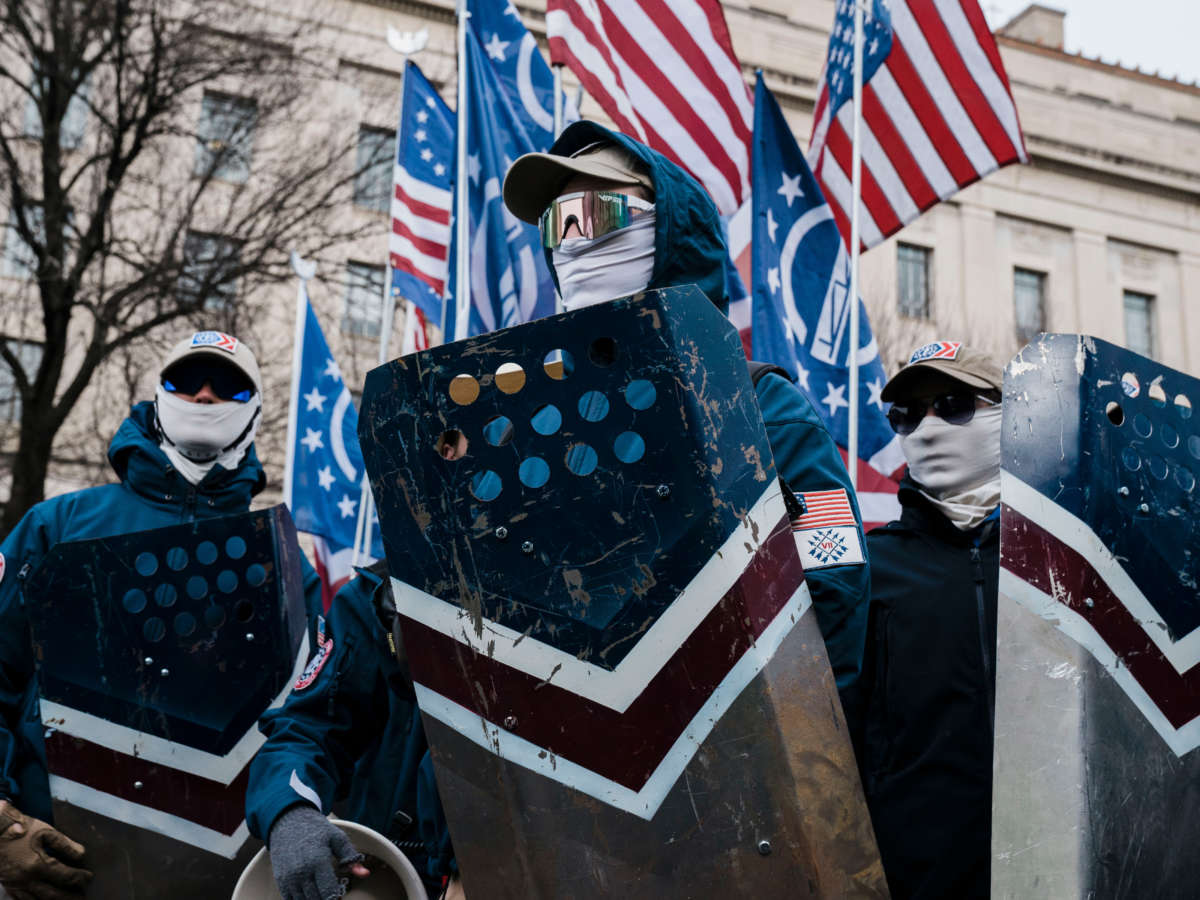 Idaho authorities on Saturday arrested 31 alleged members of the white supremacist Patriot Front after they were found in the back of a U-Haul truck with riot gear.

Video published online showed police opening the back of the truck to discover dozens of masked men in matching Patriot Front outfits and riot gear in Coeur d’Alene. The truck was stopped near an Idaho Pride event. Officials at a news conference alleged that the group planned to riot at the park where the event was held, as well as other locations. The men were equipped with shields, shin guards, and at least one smoke grenade, according to police.

“It is clear to us, based on the gear that the individuals had all with them, the stuff they had in their possession and in the U-Haul with them, along with paperwork that we seized from them, that they came to riot downtown,” Coeur d’Alene Police Chief Lee White told reporters.

Police stopped the truck after a report from a tipster who said “it looked like a little army was loading up into the vehicle” of a hotel parking lot, White said. “I don’t think this would have been as successful had we not had one extremely astute citizen who saw something that was very concerning to them and reported it to us,” he told reporters.

Authorities had also received information “over the last couple days that there were a number of groups that were planning to disrupt today’s activities,” he added.

“If you go online, look up ‘Patriot Front,’ that’s exactly how these individuals are dressed,” White said.

“It appears these people did not come here to engage in peaceful events,” said Kootenai County Sheriff Bob Norris.

Norris on Sunday released mugshots of the men and a list of all their names and addresses.

All of the men were charged with conspiracy to riot, a misdemeanor, and have since bailed out, according to White.

These are the faces and names of the members of the neo-nazi cult Patriot Front who were arrested yesterday in Idaho for conspiring to riot at a Pride event.

Full size images (and the guy who didn’t fit neatly in collages) in the Facebook link.https://t.co/3yeLnXvQuR pic.twitter.com/hghiYx3zLY

Among those arrested was Patriot Front leader Thomas Rousseau. Another arrestee, Mitchell Wagner, was previously arrested for defacing a mural of famous Black Americans at a St. Louis college last year, according to the Associated Press.

Only one of the men was from Idaho, White said. The others were from 11 states, including Washington, Oregon, Texas, Utah, Colorado, South Dakota, Illinois, Wyoming, Virginia, and Arkansas.

The group’s members perceive Black people, Jews, and the LGBTQ+ community as enemies, John Lewis, a violent extremism expert at George Washington University, told the AP. They typically find “local grievances to exploit, organizing on platforms like the messaging app Telegram and ultimately showing up to events marching in neat columns, in blue- or white-collared-shirt uniforms, in a display of strength,” he explained.

Patriot Front and other far-right groups have increasingly focused on anti-LGBTQ rhetoric.

“That set of grievances fits into their broader narratives and shows their ability to mobilize the same folks against ‘the enemy’ over and over and over again,” Lewis said.

The Idaho arrests come amid a growing number of anti-LGBTQ+ incidents during Pride month by right-wing extremists. The same day, police said five men believed to be members of the Proud Boys — whose leaders and members were charged with violence and conspiracy in the deadly Jan. 6 Capitol riot — disrupted an LGBTQ event called Drag Queen Story Time for preschoolers in San Francisco.

“The men made homophobic and transphobic remarks against a member of the LGTBQ+ community who was hosting the event,” Alameda County Sheriff’s Dept. Lt. Ray Kelly told KGO-TV. “There was no physical violence. Deputies responded to the disturbance and are conducting follow up to identify the group of men and their affiliation.”

Kelly added that the department is investigating the incident as a hate crime and “will also address the annoying and harassing of children.”