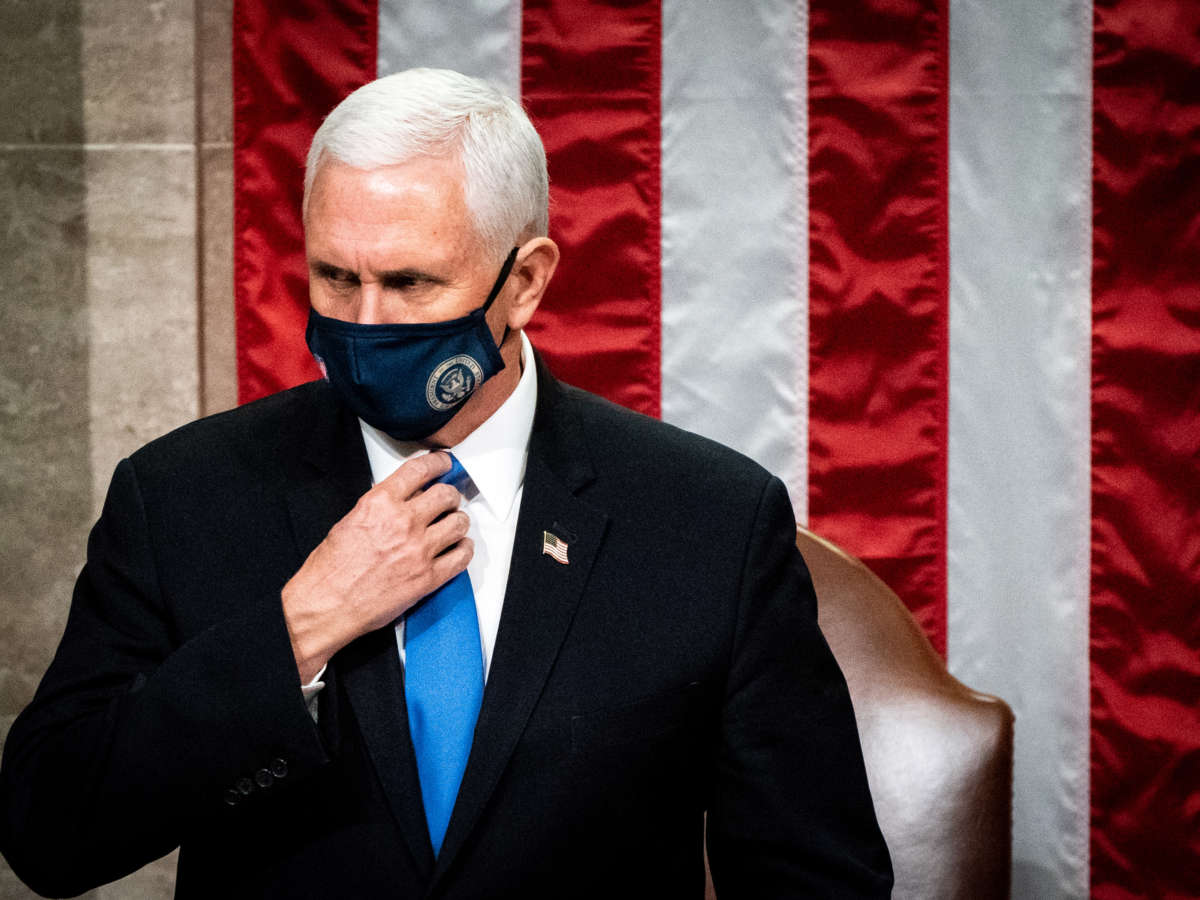 A new photo obtained by ABC News shows former Vice President Mike Pence and his family in hiding during the attack on the U.S. Capitol building on January 6, 2021.

Pence, along with his daughter, his brother Rep. Greg Pence (R-Indiana) and his wife Karen Pence, are shown in the vice president’s ceremonial office inside the Capitol. The photo was taken shortly after Pence was evacuated from the Senate chambers due to the violent breach of the building by a mob of loyalists to former President Donald Trump.

By the time the photograph was taken, the mob’s chants to “Hang Mike Pence” had already begun.

Pence sits at a table while his daughter rests on a couch in the background, visibly upset over what has transpired. Karen Pence is seen closing drapes over a window in the room in order to prevent rioters from seeing them inside.

In this photo, taken minutes after VP Pence was evacuated from the Senate Floor, Karen Pence closes the curtains. A person in the room told me she could see the mob outside and was fearful they would see where Pence was. pic.twitter.com/RJs2nitAmE

Minutes after the picture was taken (by Pence’s former official photographer Myles Cullen), the family was moved to a more secure location — a loading dock beneath the Capitol, ABC News reported.

Hours later, Pence would return to Congress, along with other lawmakers. Reopening the certification ceremony, he delivered a speech, describing the day’s horrors as a “dark day in the history of the United States Capitol.”

The photo highlights the gravity of the day’s events, Rep. Zoe Lofgren (D-California), a member of the January 6 committee investigating the attack, said on CNN on Wednesday night.

“I think the public probably is not aware how close a call this was,” Lofgren said. “The rioters came very close to capturing the vice president and I think there’s very good evidence they would have done harm to him, perhaps even killed him.”

The mob of Trump loyalists had been angry with Pence because Trump had spent the past several days repeatedly — and falsely — asserting that Pence could alter the outcome of the 2020 presidential election, which Trump lost to now-President Joe Biden. The Constitution does not allow a vice president to change or reject individual states’ Electoral College votes, and their role in the certification ceremony is largely a symbolic one.

White House aides have said that Trump was pleased with chants from his followers to hang the vice president, and that he gleefully watched the violence unfold on television safely from the White House. Earlier this year, Trump said in an interview that it was “common sense” for his loyalists to call for Mike Pence to be hanged.

“How can you pass on a fraudulent vote to Congress? How can you do that?” Trump said. Notably, no evidence of fraud in the 2020 election has ever been discovered.