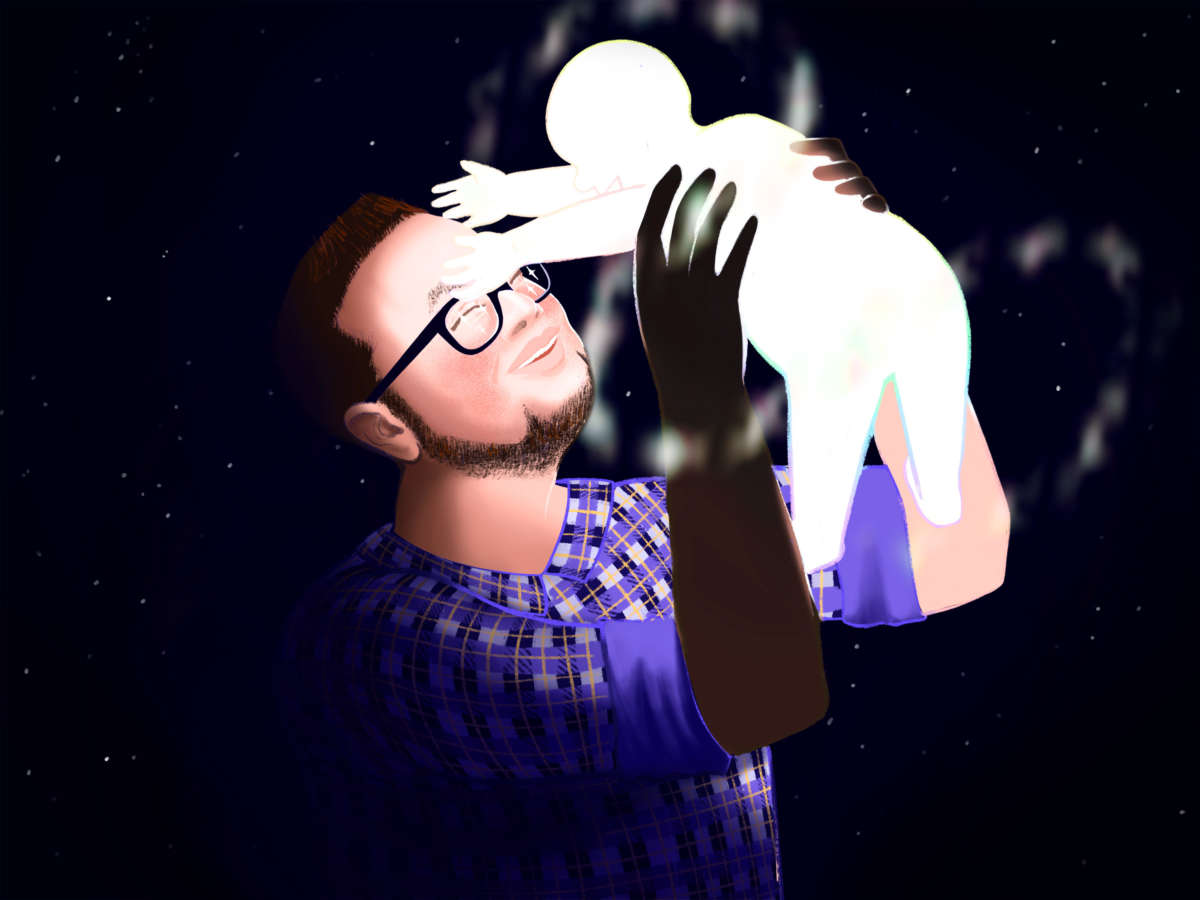 Ever since I was a little girl, I dreamed of being a father one day.

My own father was emotionally distant, traumatized and neglectful. He was also the person who taught me about modern art, comedy, existential philosophy and how to find the constellations in the night sky. He spoke to my sibling and I as if we were his colleagues at the university where he taught, took us on dangerous adventures, and taught us to revere the vast wonders of nature and the inner mysteries of human consciousness.

Even before I knew I was trans, I was attracted to fatherhood. My own dad was the person my individual solar system revolved around. To me as a child, being a father one day meant simultaneously embodying all the things my father was, as well as compensating for the things he had failed to offer. I vowed I would follow in his footsteps and teach my own child about awe and art, but also offer safety, protection and unconditional love.

As a nonbinary adult and a parent of a 4-year-old, I have a more realistic view of fatherhood. I am aware of the misogyny that made motherhood look bad to me, and why fatherhood seemed so appealing as a child. However, I haven’t let go of the dad fantasy entirely. Nowadays, I am attracted to being a nonbinary dad for some of the same reasons that I am drawn to being a rabbi. I enjoy creatively expanding on traditional roles. I like being a dad who is not a man, in the same way I take pleasure in being a rabbi who doesn’t look or sound like what people expect a rabbi to be.

I go by the title “abba” to my kid, which means “father” in Hebrew. Traditional Judaism is certainly patriarchal, however, there are surprisingly complex images for fatherhood in Jewish sacred texts. The ancient rabbis divided the world into binaries, but they also acknowledged that not everything fit into these categories and pages and pages of sacred text are devoted to exceptional cases: foliage in between bud and flower, twilight times in between day and night, and genders beyond male and female.

In the Talmud, a central Jewish holy book which was compiled around the 5th century CE, we learn that the first mother and father of the Jewish people, Abraham and Sarah, were originally, tumtumim. The tumtum is one of six genders that appear frequently in Jewish texts and are integrated into all parts of ancient Jewish civil life. Our first parents are said to have slowly transitioned to become male and female like a rock that is worn down by flowing water.

Another story is told in the Talmud of a poor woman who died tragically during childbirth. Her grieving husband was left with a newborn infant and no money to pay for a wet nurse. Because of his love for his child, a great miracle was performed on his behalf and he sprouted “two breasts like the breasts of a woman, and he breastfed his child.”

I like being a dad who is not a man.

One of the primary names for God in Jewish tradition is Av HaRachmim, which means compassionate father. Rachamim, the Hebrew word for compassion, most literally means womb-like. Wombs are an image for compassion in Hebrew because when we are in utero all our needs for care, feeding, protection and love are offered without asking for anything in return.

These Jewish images for fathering powerfully resonate with me. Both a dad who sprouts breasts to feed his child and a compassionate father-God with a womb, imagine a dad as someone who offers the unconditional love and protection that I longed for as a child. On top of this, the vivid imagery and gender playfulness of these stories makes use of the type of creativity and humor that I inherited from my own dad, and still see as central to the role of nurturing a young mind.

These images are particularly relevant in the U.S. in 2022, where kids are “protected” from queerness, health care, masks, sports and books, but not guns or COVID-19. Right now, children are being kept away from exactly the kind of curiosity and exploration that I believe they need the most. At the same time, their physical safety and existential security is being sacrificed for the so-called individual rights of their parents. Children themselves have no individual rights in this deadly equation.

As a rabbi who tends to grieving and dying, I see the tragic consequences of this thinking in my work. I officiate at a lot of funerals for trans and nonbinary kids who died by suicide because of despair and a lack of options. My grief groups are filled with mourners who tell stories of memorial services for trans kids, where parents misgendered their kids and used the same dead names that led to the anguish that killed their children. As a parent I find this incomprehensible; there is nothing I want for Father’s Day more than for my child — and all children — to be alive and happy.

As a rabbi who tends to grieving and dying, I officiate at a lot of funerals for trans and nonbinary kids who died by suicide because of despair and a lack of options.

The Trevor Project, the world’s largest suicide prevention and mental health organization for LGBTQ+ youth, found in a 2021 report that a sobering 52 percent of trans youth have seriously considered suicide in the past year. However, the proportion of trans youth considering suicide falls to levels that are similar to their cisgender peers if you consider only those youth who have access to basic supports, such as living with family members who respect their pronouns and having access to gender affirming medical care. The year 2022 is on track to be the deadliest year ever for trans and nonbinary kids in the U.S., with 300 pieces of anti-trans legislation currently being proposed, 140 of which directly target the things that support the mental health of trans youth, such as access to gender affirming health care or participation in sports that foster a sense of belonging.

For now, my own kid is still blessedly sheltered from the harshness of the world. He festoons his fire trucks with glitter and layers four skirts under his construction uniform, without any idea that he is mixing gender tropes. He and his friends change names and pronouns daily with no sense that there is any other way to live. My partner and I only recently introduced him to gendered words for people, like “woman,” “boy” and “nonbinary.” Shortly afterwards, he pointed to a character in his book and asked: “Is that person a binary?” At the moment, it is binary gender that is the exception for him.

It’s my partner’s and my job to protect his innocence as long as possible. I strive to give my child as much room to explore as I can, while helping him know he is safe and loved unconditionally. To me, that is what it means to be a father.

The US Is in the Midst of a “Shock-and-Awe Judicial Coup,” Naomi Klein

Artists are helping to make Magic: The Gathering more expressive — and fun

The US Is in the Midst of a “Shock-and-Awe Judicial Coup,” Naomi Klein

Artists are helping to make Magic: The Gathering more expressive — and fun