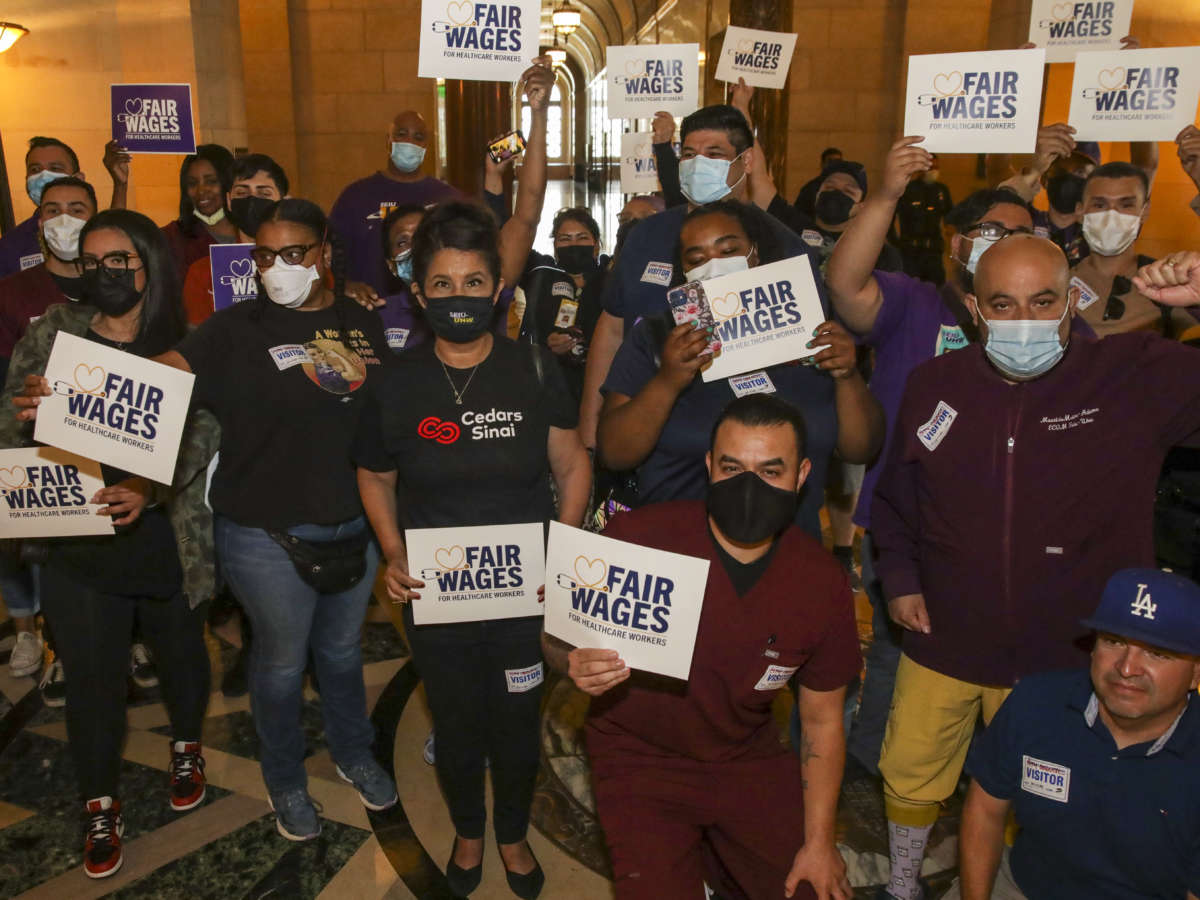 Marking the 13-year anniversary of the last federal minimum wage increase in the U.S. — a meager boost from $5.15 to $7.25 in 2009 — progressive campaigners on Sunday urged congressional Democrats to make another push to raise the national pay floor as inflation continues to diminish workers’ purchasing power.

“Today is a sad anniversary in the United States,” said Morris Pearl, chair of the Patriotic Millionaires, a group that advocates progressive economic policy. “For 13 years now, Congress has failed to act to raise the $7.25 hourly federal minimum wage. Lawmakers have turned their backs on America’s tens of millions of low-wage workers and revealed themselves to be beholden to the short-sighted interests of some of their ultra-rich donors.”

According to a recent analysis by the Economic Policy Institute (EPI), the real value of the federal minimum wage is currently at its lowest point in nearly seven decades amid record-high inflation, which spurred a decrease in real average hourly earnings between June 2021 and June 2022 as corporate profits soared.

In 2021, Senate Democrats stripped a proposed $15 federal minimum wage from their coronavirus relief package on the advice of the chamber’s parliamentarian, an unelected official tasked with offering non-binding opinions on whether legislation complies with Senate rules.

Eight Senate Democrats joined Republicans in voting down Sen. Bernie Sanders’ (I-Vt.) last-ditch attempt to reinclude the provision, which was approved by the House.

The federal minimum wage has been stuck at $7.25 for 13 Years – just $15,080 a year if you work full time – as the cost of living rises
The last increase was July 24, 2009. This is the longest period in history without a raise by far.
It’s way past time to #RaisetheWage pic.twitter.com/vCmX0jZ0gR

Amid more than a decade of federal inaction, states and localities across the U.S. have raised their hourly wage floors in response to pressure from the grassroots Fight for $15 movement.

But $7.25 an hour remains the prevailing minimum wage in 20 states. The tipped subminimum wage is still $3 an hour or lower in 22 states.

Had the federal minimum wage risen at the same rate as Wall Street bonuses, it would now be $61.75 an hour instead of $7.25. If the minimum wage had kept pace with worker productivity since 1968, it would have been around $23 an hour last year.

“Regressive politicians across this country have kept our wages down for years,” Fight for $15 wrote in a Twitter post. “That’s why it’s important that we get at least $15/hour federal minimum wage. That way no one gets left behind.”

Morris of the Patriotic Millionaires said Sunday that “$7.25 was already inadequate back in 2009 when the minimum wage was last raised, but now it is downright deplorable.”

“Since 2009, workers have endured the Great Recession, a worldwide pandemic, historic inflation, and massive changes in the cost of living,” Pearl added. “And what have they gotten in return? A minimum wage that is worth 27% less than its 2009 value, one that now isn’t enough to afford even a single-bedroom apartment in 93% of the country.”

“In the face of rapidly rising costs for American families, Congress must act to raise wages for the tens of millions of workers who are struggling just to get by. They must immediately raise the federal minimum wage to at least $15 an hour. Our country cannot afford to reach a 14th anniversary of $7.25.”

And if congressional Democrats can’t muster “the political will” to raise the federal minimum wage to at least $15 an hour — a move that would boost the incomes of more than 30 million people across the country — “then the president must act,” said Pearl.

“When President Biden came into office, he raised the minimum wage for employees of federal contractors to $15,” he pointed out. “Given the rising cost of living, he should now raise the minimum wage for federal contractors even higher, to no less than $20 an hour. This move will benefit hundreds of thousands of workers, prove to voters that Democrats care about working people, and provide a strong example to spur Congressional Democrats to action.”

“The president,” Pearl added, “is supposed to be the leader of our country — it’s time for Biden to lead on this critical issue.”