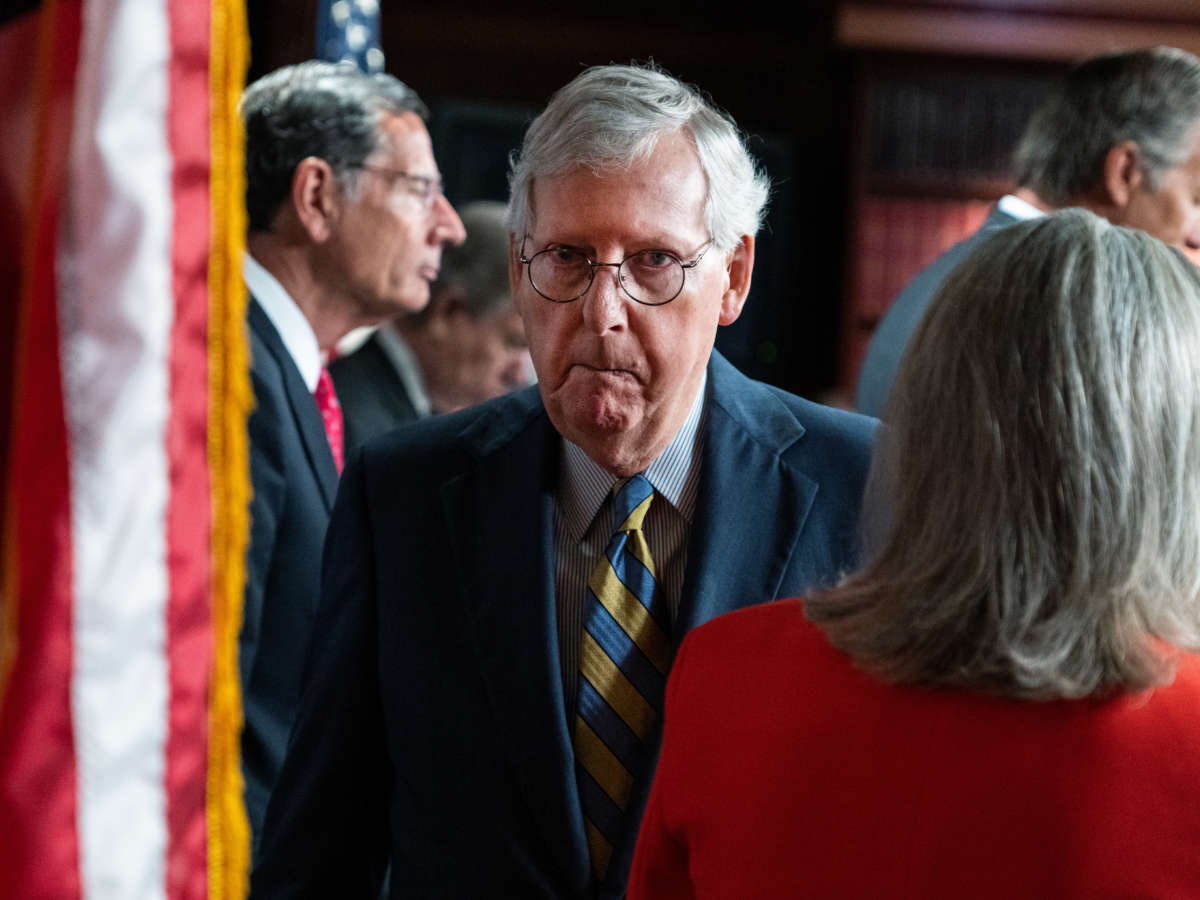 For months now, President Biden’s ambitious economic and social justice reforms have been whittled down and whittled down again. Each time a major policy package is put together, with hopes that it can pass with only 51 Senate votes via the budget reconciliation process, it ultimately runs afoul of Senators Joe Manchin and Kyrsten Sinema.

Last week, desperate for concrete policy achievements to lay before voters before the midterm elections, the Democrats settled on a dramatically smaller package of reforms, centered around lowering pharmaceutical drug prices for Medicare consumers, that the two recalcitrant senators appear more willing to sign off on. Then, a few days later, on July 27, after months of obstruction, Senator Manchin announced that he will now support a scaled-down version of Build Back Better that would still include both hundreds of billions of dollars of climate change legislation investments and also the health care package that is near and dear to his heart. Provided that Sinema remains on board — and given her track record this year, that’s by no means a given — and provided that moderate Democrats in the House don’t balk on some of its tax provisions, the Democrats may finally have a narrow window to pass significant climate legislation and health care reforms via the budget reconciliation process, which allows financial packages to pass in the Senate via a simple majority.

If this legislation, titled the Inflation Reduction Act of 2022, does indeed become law, the health care side of it will allow the Health and Human Services Secretary to negotiate, on behalf of Medicare, discounts on many drugs (10 popular drugs in the first few years, then 15, and finally 20 after that), and will establish financial penalties that can be levied against Big Pharma companies that increase their prices by more than the rate of inflation. These provisions will, according to the nonpartisan Congressional Budget Office, save the Medicare system nearly $300 billion over the first 10 years of its existence — which is why Manchin has signed onto it as a deficit reduction and inflation-curtailing exercise.

The package of reforms will likely include an annual out-of-pocket pharmacy expenses cap of $2,000 for Medicare enrollees, a provision that is both massively politically popular and also economically sound, as medical costs continue to be a driver of personal bankruptcies in the U.S. It will also extend Affordable Care Act (ACA) enrollment subsidies for an additional two years, a move vital to keeping millions of people who first enrolled in ACA insurance systems during the pandemic on health plans they can afford.

One would think such reforms would have cross-party buy-in, given the amount of money they will save both the government and individual Americans, and given the political popularity of the proposals. Yet, in this polarized era, virtually no policy ends up with bipartisan support. Thus, the very real possibility exists that no Republican senators, including so-called moderates such as Susan Collins, Lisa Murkowski and Mitt Romney, will end up voting in favor of the legislation when it is debated later this summer.

GOP opposition is fueled by Big Pharma’s disingenuous arguments that price caps will negatively affect research and development efforts for new drugs, putting in place disincentives for companies to invest in products that will then, at some point, end up having price limits imposed on them. Of course, this argument holds no water in relation to the research and development efforts funded by the government or, for that matter, privately funded drug development that generates rates of profit that most other industries can only dream of, and that, even with some limited price caps, will continue to generate huge rates of return on new drugs.

Last year, as Democrats developed their (ultimately doomed) ambitious economic package, Big Pharma spent tens of millions of dollars lobbying against the parts of the package related to drug pricing. They aggressively courted politicians of both parties and hired many ex-campaign staffers from across the political spectrum. Arizona Sen. Kyrsten Sinema, in particular, was showered with hundreds of thousands of dollars of contributions, and, ultimately, came out against her party’s big-picture reform package.

The better part of a year later, however, Democrats are banking on Sinema’s support for the proposed legislation, though she hasn’t yet explicitly committed to voting for the Inflation Reduction Act. And while many Democrats do, of course, continue to maintain deep ties to the pharmaceutical industry, this summer it’s the Republican Party that has fully embraced the industry’s claims that any and all efforts to negotiate lower prices will inevitably stymie research and development of new drugs.

That it is untenable for people in the U.S. to continue going bankrupt over medical costs as they pay more for prescription drugs than do people anywhere else on Earth.

If and when the legislation comes up for debate in the Senate — which it will, as soon as the Senate Parliamentarian signs off on the changes as being of a sort that the Democrats can pass via the budget reconciliation process — it’s likely to run into a unified opposition from Mitch McConnell’s foot-soldiers. Since McConnell knows that he can’t block legislation greenlighted for budget reconciliation, his Plan B appears to be to hold other legislation hostage, and he has threatened to block other vital Senate business this summer if the Democrats move ahead with their plans to legislate on drug prices via the budget reconciliation process. McConnell is saying he must engage in this retaliation as a way to stymie the Democrats from imposing what he calls “socialist price controls,” according to Fox News.

It’s a disingenuous argument. Big Pharma is among the most profitable industries on Earth, and its ability to yank up drug prices unhindered has, in recent years, generated huge windfalls. Many of these will remain even with negotiated price discounts; and the industry will continue to be a cash cow for investors. After all, there’s a tremendous amount of financial fat on this particular bone. Witness that from 2009-2018, the average price of a brand-name prescription drug sold via Medicare increased from $149 to $353, far in excess of inflation. That over the course of the past decade, the big drug companies have seen an average annual rate of return on shares of 11 percent. And that many of the biggest names in the game have seen profit margins in excess of 25 percent in recent years.

In their more honest moments, many GOP senators acknowledge this reality. As recently as last month, Mitt Romney put his support behind an amendment to the Food and Drug Act, titled “Advancing Affordable Medicines for Families Act,” that would promote nonprofit generic drug companies as a way to both lower drug costs and accelerate the development of new, affordable pharmaceutical products. In 2019, during the Trump presidency, Romney introduced another bill, the Prescription Drug Rebate Reform Act, which he described as an attempt to bring “transparency to drug pricing” and to lower the out-of-pocket expenses faced by consumers.

In 2019, Lisa Murkowski voted for the Lower Health Care Costs Act, designed to stop the atrocious practice of surprise billing and to increase prescription drug competition as a way to lower prices.

But despite these glimmers of the possibility for a vein of pragmatism running through the moderate wing of the GOP on this issue, so rigid is McConnell’s leadership method that he is corralling his moderates to oppose the legislation even though many of these same individuals generally support the principles behind the health care reforms.

It should be obvious to politicians on both sides of the aisle that it is untenable for people in the U.S. to continue going bankrupt over medical costs as they pay more for prescription drugs than do people anywhere else on Earth. And yet, as the midterm elections near, the Republican senators under McConnell’s obstructionist leadership are so wedded to stymieing Democratic-led initiatives that they appear committed to oppose legislation that offers a meaningful pathway to lower drug costs for millions of Americans. It is, unfortunately, yet another example of the dysfunction into which the Senate as a legislative body has descended.