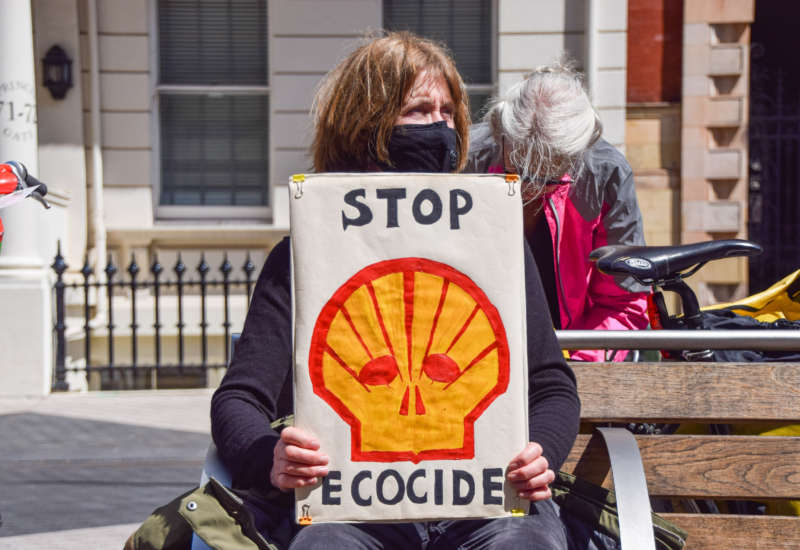 A Dutch court ruled on Wednesday that oil giant Royal Dutch Shell must cut its carbon emissions in what climate advocates say is an unprecedented decision.

A district court in The Hague ordered that Shell must cut its emissions by 45 percent of 2019 levels by 2030, in line with recommendations from the Intergovernmental Panel on Climate Change to limit global warming by 1.5 degrees Celsius.

The court ruled that the cut must come from not only the company’s own emissions but also emissions from its products. The ruling applies to the entire Shell group, which is incorporated in the U.K.

This would be a dramatic acceleration of the company’s own plans to cut emissions. The company has pledged to cut only 20 percent of its carbon emissions by 2030, including emissions from the burning of its products, but climate advocates have warned that the company may still skirt its own pledges. Indeed, the judge found that the company’s climate pledge is “not concrete enough and full of caveats.”

“This is a landmark victory for climate justice. Our hope is that this verdict will trigger a wave of climate litigation against big polluters, to force them to stop extracting and burning fossil fuels,” said Sara Shaw, a program coordinator for Friends of the Earth, in a statement.

Legal experts say that the decision could have far-reaching implications for the oil industry.

“This is a turning point in history,” Friends of the Earth Netherlands lawyer Roger Cox said in a statement. “This case is unique because it is the first time a judge has ordered a large polluting corporation to comply with the Paris Climate Agreement. This ruling may also have major consequences for other big polluters.”

The company says that it plans to appeal the ruling and a spokesperson has said that the company is investing money into renewable energy projects. They plan to grow these products “even more quickly,” said the spokesperson.

The ruling wouldn’t be an imposition, however, if the company were actually planning to reduce its emissions quickly and in good faith. Oil companies’ pledges to reduce their carbon emissions are often little more than public relations ploys to buy social license to operate.

Further, their pledges are carefully worded so that they don’t promise zero emissions — rather, they pledge net zero emissions. That means they can still plan to increase their fossil fuel production, as they have, while working on reducing emissions elsewhere, all without technically breaking their pledges.

Climate advocates have pointed out that the oil companies’ pledges are completely insufficient to mitigate the worst effects of the climate crisis. As the usually conservative and influential International Energy Agency recently wrote, new fossil fuel projects must stop immediately in order to stick to the global goal of 1.5 degrees Celsius of warming, which is still enough to cause catastrophic damage. But fossil fuel companies, of course, have pledged no such thing.

If rulings like Wednesday’s decision are enforced and spread across the world and the energy industry, it could set powerful legal requirements for the companies to make and stick to climate goals.