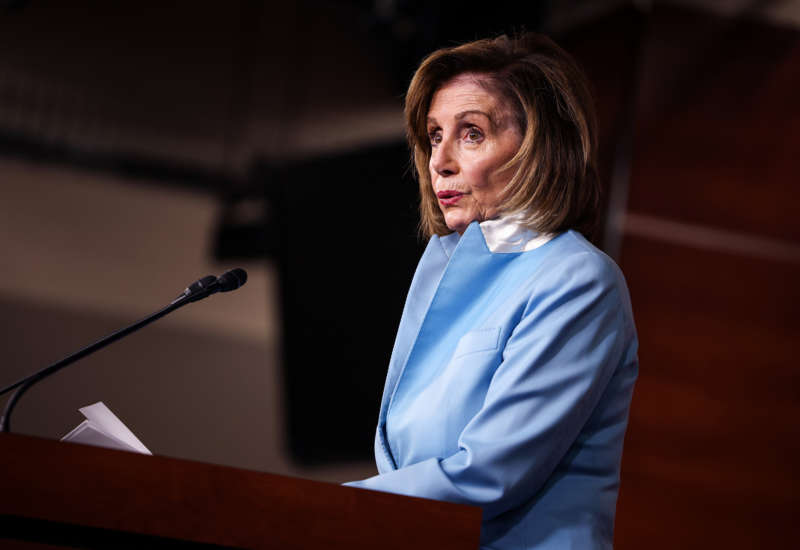 The final act of a showdown between House Speaker Nancy Pelosi and nine rebellious “moderate” House Democrats is coming to a head this week, as the chamber barrels toward a procedural vote that will either forward or doom President Biden’s $4 trillion infrastructure/budget plan. If the plans pass the procedural vote, the infrastructure and budget bills will be drafted over the course of many weeks. If the procedural vote goes down, it may be damn near political Armageddon for the Biden administration and the Democrats in general.

Speaker Pelosi has signaled her intention to bring both bills up for a vote simultaneously, a “dual track” that would dramatically expedite the process. This move is important given that many of the most crucial provisions dropped from the infrastructure bill — priorities pertaining to the climate crisis and fulfilling basic human needs — are contained in the budget resolution. But the move has, predictably, drawn the seeming ire of nine House members — Josh Gottheimer, who leads the effort, Filemon Vela, Henry Cuellar, Vicente Gonzalez, Ed Case, Jared Golden, Jim Costa, Carolyn Bourdeaux and Kurt Schrader — who argue that the bills cost too much and should be pared down before attempting reconciliation with the Senate.

The Gottheimer group backed this assertion with an editorial in Sunday’s Washington Post: “Time kills deals,” they wrote. “This is an old business saying and the essence of why we are pushing to get the bipartisan infrastructure bill through Congress and immediately to President Biden’s desk — as the president himself requested the day after it passed the Senate.”

The irony is palpable. For months, conservative Democrats like this group pushed back hard on the cost numbers on these bills, delaying them frequently though not fatally. Now they want a quick bill for Biden to pass because “Time kills deals.” It’s not what you say, I guess, but when you say it that matters to this crew.

I say “seeming ire” because all too often actions like this by House members amount to little more than grandstanding, an attempt to wedge something they want into the bill, or just to see their names in the papers for a few days. As the time of reckoning has drawn near, however the Gottheimer group has held fast. Senators Joe Manchin and Kyrsten Sinema have been coaching these nine House members on how to gum up the gears. Those nine could not have asked for a better obstructionist education.

Meanwhile, Pelosi has been under pressure from the House Progressive Caucus, which has signaled its intent to vote against the package if both elements are not considered simultaneously. Thankfully, for the moment, Pelosi appears to be siding with them, if only because of the numbers involved.

If those nine House Democrats successfully defeat the procedural vote and Pelosi can’t scoop up enough GOP votes, the Biden administration will have to deal with calamity both at home and abroad.

The Progressive Caucus enjoys more than 100 House members, far outstripping the muscle being brought to bear by the Gottheimer group. With its sizable membership, the Progressive Caucus has enormous influence over any bills that come along, due to the Democrats’ slim majority in that chamber. It is easier for Pelosi to wrangle nine votes from some “rebels” than from that large and — on this issue — largely unified group.

This is most especially true of the budget bill, progressive support of which is virtually ironclad. There is good reason for this: The bill will, in many ways, change the face of the country. It delivers vitally needed funds “to help parents and children, including new funds for child care, universal prekindergarten and paid sick leave,” reports The Washington Post. “On health care, meanwhile, Democrats hope the budget fosters a major expansion of Medicare so that it can cover dental, vision and hearing benefits, along with new prescription drug rules that might lower the cost of medicine for seniors.”

The budget bill also dramatically increases spending on issues related to climate change, such as pollution and alternative energy sources. This is essential to the Progressive Caucus, after they watched most of the climate-related material get dropped from the infrastructure bill by a cohort of “moderates” in the Senate.

“There is no way we can pass those bills unless we do so in the order that we originally planned,” Pelosi said to her leadership team during a private call on Monday. “This is no time for amateur hour. For the first time, America’s children have leverage. I will not surrender that leverage.” In fact, if the nine stick to their guns, Pelosi may well go looking for nine Republican House votes to fill the gap. She may be able to do it, too; the bills are incredibly popular across the political spectrum.

“This is the path forward: we’re passing the bipartisan infrastructure bill alongside the jobs and families package. Period,” Progressive Caucus Chair Pramila Jayapal said last week. “The American people expect us to deliver on child care, paid leave, housing, healthcare, climate action, and more — and we must.”

The stakes could not be higher. On the domestic end, if the procedural vote loses, Biden’s signature legislation attempt will have been defeated by members of his own party. Abroad, the grim aftermath of the U.S. withdrawal from Afghanistan continues to dominate the news. Such a twin-bill calamity could make life much easier for Republicans in the 2022 midterms.

However, if these bills survive this procedural vote, a crucial step will have been taken. It will represent a victory for Pelosi, the president and most Democrats, but far more importantly, it will represent a bit of much-deserved daylight for the people of this country who have waited a long, long time for desperately needed help.

Nancy Pelosi is making the biggest gamble of her political life. We will find out soon where the dice fall.